The garden of Iturraran, result of a hobby

The peony or thick shoe needs a rather hard winter to complete its life cycle. If we read about the living conditions of the Abyssinia banana, we would note that it does not actually withstand temperatures below 15 degrees. Therefore, presumably they could never grow and live together. Well, in the botanical garden of Iturraran, both are very close, and do not live very strong.
The garden of Iturraran, result of a hobby
01/04/2008 | Lakar Iraizoz, Oihane | Elhuyar Zientzia Komunikazioa 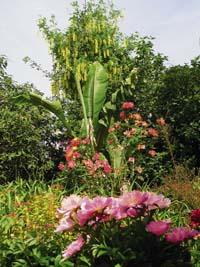 Peonies and Abyssinia banana next door in Iturraran.
P. Garin

The mild climatic conditions of the Pagoeta area make it possible for plants of incompatible environments themselves to live together without any problems. Throughout the year the temperature drops below zero about a dozen days and in summer it does not rise too much. With about 4,500 trees and shrubs from around the world in the botanical garden of Iturraran, one of the richest species gardens in a large space, its collections of oaks and maples are among the two or three best collections worldwide.

The garden, today so rich, started from a hobby of Paco Garin, responsible for the management of the park of Pagoeta, in the winter of 1986. The team of the park decided to plant some ornamental trees in the surroundings of the newly acquired farmhouse Iturraran, colorful trees in autumn: maples, bridges, etc.

They started with small plantations of this type, but Garin had a great fondness for the trees and gradually they were planting trees and shrubs brought from one place and another around the hamlet that is now center of interpretation and welcome of Iturraran. Also began to make collections of certain types of trees, such as oak, heavier, liquid, etc.

As soon as they realized, they had enough plants to make a small garden, and they dedicated themselves to it. The garden was divided into eight areas, each of which was assigned a type of main tree: area of oaks, agile, mimosas, Mediterranean plants, elms and walnut, rosaceae (cherry, apple, etc.) and palm trees, heather and conifers. 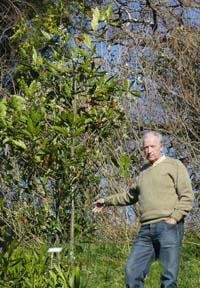 Paco Garin with Quercus guliemi-treleasei. In Europe there are no other trees of this species.
P. Garin

At first it was very easy to follow this distribution, but the collections were getting bigger, and the origin of the plants of each type and the demands grew. They saw that it was impossible to share all kinds of plants. For example, they had defined a specific area for oaks. But when they brought the tropical oaks they realized that they could not stand next to the others, since the oaks area was oriented to the north and the tropical oaks could not live in those conditions. Thus, these oaks were placed on the calendar. At present, therefore, in each area of the garden predominates a type of vegetation, but among them we can see another type of plants.

Sometimes they take a long time to find the most appropriate place for a certain plant and not only because the climatic conditions of Iturraran are different from those of the original residence of the plants. The characteristics of the surrounding soil also influence the survival of the plants, since each plant is adapted to live in a soil with certain characteristics.

However, on many occasions, the adaptability of a plant depends on its adaptability and resistance. Thus, some plants have quickly adapted to the conditions of Iturraran, although they come from a climate that has nothing to do with that of here.

The garden already has about 4,500 species of plants that are expected to expand. To the extent that he is a collector, Garin's objective - or rather - is to complete the main collections of the garden. For example, you would like to gather all the oak species of the world. In total there are five hundred species of oaks that have already managed to gather half.

The plants are collected by various ways. On the one hand, in their travels around the world they seek and collect seeds from trees; on the other, they also obtain them from special nurseries for collectors, who exchange seeds and plants with other collectors of the world. In addition, during a weekend of the year, a special plant fair is held in Iturraran. Anyone can buy plants that are not sold in traditional stores and nurseries. Of course, those of Iturraran also take advantage of that. This year the fair will be held the last weekend of April, so you are still on time, reader, to get closer!

Climate is not the only limiting factor in plant welfare. The garden is located in the natural park of Pagoeta, where plants coexist with their forests of roe deer, wild boars, rabbits, etc. The garden, in principle, is fenced, but there are areas where there are gaps and, in addition, sometimes, it is accessed below the barrier.

When they are in the garden they do what they have to do, such as eating new plant sprouts. In addition, roe deer, for example, remove bark chunks from trees during heat to mark the territory. When they enter the garden, they will mark the territory and go to the rarest trees. And boars are dumped in areas of newly planted plants.

However, in Iturraran they know that they are at the center of a natural environment and that they can do nothing against it. However, they try to avoid them, for example, they have more than one tree surrounded by barriers.

They also suffer the influence of other 'bushes', which occasionally steal some of the plants they have just brought. Garin suspects that he will not be a collector of plants in the area that visits the garden and that, seeing a plant that catches his attention, takes it to his garden. 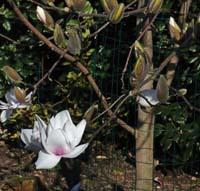 To avoid the influence of the forests of Pagoeta, more than one tree has been fenced, like the hybrid Magnolia 'Milky Way'.
P. Garin

This is very painful to Garin, on the one hand, for the rarity of some plants that steal and, therefore, because it will be almost impossible to recover the same plants, and on the other, because he does not know in what conditions the thieves will take care of them, because some even take them out in an inappropriate time or time.

Despite all these difficulties, in Iturraran you can say that they have the richest garden in the area. They do not know how long they will increase, the limit will probably be the surface of the garden: They have 25 hectares fenced and, for now, only have between 10 and 12 hectares of vegetation. Therefore, they will continue to grow and grow. For the enjoyment of visitors.

Plants under control
They know that some imported plants have adaptation problems, but they also know that others can become dangerous outside their place of origin, that is, invaders. And they don't see this possible problem. Before placing a plant at the final site, a testing phase is performed to know the necessary conditions and problems it may present. They have prepared a list of the most dangerous plants and take the necessary measures to control them, that is, they do not sell them or distribute them and cut the new plants that are born every year.
However, Garin doesn't worry too much about this issue, as he doesn't see it very difficult to control the plants they bring to the garden. Because they are quite large and grow enough to be visible from year to year.
Garden with didactic purpose
Visitors to the Iturraran botanical garden can visit all the trees and shrubs first hand. It has a road network of about 4.5 kilometers through garden areas. All exposed species are labeled with their family name, scientific name and natural distribution.

(Photo: P. Garin)
In addition, they conduct guided tours on demand, and whoever cannot get there can see the garden plants on the website (www.aiapagoeta.com) with more than 5,000 photographs, as well as the species found in the surrounding areas, outside the garden. In addition to the photographs, information about each species is gradually being introduced.
Lakar Iraizoz, Oihane
Services
241
2008
Security
027
Botany
Article
Other 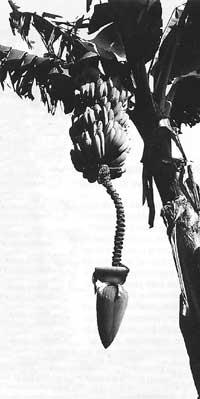 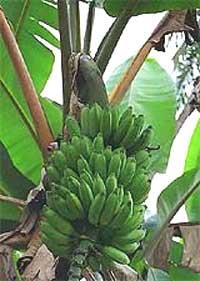