Sequestration by spill: latxas sheep in balance in the carbon footprint balance

Last January the final concentration of greenhouse gases (GHGs) in the atmosphere was again exceeded. The accumulation of these compounds, increasingly intense and, above all, possible incidents in the climate, generates concern. The sources of GHG are very varied, with livestock responsible for 14.5% of the GHG generated globally. On the contrary, not every animal has the same weight in that percentage, nor does the management of animals in the same productive system. 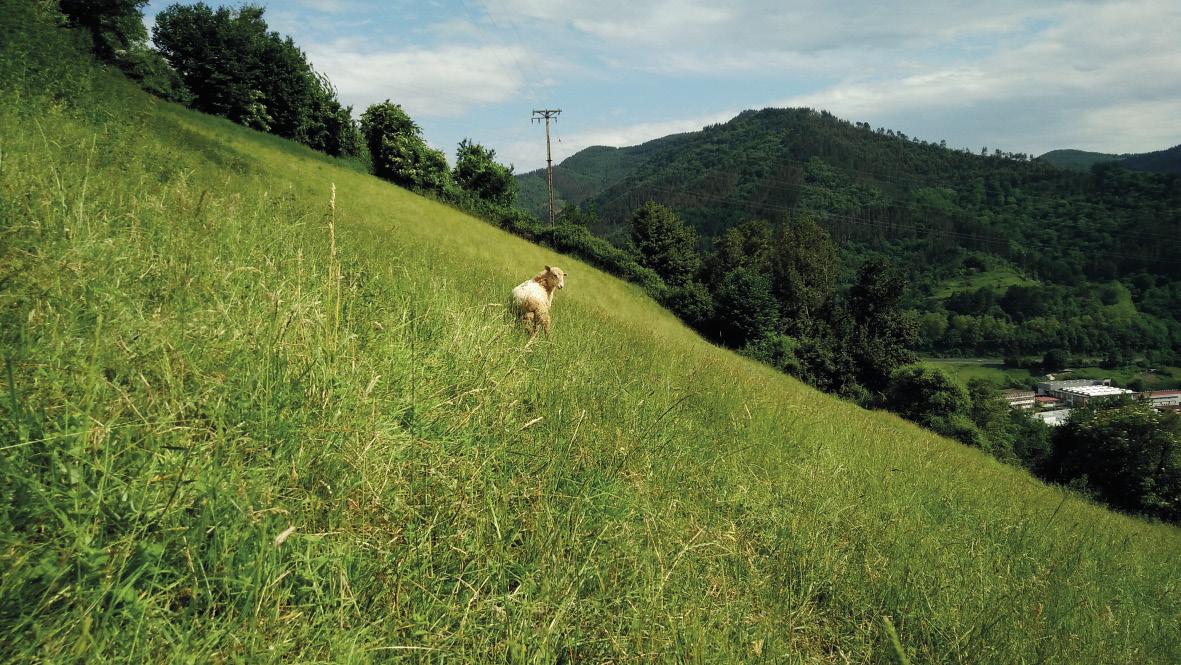 The main GHGs are CO2, CH4 and N2O, all generated in the production of livestock products. However, we are largely talking about CO2, specifically CO2 equivalents (CO2 eq), which allows us to consider all three gases in one term. Although everything is expressed in CO2 equivalents, a main distinction can be made according to the origin of GHGs, where biogenic and anthropogenic gases differ. The CO2 of animated breathing and the CH4 produced in the digestion of ruminants are biogenic gases containing short-cycle carbon (Figure 1). Unlike anthropogenic gases produced in transport and industry, these are not stored in the atmosphere for hundreds of years [1]. 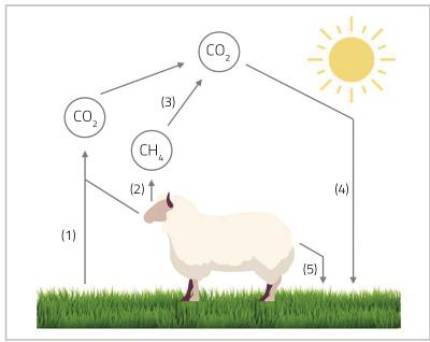 Globally, 62% of total GHG emissions from livestock come from cattle. Cattle of pigs, chickens, buffalo and small ruminants produce springs between 11 and 7%. Finally, the lowest GHG emission source, 3%, corresponds to the rest of birds not covered by the hen [2].

If we look at livestock and daily activities, we can make an interesting comparison regarding GHGs: we assume that a person consumes 0.5 kg of sheep cheese a year, which is equivalent to 30 minutes by car or 5-10 minutes by plane. What's more, the GHGs that are emitted on a normal plane trip are a catch after eating 10-20 sheep cheeses.

Figure . Gradient of the production intensity of an ovine product (milk and meat). Image courtesy of: Amaia Alberdi.

In extensive management, the staging time is minimal, the animals feed on farms and mountain pastures, prioritizing the natural life cycle of the animal. And compared to intensive production, in this case production is significantly lower. However, GHGs and environmental impacts are reduced and, of course, there are more environmental benefits allocated to livestock [3, 4], including the maintenance of grassland biodiversity, rural conservation, fire prevention and increased carbon sequestration [5].

In order to assess GHG emissions and/or CO2 equivalents, researchers use lifecycle analysis (LCA). For example, the LCA allows the analysis of any action taken in the production of sheep's milk, such as livestock feeding, waste management or herd management (Figure 3). This methodology can assess the environmental impact associated with each activity.

Figure . Among many others, the actions contemplated by the LCA are the preparation of the curated grass and the formation of the lower parts of the cattle, as well as the use of wheat deposits that condition the management of future waste. ED. : Amaia Alberdi.

The environmental benefits of livestock also have a place in the LCA. Increased soil carbon sequestration capacity is related to pasture management. In fact, the fertilization of pastures and the management of livestock mainly condition the capacity of a soil to store carbon in the form of deposits, being able to estimate by LCA and consider it a strategy of reduction of CO2 emissions equivalent.

Thus, taking into account equivalent CO2 emissions and sequestrations, the net environmental effect of an animal production system can be calculated:

In addition, in order to round off the valuation work, the net equivalent CO2 is expressed per unit of product, that is, as a carbon footprint, are both the equivalent CO2 emissions (CO2 Ballet > 0) and kidnappings (CO2 Ballet < 0) per liter of milk produced, per kilo of meat or wool, per head of lamb, according to the product to be evaluated.

The Basque Country has always been linked to livestock. Currently, with the aim of selling milk and cheese, latxas grazing is the most widespread livestock activity. In fact, although the management of latxas herds is of extensive type, in recent years a tendency towards an intensive form is being imposed on most of the apriscos of this race of great personality [6].

The location of latxas grazing is still to be determined in terms of animals, their management and GHG. For this, as a first approach and using the LCA, the carbon footprint of 20 herds of latxs has been assessed and identified in a master's final work the main sources of GHG that are generated in milk production [7].

Figure . ACV estimation of KG CO2 eq. kidnapped and discharged per liter of milk in 20 herds of latxas. The carbon footprint or net equivalent of CO2 can be calculated by combination of both (emission sequestration). They are ordered from lower to higher depending on the kidnapping/pouring ratio of the herd. Graphic: Amaia Alberdi.

However, by joining emissions and kidnappings, most latxe herds, both more intensive and extensive, resorted to similar carbon traces (3-6 CO2 eq Kg/L of milk).

Latxas sheep feeding, the main cause of GHG emissions

The origin of the equivalent CO2 emissions involved in sheep milk production differs from the weight of each. Five main sources of GHG can be distinguished: cattle reflection (second ingestion of ingested food), feed and fodder use, fertilizer, energy and straw (Figure 5). 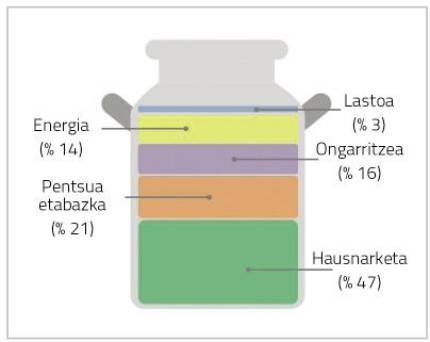 Figure . Main sources of GHG emission in sheep milk production and contribution of each of them to final equivalent CO2 emissions. Image courtesy of: Amaia Alberdi.

The complex stomach of ruminants is prepared to use the herb as a source of energy, specifically the microbial community of the stomach, that digests the food and makes it useful for the animal. However, at the same time, the CH4 that is GHG is eliminated as a by-product and its influence on total CO2 equivalent emissions is enormous (47%).

In latxe apriscos, the use of complementary feed and fodder produced outside the farm to feed livestock is increasingly widespread. As it is intensive and remote farmland, normally associated with the release of N2O and CO2. Thus, after the reflection of livestock, the use of this type of food becomes the second main source of GHG (21%). Therefore, being related both animal diet and subsequent reflection, it can be said that the food impact is 68%.

On the other hand, in the total emission of equivalent CO2, GHGs with origin in fertilization, energy and straw have a lower percentage. N2O and CH4 are related to livestock waste and its management. Meanwhile, CO2 is associated with the use of fossil fuels and the production of straw outside the farm for the manufacture of livestock beds. 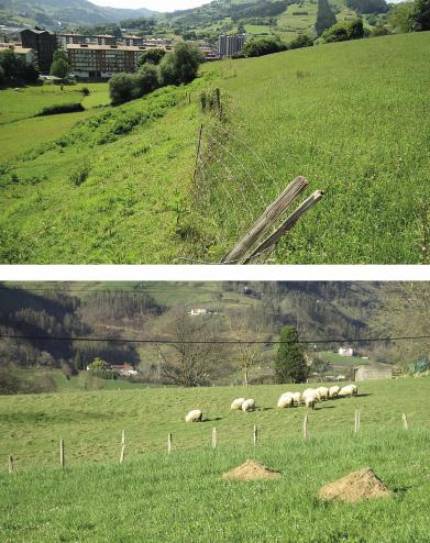 Figure . The use of pastures conditions beyond exploitation the maintenance of biodiversity and the sequestration of soil carbon. ED. : Amaia Alberdi.

In the breeding of lijas of origin, farms and mountain pastures are the basis of the livestock diet. Pasture resources, compared to current feed and fodder, are more difficult to digest for livestock; the microbial community has a greater activity in pastures, so the BAV spilled by reflection is greater in pastures, in the area of feed and fodder [8]. However, the absence of foreign food causes no environmental impacts associated with its production. Moreover, grazing can bring environmental benefits (Figure 6).

Regarding the maintenance of the biodiversity of grasslands, according to the measurements made in the fields managed in the farms of the Cantabrian valley, the average abundance of species, representative of diversity, is around 50; at the level of hamlet, around 60. It is observed that the estimate announced by statistical models is 70. It should also be noted that the greatest plant diversity has been observed in grasslands [10].

The tendency to increase milk production, however, entails the abandonment of seminatural pastures and the use of more digestible feed and fodder (Figure 7). Less reflection on the digestion of these foods, with the consequent reduction of CH4 emissions. On the contrary, the amount of GHG discharged is reduced to a displacement, since it is removed from reflection and incorporated into the production of feed and fodder, from being a biogenic gas to being an anthropogenic gas [11]. In addition, the maintenance of the cattle in the apriscos does not reflect any environmental benefits.

Figure . Feeding of latxas herds in the pastures and apriscos of the house. ED. : Amaia Alberdi.

As a result, are extensive latxas grazing and climate change friends or enemies? Blind to dairy production, what would replace the mosaic of farms and pastures? Perhaps a cement infrastructure with planes that eject twenty sheep cheeses on every normal trip.