In April it was successfully held at the Faculty of Medicine of Valladolid. Virological Board. Among the virologists were experts from both Europe and the United States, who exposed the resources they use, despite their highly specialized level. 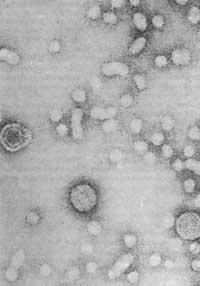 During the rest of the assembly, the participants enjoyed an interesting scientific exhibition organized by companies such as pharmaceutical or laboratory or diagnostic multinationals. At these stands we had the time to see the most suitable antiviral pharmaceutical equipment, techniques and products currently.

The Assembly lasted four days and, in general, there were two types of activities: conferences (in which there was simultaneous translation in English) and communications (held in horadillas, when reading any addressed questions and comments to the researchers, being an informal table).

The meeting began on April 17, M.G. Conference by Rossmann (US biologists) on the structure of viruses. He demonstrated the three-dimensional structure of Pikornabirus. Without entering the technical depths, we will only refer to the instrument (or toy, as he said) used by this scientist. This apparatus is an accelerator and bombarding the virus by subatomic fractions can be seen its crystallized structure. In the US there are only three and in Europe there are two or three, including the one being built on the border between France and Switzerland. Without a doubt, great advances can be made with this tool.

The next day, on the 18th, in the morning session, the mechanisms of viral replication were analyzed. In this first international symposium we master genetics. American, Dutch and Spanish experts demonstrated how their genetic information is repeated in some different viruses (bacteriophage Ø 29, SV 40,, and adenovirus) and what factors influence. To say that the scientific level was very high would be to stay short, since, apart from a few specialized genetics researchers, more than half of the public only detected some general ideas.

Before eating (in the Faculty itself, since we had to walk without losing a minute) we had the opportunity to see and comment on the communications on the walls of the third. We saw as paper the research carried out by the virologists, mainly Spanish, among which the Madrileños stand out. Then, in an hour-long session, too short, a round table was held which asked questions, comments and an interesting exchange of views among virologists.

The communications were carried out in three classrooms, analyzing three different areas: first the structure, molecular biology and chemotherapy, second the clinical virology and finally the plant viruses. Molecular biology highlights studies on the biological behavior of viruses that cause the African swine epidemic, polio, flu and AIDS. For example, little can be done against the flu. And if we prepare this year's virus vaccine, it will be available, but the mutations are very fast and we will meet another new virus for the following year or months.

In the afternoon session we could choose two round tables: the evolution of the viral genome on the one hand and the strategies of serologic diagnosis in viral infections on the other. The choice of the latter was more attractive and according to the conversations with other researchers I felt correct. Specific Immunoglobulin M antibodies were used to diagnose viral infections in the last two decades. At present, the methods performed in solid phase, especially the immunoenzymatic ones, have been a great advance to be able to make a light diagnosis and without a high cost of instrumentation.

Antibodies and viruses can now be detected in blood or plasma. It is also possible to detect it in other fluids, such as saliva, widely used in younger children to diagnose rubella, measles, and postnatal parotiditis. On the other hand, nasopharyngeal secretions are collected in viral respiratory infections. To diagnose possible viral infections in the central nervous system, the cerebrospinal fluid is studied.

The next two speakers talked about hepatitis. As is known, hepatitis spreads easily, much less than scary AIDS. A huge fact was mentioned: There are 200 million hepatitis in the world, especially in poor countries. We currently have five types of hepatitis: A, B, D and before not A or B, divided today into groups C and E.

For the diagnosis of hepatitis we use antibodies (especially monoclonal antibodies) that let us know if the disease has become chronic and if the person at that time is symptomatic or asymptomatic. According to the study carried out by the Hospital 12 de Octubre, it is possible to know if the patients are going to be chronic or will form.

We have kits for the diagnosis of hepatitis C, which thanks to reagents and small containers, can be diagnosed without complex tools. CV (Hepatitis C Virus) has been well studied and it is clear that hemophiliacs, drug addicts and hemodialysis are risk groups. Mother-to-fetal transmission has been analyzed very little in the case of HCV.

On Thursday 19, the 2nd International Symposium was held in the morning session. Really interesting topic: advances in antiviral therapy. As is known, antibiotics kill bacteria, but have no effect on viruses. We have antiviral agents to eliminate the viruses and the table below shows the most effective.

Antiviral agents have been designed from different perspectives: chemotherapy, molecular biology, etc. To this end, they use advanced Chinese technology, such as computer-assisted drug design, crystallization of the reverse transcriptase of the HIV virus in space (experiments performed on the space launcher), etc.

The future of antiviral research will take place in five chapters, K.L. by Wellcome Laboratories, Great Britain. In Powell. These five sections are: 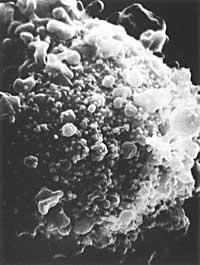 On Thursday afternoon we had two options: Plant viruses (Potyvirus biology) on the one hand and in light diagnosis Advances in Virology. Once again I chose the second round table and in the light diagnosis we can cite the following techniques: Although electron microscopy is a classic method—in 1930 a virus was seen causing smallpox—electron microscopy is now very useful when used in combination with other modern techniques. Other techniques are immunochemistry and ITE. National Center for Cell Biology and Retrovirus. The technique developed at the Carlos III Institute is a great step forward. They used colloidal gold to join the antibody.

Since the latter is associated with the HIV antigen, we will clarify whether there is a virus or not. In addition to using scanning electron microscopy to perfectly visualize the morphology of the virus, with a new technique, the retrobarredecided electrons, allow to measure the molecular weight or density of the viral particle. It should be noted that the team of the Carlos III institute, located in Majadahonda, is one of the best in the State, although it is not behind the Center of Molecular Biology (CSIC-UAM) of Cantoblanco.

On the other hand, we have Shell-vial techniques and the hospital can give clinical results in 24 hours. Without going into the detail of this method, besides being very simple, we will say that it is more sensitive than conventional methods and that for the case of CMV (cytomegalovirus) results are obtained in 18 hours.

For the diagnosis of respiratory infections viruses, the joint use of influenza such as ELISA (Enzyme Linked Immunoassay Analysis) and immunotrapping allows results in 48 hours.

On Friday 20 in the morning session new viruses such as herpes viro-6 (HHV-6), human parvovirus (B-19 and viroids (small nucleic acid chains without any protein box) were cited.

In the afternoon we had two possibilities: exotic virosis in animal pathology and AIDS. No need to say which option was chosen. Surely AIDS is the disease that has aroused the most fear and interest in people in this decade. So, I think it deserves a few words at least. The cause of the disease is HIV (Human Immunodeficiency Virus) in Basque HIV (Human Immunodeficiency Virus). Although there are some seriotypes (race), the HIV-1 is the most widespread.

The brightest star of the Virological Meeting was HIV. The fact that the round table held in this regard was not held in the amphitheater and that as in the international symposiums was held in the Assembly Hall, reflects significantly the importance it had and the interest it aroused. Chairman of the Scientific Committee, R. After the brief introduction of Najera, there were five lectures of twenty minutes. These are:

The highlights of these talks are, in short, the following:

The Virological Board closed with an elegant dinner at the casino in Castilla y León. The comments among the virologists were positive, both organizational and scientific. The third Assembly will take place in 1992. In Barcelona? 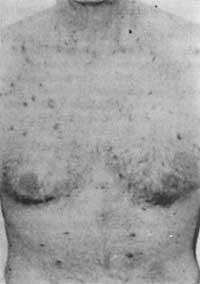