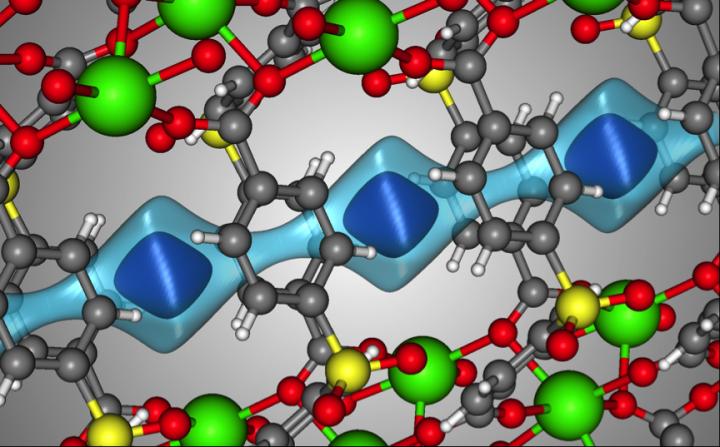 Structure of the material called SBMOF-1. Radioactive gases are trapped in the pores of the structure, separated from each other. Ed. Berend Smit/EPFL/University of California.

They have developed a material for the effective, safe and economical capture of radioactive gases released during the processing of waste from nuclear power plants. This is a project carried out in collaboration with researchers from the Polytechnic School of Lausanne and the University of California and published in the journal Nature Communications.

It has been considered an important step since the technology used so far to capture the gases released in recycling of nuclear fuel needed very low temperatures, so it is very expensive. In addition, there was a risk of causing explosions. However, thanks to the material they have developed, the process has been very much covered and is safe and efficient.

To obtain this material, 125,000 structures have been tested using computer models. They did not have the challenge of being able to separate the gases that come out.In fact, among the most important and dangerous of these gases are xenon and crypton, which should be collected separately for commercial use. On the other hand, the life of xenon is much shorter than that of the crypt (one month over a year).

In the end they have obtained the material they were looking for. It has been called SBMOF-1 and is similar to materials used to absorb other contaminants such as carbon dioxide. MOF are porous materials that capture gases between the pores. Well, the structure of SBMOF-1 is adequate for the capture of xenon and crypton separately at room temperature, which, according to the researchers, has allowed to reduce the process of reuse of uranium and plutonium in nuclear power plants and make it safe.