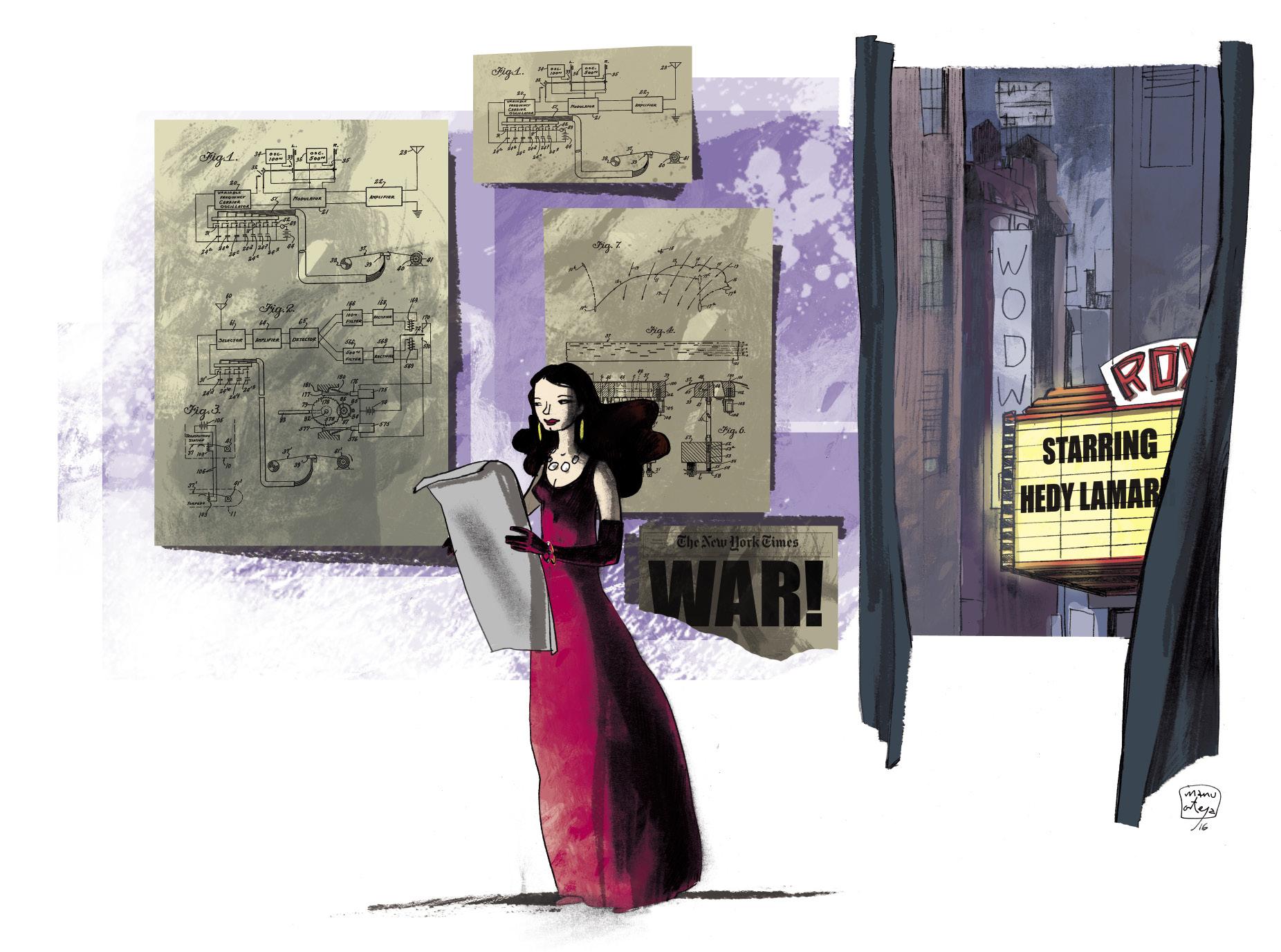 When she arrived in Hollywood, Hady Lamarr was promoted as the “most beautiful woman in the world” and rolled and rolled. In times when it was not rolled, he devoted himself fully to his house office, between paper and models. I wanted to create a new wireless communications system. Their goal was to help the allies confront the Nazis. He hated them. Unfortunately I knew them well.

Hedy Lamarr was an Austrian, born in Vienna in 1914, in a family of Jewish origin. Hedwig Eva was then Maria Kiesler. They soon realized that he had extraordinary intelligence. He began to study engineering but abandoned them because he dreamed of being an actor.

With his fifth film he was famous in 1932. Ekstase raised powders, especially by a scene: Close-up of Hedwig's face depicting an orgasm. It was considered scandalous and banned in many places.

Hedwig was up to 19 years old and his father tried to get directly into the road. He forced to marry Fritz Mandl. Mandl owned an arms factory, one of the richest men in Austria, jealous and authoritarian. He banned him from making movies and was completely controlled. He lacked luxury, but it was a golden prison for Hedwig. He took advantage of the time to delve into engineering studies.

Her husband forced her to be at her side in all social events, including work meetings. And at those meetings he learned a lot about cutting-edge military technology. At the magnificent feasts that her husband organized in his house he met Mussolini and Hitler. The latter was a very nice man, as Hedwig recognized, although he could not bear it. He could not bear all that world. And he decided to flee.

He took all the jewels and escaped to Paris without any other luggage with clothes he wore. During the days she chased her husband, but managed to reach London. There he learns that Metro boss Goldwyn Mayer was looking for actor Louis Mayer and presents himself. But he did not give him good treatment. Hedwig later discovered that Mayer was returning to the United States and embarked on the same boat. When he arrived in the United States he had a good contract agreed. In return, Mayer asked him to change his name so that he would not join Ekstas. He was elected Hedy Lamarr.

With her beauty and glamour, she soon became a Hollywood star. “Any woman can have glamour,” he said, “just be still and pretend nonsense.” Despite being ingenious in appearances, he had little for the tunte. And in free time he began to make inventions. Among other things, he invented a better traffic light and a pill to make soft drinks at home, without great success.

Meanwhile, the Nazis were gaining strength in Europe. And when the ships loaded with civilians began to attack, Lamar decided to do something. He offered to work on the National Council of Inventors, but was told that it was better than his fame and beauty out to sell war bonds.

So it was, but it did not stop. On his own, he decided to improve radio communications. In addition to being an important means of radio communication, weapons remote control systems were being developed. However, radio communication had a problem: it was not safe. It was relatively easy to detect the location of the transmitter or cause interference.

Lamar had a great idea to solve it: split the messages into small parts and send them alternating the different frequencies. To rotate the frequencies an irregular model would be used whose code could only decrypt the message. The emitters and receivers would be synchronized and, according to this code, would jump simultaneously from one frequency to another.

Lamar had no problems developing the transmitter and receiver, but he did not know how to synchronize both. Then, hopefully, at a dinner he met George Antheil, who wrote music for movies. They were fascinated. It was not such smart conversations with anyone.

Years earlier, the Ballet Mécanique, premiered by Antheil in Paris, was a scandalous show. It was a special orchestra: two pianos, 16 synchronized pianolas, three xylophones, seven electric bells, three airplane propellers and a siren. The public, angry with anger, ended up throwing seats. A year he tried in New York, but there he also failed. From then on he decided to dedicate himself to writing soundtracks.

But the truth is that Antheil was able to synchronize 16 pianolas. And that was precisely what Lamar's invention needed. They worked hard together for several months and in June 1941 they applied to patent their “Secret Communication System”.

With the technology of the time it was difficult to carry out that invention. However, in 1957, American engineers developed the Lamarren and Antheil system. And three years after the patent's extinction the government began to use it. Today, many of the wireless communications that are used in both the military and civil spheres, such as wifi and bluetooth, are still based on this system.

“If used worldwide, why haven’t I received any letters?” Lamar said. While performing at Metro Goldwin Mayer, he hid that facet of inventor in the conviction that he could harm his divine image. No one related his name to any invention.

In total 30 films participated. He married six times and was divided six times. “I have to stop marrying men who feel less than me,” he said.

The last few years were not sweet. He took too many pills and, blinded by cosmetic surgery, deformed his face. She also suffered from kleptomania problems, trapped in small robberies. He finally locked himself in the Miami house.

Three years before his death, in 1997, he was awarded the Pioner Award. When they informed him, he answered correctly: “It was time.”