For its beauty, the interest of glaciers and its endangered fauna, UNESCO declared it a World Heritage Site in 1981. 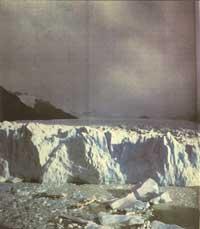 View of the front of Perito Moreno from the peninsula of Magallanes.

In the heart of Argentinian Patagonia, in the province of Santa Cruz, is one of the most spectacular natural reserves in the world: Glaciers National Park. A territory of 600,000 hectares formed by volcanoes, meadows, coniferous forests and glaciers.

In this territory the Andesa mountain range is covered by a permanent layer of snow. Known as the ice field, it has a surface shape of 14,300 km 2, which extends to 350 km from North to South. From this ice field 47 glaciers descend and 13 of them correspond to the Atlantic Sea: Marconi, Viedma, Mayano, Upsala, Agassiz, Bolado, Onelli, Peineta, Spegazzini, Mayo, Ameghino, Perito Moreno and Frías.

The most famous and spectacular glacier in the National Park is the Perito Moreno, which extends over the southern arm of Lake Argentino. This glacier is 35 km long, 4 km wide and 60 m high compared to the water level of the lake.

His name was Francisco P, Argentine traveller and researcher. It comes from Moreno, who discovered Lake Argentino, which first crossed this territory in 1876.

The Perito Moreno glacier is located opposite the peninsula of Magallanes, separated by the channel of the Tempanos. In turn, the peninsula of Magallanes is surrounded by arms of the north and south ( Arm Rico) of Lake Argentino, which reach the feet of Perito Moreno. The head of the glacier descends from the Andes mountain range through a 195 km 2 valley like an ice sheet.

Following the continuous advance of the glacier, in 1947 the natural drainage of the Brazo Rico arm was cut for the first time and crossed the channel of the Tempanos to peninsular lands of Magallanes. As a result of this phenomenon, the water level of the Arm Rico increased considerably, plunging into the lake newly created by the valley and construction.

With the use of explosives to break this natural ice spade many attempts were made, but nothing was achieved. Finally, the bar was cut thanks to the leaks generated by the pressure of the waters of Brazo Rico.

This extraordinary spectacle of nature is repeated today every three years (approximately). When this happens, the lake's water level rises 19 meters in this area.

The fracture of the glacier is an unforgettable spectacle. When the Government of the province of Santa Cruz announces the breakup of Perito Moreno, visitors from all over the world come to the National Park to witness this spectacular natural phenomenon of 70-75 hours, standing in front of the Tempanos channel. People from every corner come to see how the potential energy accumulated by nature transforms into kinetic energy.

After the break the lake waters calm down and recover slowly.

It has often been said that the glacier Perito Moreno is the only glacier in the world that advances. This is not true, because there are similar cases in Alaska, Greenland or Himalaya, but the approach to Perito Moreno is much easier than these, so it is better known. Perito Moreno can look very closely, and even closely follow his break without any danger.

After several studies it has been possible to verify that the glacier Perito Moreno advances 100 m a year. If in 1900 the front of the glacier was one km from the peninsula of Magellan, in 1908 the distance was 300 m, in 1914 of 100 m and in 1917 formed the first ice dam that reached the coast.

Because the Earth's climate is more temperate, today most glaciers (except Perito Moreno and others) are suffering a considerable retreat and in danger of extinction. The remaining glaciers are maintained by snow precipitation. These precipitations of snow are ejected through their weight and become ice. However, rainfall is not enough to regenerate large masses of ice, so they go back. 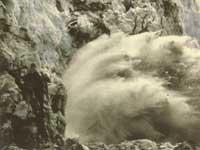 Glacier ice falls into the water.

The glacier is an impressive light and sound show. It is spectacular to hear the color changes (blue, green, reddish) that suffer throughout the day and the noise produced by the blocks that fall into the water from several meters high.

Throughout the year, as the glacier is in continuous motion and stands on the irregular scarp, as the terrain adapts, the ice cracks and from its forehead large masses of ice are released that fall to the lake waters.

Glaciers are the most attractive spectacle of the National Park. These ice masses or rivers of ice form the continental ice of Patagonia. Its approximate surface is 22,000 km 2. It is, therefore, the largest glacial zone in the southern hemisphere (except Antarctica), far superior to the glacial zone of the Southern Islands of New Zealand (Orcadas, Georgias, etc.). ).

These glaciers that can be seen in Chile and Argentina, were born millions of years ago in the Quaternary. At that time the ice covered almost all of Patagonia. The ice receded and the sea or water of the melting season invaded the glacial valleys forming deep and narrow lakes. The most important lakes created then would be those of San Martín, Viedma and Argentino.

Although we do not know the causes of glaciers very well, it is believed that they are due to changes in the climate, atmosphere, Earth's orbit and Earth's axis of rotation. This period was very important for human creation. At that time the prehominid appeared on Earth and is believed to come from Homo Sapiens.

Glaciers are rivers of solid water. They become moving masses and move faster or more slowly depending on the lower slope and ice volume. As is known, in the upper basins or coolers are formed as a result of the snow accumulated throughout the year. Like rivers, glaciers also have a basin. This collects water from the high areas and channels it down. In mountainous areas the most common is the so-called simple or alpine valley, but it can also be composed. The latter consists of two simple glaciers with their respective basins.

Perito Moreno from another point of view.

The glaciers are the other amazing spectacle of the National Park, the lakes of the province of Santa Cruz. Lake Argentino, 1550 km 2, is considered the largest lake in Patagonia and is one of the most beautiful lakes in the world. It is the most Australian lake in the Pleistocene glacier. Lake Viedma covers 100,000 hectares and the glaciers of Viedma and Moyano descend to this lake.

Due to the rain that falls almost continuously, in the vicinity of the lakes you can find almost completely green valleys. The vegetation is abundant and abundant. The landscape of the lakes is decorated by cypress, regulator, lobe, fern and moss.

The fauna of the park is also abundant and rich. In southern summer lakes and lagoons numerous birds are approaching: ducks, batons, geese, black kestrel, flamingos, vasollos, etc. In addition to these species, there is an elegant flying condor bird. The largest American reserve of this species is in this territory.

The landscape of the National Park is spectacular, as the beauty of the glaciers, the crystal clear waters of the lakes, the mountains covered with permanent snow, the forests, the vegetation and the fauna that congregate offer an unforgettable spectacle. 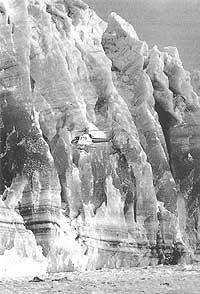