The Nobel Foundation has announced that the Japanese Takaaki Kajita and Arthur B. Canadian McDonald will receive the 2015 Nobel Prize in Physics. The teams of both researchers, each for their part, showed that neutrinos are transformed from one type to another and therefore have mass.

The neutrino trillions traverse us a second. They move almost at the speed of light and hardly interact with matter. They occur in different spatial processes, but also in our atmosphere and on Earth itself, such as nuclear power plants, and within us, by disintegrating isotopes. After photons, they are the second most abundant particles in the universe.

Despite their abundance, neutrinos have always been difficult to investigate. In fact, by not interacting with matter, they are very difficult to detect. By the time Wolfang Paul announced them in 1930, he had that concern: “I have done something terrible, I have proposed a particle that cannot be detected.”

Pauli did not succeed in this, which was detected a quarter of a century later. But little was known about fleeting neutrinos until at the end of the century more sophisticated detectors were made. The Karolinska Institute awarded this year the discoveries made in two of these detectors.

In 1996 the Super-Kamkande, a 1,000-metre deep underground giant detector, was launched in Japan. It had the ability to detect neutrinos that occur when cosmic rays collide with particles in the Earth's atmosphere. The Takaaki Kajita team detected about 5,000 neutrinos during the first two years. It was much more than achieved, but less than the theoretical calculations indicated.

Then they realized something strange. Theoretically, it had to reach the same number of neutrinos on both sides of the detector, some coming directly from the atmosphere and others crossing the entire planet. But they detected less those who crossed the planet. From there it was deduced that the neutrinos that made the longest path were transformed and therefore could not detect.

There are three types of neutrinos, electron neutrinos, muon neutrinos and stick neutrinos. Those generated in the atmosphere are muon neutrinos detected in the Super-Truck. Kajita proposed in 1998 that some of the neutral hills forming in the atmosphere were transformed into late-neutrinos along the way. And this meant another important consequence: if they changed, they must have mass necessarily. Thus, although it was previously thought otherwise, Kajita put on the table the first test that would suggest they had dough.

Shortly after confirmed Arthur B. MacDonald groups at the Subdury Neutrino Observatory of Canada. This detector, located 2,000 meters deep, detects neutrinos from the Sun. But it allows two different measurements: only electron neutrinos, or all types of neutrinos at once, without knowing how much of each.

Only electron neutrinos are produced in the sun. But they saw other neutrinos coming. Thus, it was concluded that some of those coming out of the sun in the form of neutrino electrons became muon-neutrino and tau-neutrino.

The Nobel Foundation recognizes that both results revolutionized existing knowledge until then. In fact, the Standard Physics Model itself was also questioned for the first time, as this model needs neutrons without mass. It became clear that the Standard Model is not enough to fully explain the functioning of the universe.

So if neutrinos have mass, but very small. Although it has not yet been measured, physicists estimate that it is one million times lower than electrons. However, there is as much neutrino as all the stars that can be seen in the universe. 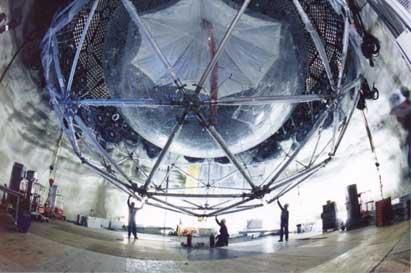