Recent eucalyptus plantations on the coast have raised concerns among many experts. In his opinion, they have a strong impact on the forest ecosystems of the Basque Country, with worrying changes in local biodiversity, hydrodynamics of rivers and streams, fauna and vegetation. But the debate is coming. Intsinis pine disease has already started and this time it has been caused by eucalyptus plantations.

The forest model is on the table and there are many questions to answer: What do we call forest and what not? What makes you healthy and vulnerable? What ecosystem functions should the forest perform? As a starting point, we asked two long-distance experts, what is the situation of the forests of Euskal Herria? 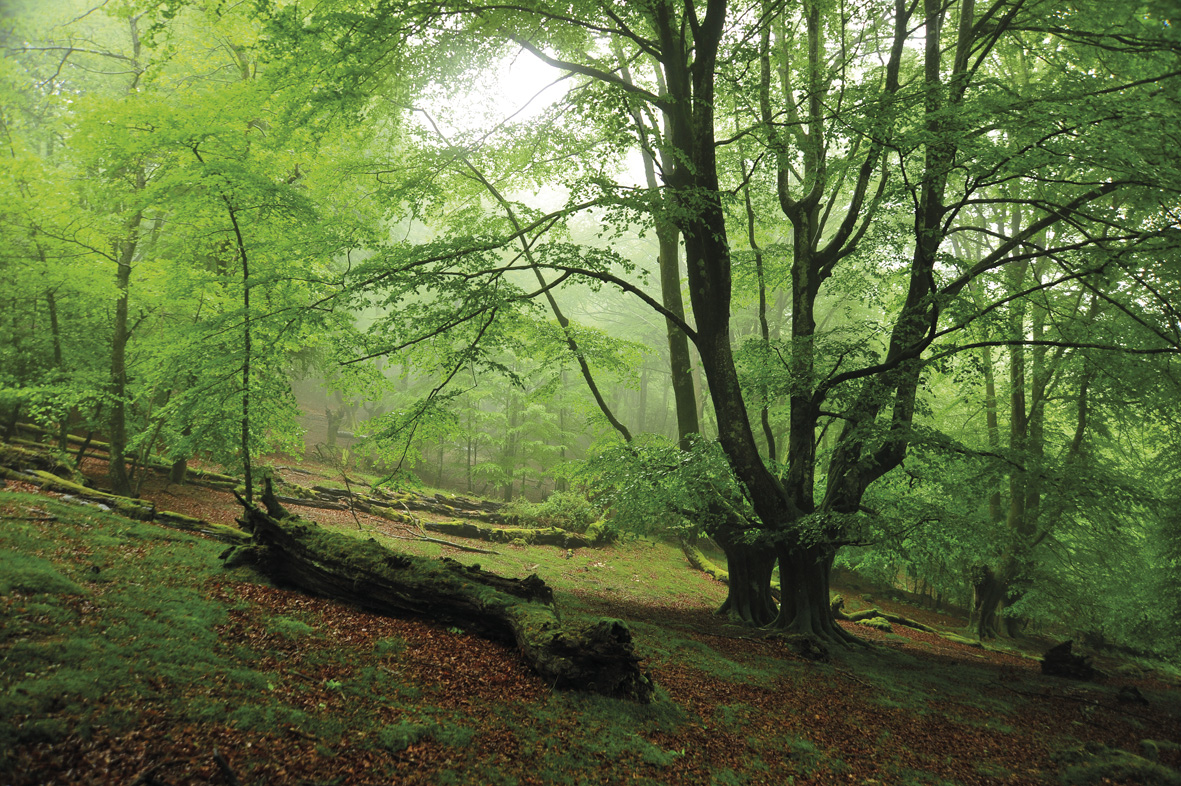 “Peace is the secret of forests of high natural value”

I have been asked about the situation of the forests of Euskal Herria. Simple question, difficult answer. Difficult, because it is not so simple what the forest is. For some, all wooded spaces are forests; for others, exotic species plantations are not. Similarly, some focus on the conservation status of forests and others on the wood they produce. It is not easy to respond to everyone.

To begin with, we have many groves. More than half of the ACBC is covered with trees, Navarre does not follow it and in Iparralde, although to a lesser extent, there are extensive forests. However, we have very different groves: In Alava 80% are native species, in Bizkaia 24%. In the latter case, the proportion of indigenous forests is very similar (25% and 24% respectively) in public and private land, indicating a management similar to that of private owners and administrations.

Regarding exotic species plantations, some have stressed that most of them have sustainability certification, with strict management plans. They have been in genetic improvement for decades. They are exemplary, the envy of Europeans, especially thanks to the radiata pine. But this species has been above the disease: pine tremor for a long time, fusarium in the 2000s, brown strap after... until the species has failed. Our performances have not influenced this decline. No monocultures or intensive farms. Everything is due to bad weather. European envy in the envy of the Galician eucalyptus. Plantations, therefore, in a worrying situation.

Native forests are also exploited. Their situation is difficult to generalize. Arbaila is not the same as Urbasa, Izki or Aralar. There are leaks of rigorous but sustainable exploitation, old barren forests that have barely been exploited in recent years, as well as ponds that are recovering from too harsh exploitation. In all of them, besides the use of wood, ecosystem services can have a great importance: water, leisure, hunting, fungi and carbon accumulation. Ask us in Añarbe, Bertiz, Roncal or Ultzama.

And what is the state of conservation? This was asked from Brussels when the Natura 2000 network was established. In fact, some of
the habitats protected by this network are forests. The conservation status is due to the extent of these habitats, their natural structure and functioning and the conservation status of typical species. From these variables it is observed that in the ACBC all types of forests of interest present a poor state of conservation. All. Sometimes, for example, in beech trees, despite having extensive forests, due to its poor structure and functioning. Other times, for example, in the oak groves, because there are few left.

Well, in our forests there is much to improve. In the face of exploitation, I am convinced that intensification is not the way forward, but is limited to increasing the human footprint that we already have too large. Not from pine to eucalyptus, but longer cycle species. For ecosystem and conservation services, they can be called protection forests, recover scarce types of forests, increase the natural value of forests, respecting old trees, leaving dead wood in the forest, increasing diversity within the forest. Because we have forests of great natural value such as Aztaparreta, Bertiz or Artikutza. What is your secret? We have left them alone in recent decades. That is what the forest has in our region, which with the simple deposition accumulates more and more natural heritage. It is time to make decisions in forest management. Not for us, for generations to come.

“The forestry sector has already become a source of conflict”

The natural environment of Euskal Herria is completely altered, since human activity over the centuries has reached every corner of our country. Before entering the Anthropocene, human traces could be seen everywhere throughout the Basque Country.

In almost all of our territory, our own terrestrial ecosystems are forests, that is, when human activities are abandoned in rural areas, they occur gradually, hundreds of years. In the ACBC, however, there has been little evidence of such processes. In Gipuzkoa and Bizkaia we only have small spots, most of them beech, separated from each other and in poor ecological condition (being the size and effect island the greatest threat to local biodiversity). The north of Álava and Navarra, on both sides of the border, are in a better position, especially the oak groves, which occupy larger areas. They are not natural, they are exploited, but more sustainably, favoring natural development. To the south, in the plain, on the banks of the river and between the fields of cultivation are preserved small forest spots.

This reality totally conditions our vision of the Basque Country of forests (ignorance in general). How do we understand forests? What do we call forest? Forests are not the same as tree plantations, although both are wooded.

Thousands of bare hectares in sight

Under the threat of climate change, with the aim of decarbonization, the ability of forests to absorb CO2 from the atmosphere is filling hours and leaves in the media. The need to recover forests, or to invest the profits of businesses in forests, has become a motto we hear more often than ever. At the same time, the pandemic caused by covid-19 has sent the population as a balance to the rural area and has had a unique opportunity to reflect on its landscape. The Basques have encountered the crisis caused by pine insignis: thousands of hectares of forest lands bare to matarrasa, many of them replaced by eucalyptus plantations. This has led to the socialization of the debate on a forest model that has not been addressed for years.

But the debate, rather than scientific foundations, is economic and political. As already mentioned, in the ACBC, without scarcely having forests, the tree masses are everywhere, since the almost clear rural environment is covered by the monoculture of exotic species destined to the production of wood. We have become accustomed to calling pine and eucalyptus plantations forest. The confusion is being so much (caused to the effect) that, at present, due to the economic losses caused by various pests, wood activity is being denied, since the administration presents abandoned plantations as “abandoned forests”. That is, we have come to call “abandonment” to our own natural processes.

This conflict is not only terminological, but also conceptual. Although soil involvement by an intensive forestry model based on monoculture is evident, studies such as soil losses are hardly shown. On the other hand, the intensively exploited tree plantations, although until the short shift, can offer the possibility of increasing biodiversity or accumulating atmospheric CO2 in wood, in a few years will return to the atmosphere the accumulated, ending biodiversity.

That is why it is time to differentiate forests from tree plantations, and let's not say, to consider the forms of exploitation of plantations in their environmental impact. It is time to value the benefits of indigenous developed forests, so that biodiversity reaches the center. It is time to talk about land management and public money to rethink forest policy objectives.