Thanks to new technologies and new attitudes, the field of recycling is emerging in the developed countries of the world. Progress has been made, however, individual. So far, each country has taken its steps at the time and in the way it has decided, while in the future it seems that it wants to give a more global response to recycling that we all need. This philosophy includes the idea of the European Recycling Centre.

The European Recycling Forum is a discussion forum on initiatives that can be promoted to improve recycling efficiency. All this is fully integrated in the European Union and especially in small and medium-sized enterprises. The Forum brings together various institutions from all Member States of the European Union, including the Basque Country. The Gaiker technology center is one of them, represented by Edorta Larrauri, responsible for the Recycling of Plastic Materials area of the center of Zamudio.

According to Edorta Larrauri, of the January meeting, in addition to talking about the objectives of the Forum, four working groups with their respective tasks emerged. "Groups A, B, C, and D were formed. The main objective of group A is to make a diagnosis of the economic, environmental and social situation of the different recycling sectors. It will also be responsible for the statistical theme of each sector. Group B is responsible for developing markets and material standards. In group C we met those who are working on recycling innovation and research. And Group D is analyzing the regulatory and legislative aspects of recycling. The Basque delegation from Brussels also participates in this group D".

The Gaiker technology centre is part of the Innovation and Research Group, but is also part of the Market and Standard Materials Development Group, with one representative in each group. As is known, he is a member of Gaiker CITMA, a virtual center where the environmental activities of the technological centers of the Basque Country are collected. However, Gaiker is not the only representative of Euskal Herria at the Forum, since Orgalime and Ihobe, among others, are there.

"In the Innovation and Research group, which follows Edorta Larrauri, we have focused the debate on three issues. On the one hand, we are discussing priorities for recycling research and development in Europe; on the other hand, we have taken steps to analyze how to better transfer results to industry in research and development projects; and finally, we are talking about the suitability of the creation of the European Recycling Center."

According to what Edorta says, to define recycling priorities have been discussed the different perspectives that exist in the group itself. They have all met and prepared a single report. As mentioned in the draft report, what in some sectors is still demanding, which is still a problem, in others is already solved. "There is a clear lack of information between the different sectors and the European Recycling Centre could address these kinds of problems. It would be suitable for this. Technologies already known in the recycling industry could also be used in the treatment of other products." Like information between different sectors, the draft makes special reference to differentiation in requirements. "When it comes to recycling, separating well is very important. The better it separates, the better quality in separation, the closer we can be to the clean product, so the demand for separation technologies is clear, but always taking into account the cost of that differentiation." The third point cited in the draft prepared by the group of people working on recycling innovation and research highlights the need for eco-design. "They are not especially recycling technologies, but we need recycling designs and technologies, that is, designed to reduce waste generation."

In order to improve the transfer of technology to small and medium-sized enterprises, different actions have been discussed, but less than desired. "The truth is that the contributions in this area have not been many, so for now we have neither drafts nor reports." In any case, Edorta Larrauri hoped to have more contributions in this area for the meeting they had at the end of September.

As progress has been made in the first two points, the theme of the European Recycling Centre is in a moment of intense debate, so it cannot yet be said whether the idea will become a first project and then a reality. "In our group we are discussing whether the creation of this center is adequate or not and what figure should be adopted if believed. Although it may be too early to say something, it seems quite clear that if you create it should have the appearance of virtual center, based on computer tools, internet, etc. At least initially, a network of information exchange on recycling technologies would be structured, so that small and medium-sized enterprises, and industry in general, can access existing information in Europe on recycling in a convenient, fast and simple way." Given that in Europe there are numerous centers that work with recycling technologies and that there are numerous initiatives in the recycling materials market, with this type of services any company could find detailed and direct information on the huge field of recycling. That would be the core of the potential center, offering companies that want to go the recycling path the possibility of receiving all the information with a single door. However, as already mentioned, for the moment it is only an idea, since it is in the phase of debate. "There are different perspectives, what figure the potential center should have, what kind of service it should offer, what solution it should give to the language problem, who and how it would have to pay the cost of service, etc."

It can be thought, among other things, that for the technology center Gaiker, which works in recycling, although not essential, it is of great interest to be from the beginning in the European Recycling Forum. The participation in this meeting allows this technological center of Zamudio to be at the top of the recycling career. "With participation in the forum, we believe we are in a very suitable place. Working on identifying priorities for research and development can be an important tool for us to see where Gaiker's recycling technology lines should focus. For us, and for the technological centers that form CITMA, it is an interesting observation window. So we see our participation in the Recycling Forum. At the Forum we want to be in the first line of recycling in Europe, from where the technological demand of the recycling industry will be transferred to the European Commission.

In addition, we would like to have the presence of a possible Recycling Center for which we are working. But don't forget that we're talking about something that's just an idea."

If a European Recycling Centre was created, it is clear that it would benefit the Gaiker technology centre, CITMA participants and those currently participating in the Forum. It could also be thought that it would be good for the rest of the people working in the field of recycling. Could we reach society, that is, pedestrians something good of this initiative? "In the first place, everything that is being done would be known, so duplication situations would be avoided when facing problems. If good information is available about what others do, there is no risk of recurrence. It will also support small and medium-sized businesses, who will have greater security in choosing one or another technology. In fact, the recycling market is constantly changing, the legislation itself modifies it... and the fact that companies decide technologies is a serious and dangerous issue if selection is not done correctly. There the industry benefits and if the industry benefits also society". The possible center will be known before the end of the year, that is, soon you will know if a slight worsening occurs. 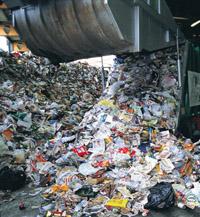