The oldest sapiens in Eurasia identified

After analyzing two skulls found in the same place in Greece, one sapiens of 210,000 years ago and another Neanderthal of 170,000, in a work published in the journal Nature. The first, the oldest sapiens discovered in Eurasia, would mean that modern man left Africa much earlier than was thought. However, research has raised considerable uncertainty among experts. 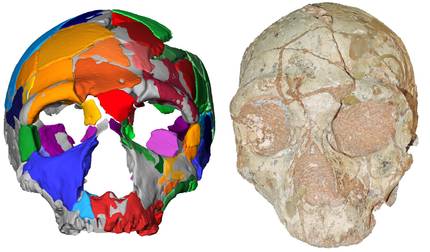 Both skulls were discovered in the late 1970s in the cave of Apidima. They were called Apidima 1 and Apidima 2. Apidima 2 was already identified as Neanderthal, while Apidimia 1, a smaller portion of the skull, was not identified. Now, the researchers have virtually reconstructed and analyzed the two skulls and, in addition to claiming that the fossil Apidima 2 has Neanderthal characteristics, have concluded that the Apidima 1 sapiens is because it has the back of the skull rounded as sapiens.

On the other hand, using a uranium dating technique, they have been able to verify that, although the fossils were found very close, they are of very different dates. The fossil Apidima 2 has calculated that it is 170,000 years old and Apidima 1, 210,000, 160,000 years older than the oldest sapiens that has been identified in Europe. Thus, these results suggest that modern man left Africa much earlier than expected, and researchers believe that it reinforces the hypothesis of multiple dispersions.

However, this study has generated doubts among experts. "It is very rare that two mediocre so close have such a different chronology," explains Joseba Ríos Garaizar, a researcher at the CENIEH Human Evolution Research Center. “If everything was fine, the consequences would be impressive. Modern men so early in Europe, together with Neanderthal..."

Asier Gómez Olivencia also does not see it clear: “Finding a human fossil is very difficult; and finding two skulls, one next to the other, that are of different chronology, and that also belong to two different species, not normal,” says the UPV paleoanthropologist. “In Atapuerca, in the Sima de los Huesos, Calavera 10 is pathological (has craniosynostosis), so the frontal is more vertical due to compensatory growth. Seeing only that front would have a great sapiens appearance, but we know it is not of this species."