“Communication technologies surprise and frighten me”

Esti Apellaniz answers the questions from the long distance watchtower. The truth is that at first he also showed his concern, if it would not be more appropriate to ask a young man. No, that the young researchers also had a place in the magazine, but that now and here we wanted to know their answers. Suspect that they would be interesting and correct. 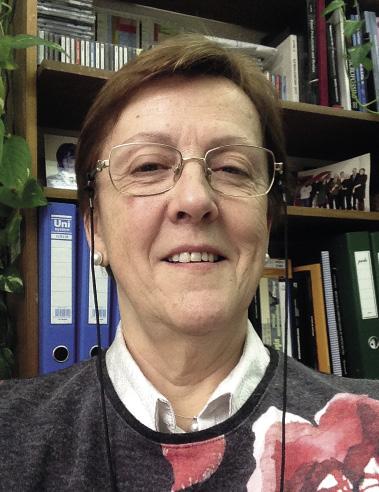 I find it difficult to give a single answer, because in recent decades the discoveries have radically changed our lives.

In the personal sphere, I would highlight the enormous progress that communication technologies have experienced (internet, telephony, wifi, etc. ). My older daughter lives in Helsinki, and talking to her and seeing me in real time amazes me every time we do. At the same time, I am afraid of the same thing, because I feel more than ever observing myself at all times.

In the field of geology, and despite its antiquity (XX. The theory of plate tectonics, from the mid-20th century, has fascinated me the most, since it has been a unifying theory of earth sciences, which explains in a unified and coherent way geophysical, geological, paleontological, paleoclimatic observations, etc.

In June of last year, University of Southampton researcher Juerg Matter and his collaborators published in the journal Science an article titled “Rapid carbon mineralization for permanent disposal of anthropocarbon genic dioxide emissions”, in which they proposed a way to confine CO 2 to basalt rocks. Within a project called CarbFix, the CO 2 released by an electrical installation in Iceland was stored in a basalt rock formation. Within two years, gas reacted with rock minerals forming carbonates. Therefore, this technique can lead to mitigation of the effects of climate change.

In any case, with the words of James Lovelock, “we cannot think that we can extract from the wind and the sun the energy necessary to maintain the current level of consumption.” A difficult future if we do not consider it.

Apellaniz Ingunza stibaliz
Estibaliz Apellaniz Ingunza (Bilbao, 1954) graduated in Geological Sciences from UPV in 1976. In 1998 he received a PhD in Geology from the UPV/EHU and since 2009 he has been director of the Department of Stratigraphy and Paleontology at the same university. During all these years he has worked in research and has published numerous scientific articles.