British scientists discover the first non-metallic driver. This conductor leads along two dimensions to the ambient temperature of the zero pit. This type of molecular metal can considerably lower the cost of the magnetic and electrical components of computers.

Molecular metals that have been prepared so far only carry electricity in one direction. The molecules of these materials accumulate in very well ordered rows. Each molecule has a weakly united electron system. When molecules accumulate, electrons overlap in the direction of stacking. This is the cause of the conductivity of the aforementioned molecules. This creates a structure similar to metals. The structural difference between metals and molecular metals is that in the latter the metal structure is only in one direction. 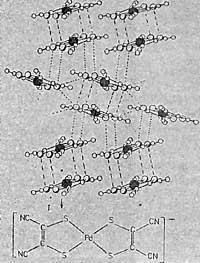 When these materials cool (between -170/-25°C) they lose their conductivity. The cause is the deterioration of the electronic structure due to instability and distortions in the crystalline network accumulated at low temperatures.

If there were additional electronic interactions between rows, two things would happen. First, the electronic structure of the material would extend to two dimensions. Secondly, the crystalline structure would be more resistant to distortions by low temperatures.

This is what has been achieved by a group of Welsh scientists led by Allan Underhill in the synthesis of an organometallic complex of palladium. The molecules of this complex accumulate in two directions. However, this material is transported at low temperature under high pressure (12,000 atm.) must be.

Low pressure causes small molecular reorganizations and energy holes are created that deteriorate the conductivity of the electronic structure. The high pressures discard these reorganizations.