strong>When the price of oil grew in 1973, there was a great boost to research into alternative energies, which has subsequently suffered great ups and downs. The Persian Gulf war has also affected the price of oil. It is therefore a good opportunity to see the solar, wind and geothermal energy projects in France.

The increase in the price of oil in 1973 and 1978 began numerous projects to use alternative energies. The Commission for the use of solar energy built in the Pyrenees the central Themis, with the aim of achieving a power of two megawatts. In five years (from 1978 to 1983) after spending 4,000 million pesetas, the plant did not reach its objectives and has become a laboratory.

The Alternative Energy Research Agency (AFME) this year has had a budget of 96 million pounds (formerly 10,000 million pesetas).

In France it can be said that plans for the energy use of the sun, wind and subsoil are excluded, but the situation is not the same in Germany, the United States and Japan. There the State grants aid of 16,000, 25,000 and 70,000 million pesetas respectively for the development of alternative energies. In France, however, at present the greatest aid is granted to save on the consumption of classical energies.

However, some companies are dedicated to the diffusion of alternative energies around the world.

The energy that the Sun emits to our planet is thousands of times greater than that consumed in the world. 100,000 terawatt x annual hours (terawatta = 1012 watts) approximately. Photovoltaic sensors are used to transform solar energy into electric energy. France is the largest producer in Europe, with two megawatts of power installed annually worldwide (5% of the total).

Production is in the hands of small businesses that export more than 95%. A few square meters of silicon sensors in the urban environment, needs of millions of inhabitants (water pumping, lighting, refrigerators, etc.) saturated in Angola, Nepal, India and other territories of all continents. In the French colonies too much is used of solar energy. Last year they consumed 1.2 million kWxh using photovoltaic sensors from 4,000 households.

It is the solar power plant of Kramer Junction in the Mojava desert, California. It has 650,000 parabolic mirrors to heat oil filled tubes. The oil is heated to 391 °C, so when evaporating the water the turbines are activated reaching a power of 30 megawatts.

Photowatt house, dedicated to the manufacture of polycrystalline silicon collectors, has developed in recent times a new system of cutting fine collector plates. Thanks to this, it uses less silicon than its competitors, approximately half. Keep in mind that silicon, when purified and shaped, is worth a hundred times more. The kilo of purified silicon costs about 30,000 pesetas.

You just have to see the surface of silicon plates for energy and not thickness. Therefore, manufacturers try to make the inserts as thin as possible. Photovoltaic plates with 0.4mm thick saw blades are currently obtained. In the house Photowatt, however, they use a steel thread of 0.170 mm, obtaining plates of 0.2 mm thick.

Photowatt installs its plates worldwide. In the Camargue of Provence, for example, the generator of 12 kWg works in the central located between marshes of La Palissade (kWg or peak kilowatt), the power that is obtained when the installation is maximum: 1 kW/m2). They also have their products mounted in Guadeloupe, Polynesia, Rwanda, Zinbabue, Pakistan, Niger, etc. One of the most interesting facilities will now be the Sahel of southern Sahara. In the next four years, 650 generators of 1 kWg will be installed to pump water, lighting and supply of refrigerators.

A few years ago a new system of manufacture of photovoltaic panels is being prepared. The plates are silicon, but not crystalline, but amorphous. It is an interesting system as there is no need for crystallization furnaces that spend a lot of energy. In addition, the silicon layer that is placed on the glass plate from the silane gas in the vacuum is two hundred times thinner.

But amorphous silicon has a disadvantage in performance. When it transforms solar energy into electric energy the yield is 6%, half of the polycrystalline silicon. This system, designed in the United States, is used when small power collectors are needed as small manual calculators.

It has a photovoltaic generator with panels of 16 square meters in the surroundings of Sagia (Niger). It has a maximum power of 1.4 kilowatts and pump every day 60 cubic meters of water.

The lower performance of amorphous silicon should not be an obstacle to its development. Although they are twice as large as crystalline silicon panels, the need for electrification usually occurs in remote isolated areas where there are no space problems. A house is currently being developed in France. It manufactures small power plates to supply lantern and camping lights, but also makes water pumping units in Third World territories.

On the other hand, the United States and Japan are running multi-megawatt photovoltaic power plants. Carrissa Plain from California has 8 megawatts installed. They occupy an area of thousands of square meters, but the profitability of these plants remains uncertain.

The heat emitted by the sun is indirectly used in thermodynamic power plants to obtain electrical energy. By convex mirrors the light rays are concentrated in the tubes containing oil. The heated oil is used to evaporate the water and by steam a turbine is activated thus obtaining the electric current.

Like the sun, wind energy can also be used to transform it into electrical energy. Last year, for example, there were three billion kilowatts x hours of wind energy. Most of the world is produced in California (80%), United States. In France, however, production is very low, but it is expected to install generators of 300 and 200 kW respectively in Dunkerke and Port-la-Nouvel.

The Dunkerke will be made by the Dutch firm HMZ-Windmaster and will produce 480 MWh. The propeller will have arms of 25 meters in diameter and the electricity generated will be incorporated into the urban grid. 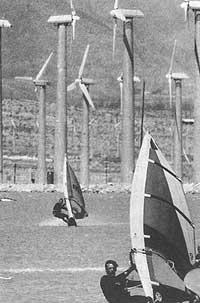 California Wind Farm. Last year there were three billion kWh of wind energy. Most of the world is produced in California, 80%.

In France there was a single house dedicated to the manufacture of wind generators, called Aerowatt. However, last year it was acquired by the Vergnet, S.A. pump industry, which continues to manufacture wind generators. For a municipality of 2,000 inhabitants of the island of Desirade, near Guadalupe, 12 machines will be built, which will produce a total energy of 700,000 kWh annually. The cost of the project amounts to 130 million pesetas.

The Earth has a huge heat reserve inside. Despite obtaining this energy, between 1976 and 1986 more than 60 installations have been carried out up to waters of about 1,500 meters of depth. However, when the price of oil declined in 1986, the development of these facilities stagnated.

Other projects are the use of deepest geothermal energy (about 3,500 meters). The village of Soulko-sous-Forets, in Lora, has dug 15 meters daily. In this locality the average temperature rises between 5 and C for every 100 meters of depth, twice as fast as anywhere else.

To obtain the underground heat, water is injected from a hole, in order to heat it in an underground rupture network and recover it from another hole. French and German research groups work there. The German team is in charge of the hydraulic part of the system and the School of Mines of Paris will simulate in three dimensions the underground heat exchange model. The perforated geological structures and their behavior with pressure hot water will also be analyzed. Since the drilling will take place next to the border between the states of France and Germany, the Germans will conduct geological studies of their party. On the other hand, British geophysicists will sismically investigate the subsoil.

The 2,000 metre hole in 1988 showed the existence of a network of vertical fractures to which hot stones could properly heat water by injecting water. Another hole, which will extend up to 3,500 meters deep, will check if the temperature of the rock is 175 (C or not) as expected, and will extract samples from the rocks present. It is intended to analyze the chemical composition of low rocks and their behavior in water at 175 <unk>. Water may overdissolve at these temperatures.

If the expected conclusions are drawn from these sessions, the project will develop a second phase that will cost 6,000 million pesetas until 1998. Before the end of the century, they want to have an installation that injects water and reaches 100 cubic meters of hot water per hour. Initially, the power plant will have a power of 1 or 2 megawatts. 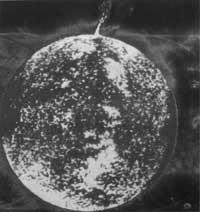