Have managed to measure some properties of einstein

Researchers from the Berkeley Laboratory and Georgetown University have managed to create einstein so that some of its properties can be studied and measured. With the creation of 250 nanograms, they were able to measure, among other things, the link length (distance between linked atoms). The results have been published in the journal Nature.

The einstein was discovered at the Berkeley Laboratory in 1952, in the remains of the first hydrogen bomb. Since then very few experiments have been carried out with this element, very difficult to create and very radioactive.

Precisely obtaining a useful sample has been the greatest challenge of researchers. Einsteinium-254 isotope, one of the most stable isotopes of the element, has been used with an average life of 276 days (time required to disintegrate half of the atoms).

They have found unexpected physical and chemical properties and have been able to measure the binding length. The latter is a basic property that serves to understand the interactions of the element with other atoms and molecules. 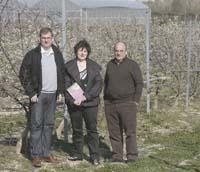