They explain why the crown of the Sun is heated 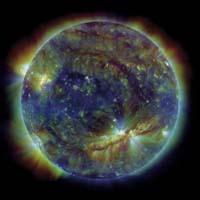 The temperature in the corona of the Sun is 200 times higher than on the surface. Ed. : ANDÉN.

Plasma jets could make the crown warmer than the surface

They have found a possible explanation to a phenomenon that the Sun had been unsolved for some time: In the small section that goes from the surface of the Sun to the crown, the temperature rises enormously, two hundred times more than on the surface of the crown. Some researchers at the Solar and Astrophysics Laboratory, Lockheed Martin, have proposed that this temperature difference may be due to the plasma jets emitted by the Sun occasionally. The research has been published in the journal Science.

It is not the first time that plasma jets are said to be the cause of this strong warming. In addition to the plasma jets, other possible explanations have been proposed for this phenomenon, such as, for example, the incidences and alterations that occur in the magnetic field as a result of violent movements inside the Sun. To date, however, they have found no way to test the proposals. In the case of plasma jets, for example, they were considered too cold to produce this type of heating in the crown. In fact, in the corona of the Sun the temperature is a few million degrees and on the surface several tens of thousands of degrees.

Now the researchers have had the latest technology. They have used data obtained from the Japanese space mission Hinode and the NASA Solar Dynamics Observatory (SDO). The first one takes photographs of the surface of the Sun in wavelengths visible to a resolution of 150 kilometers. The second can measure temperatures between 20,000 °C and 1,000,000 °C, as it can take images in eight intermediate wavelengths of ultraviolet light.

Well, according to the data obtained, the plasma jets heat up to hundreds of thousand degrees on the road to the crown. Taking into account the frequency and intensity of the jets, they see it possible to release from them the energy necessary to take the temperatures measured in the crown.

However, on the web of the journal Nature they have indicated that "it is not being said that this is the only mechanism that heats the crown". And they do not know how the plasma jets are formed or how they are heated. They suspect that behind can be alterations of the magnetic field, the same ones that have been proposed to explain the high temperature of the crown.