This week I remembered the film Blade Runner, the classic 1982 Blade Runner. In a sequence appears a manufacturer of artificial eyes, Hannibal Chew. It makes the eyes of the replicants, that is, for robots that seem human. And I have remembered it because in the journal Nature has published a work of experts who investigate how to make artificial eyes. Of course, the human eye is very complex and fine and it is very difficult to imitate an eye with technology. 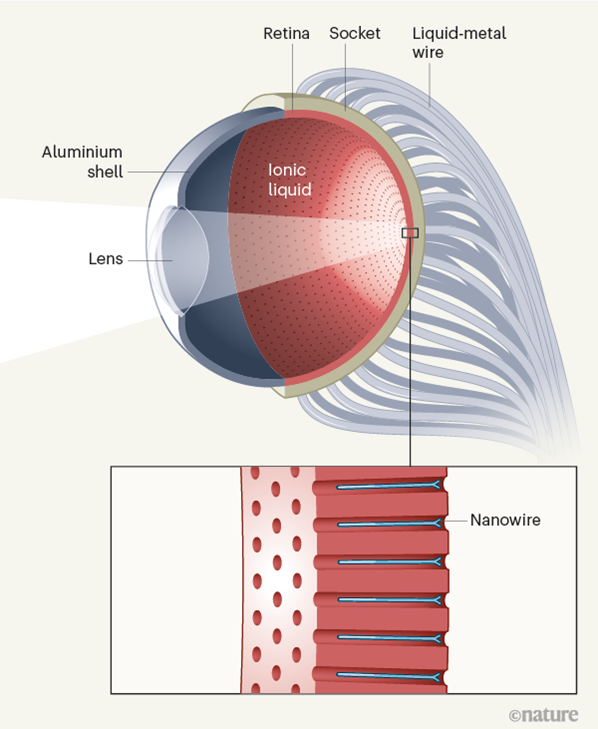 A camera is an artificial eye and today we have surpassed the manufacture of cameras, but we do not talk about it. If we had to put an artificial eye on a person, we would need a very complex fret, a very sophisticated machine or device. That's what I mean.

One of the difficulties, perhaps the largest, is in the back of the eye, in the retina. We all know that the eye is a sphere. It is full of gelatin, called vitreous humor. And counted very simply, on the front of the sphere there is a system of lenses (iris, pupils, crystalline, etc.) and on the back, sensors that capture light from the inside. Photosensitive cells are found in that inner layer we call retina. The structure is complex. There are many types of sensors: some trap light, sticks, other cones red and similar light, other cones green light and others blue. But we have different amounts of these cones: most cones catch the red light, most of them green light and a few blue. And all this system is connected to the brain through the nerves, the main being the optical nerve. In the nerves and brain the image is interpreted. Really complex.

All this has to imitate an artificial eye, and as we said this week there is an article in the journal Nature. Scientists from Hong Kong have made a very advanced artificial eye with incredible technology. The retina is a semisphere of various materials (form that captures light well), with a perovskate hemispherical network, whose sensitivity is key. This artificial retina has small pores in which nerves, nanohilos are connected. They are made up of liquid metals capable of passing the light signal received and returning to its initial state in 24 milliseconds.

So we tell you, maybe, the only thing we think is an artificial robotic structure. But with it much approaches and to the characteristics of the natural eye. Biomimetics is surprising. He sees it at the speed we see, with the same precision and with the same almost angular vision.

There has been a spectacular breakthrough with respect to previous artificial eyes. Huge. One day the people who have lost sight will be able to take advantage of this type of artificial eyes to see them again as almost the others.

Do androids dream with elecric sheeps?