Lumbar pain and sciatica have affected man for many years, but the creator of these symptoms was not known until 1934. This year Mixter and Bar considered the prolapse or output of intervertebral discs as a cause of everything. What these two researchers explained today is proven to be the main cause, but it is not the only one.

The intervertebral disc is an elastic structure whose main function is to transmit and absorb the loads that support. The discs are formed by two parts: the exterior (composed of fibers arranged in the form of ananulus or onion layers) and the interior (called mammal nucleus and formed by abundant water, which causes an equitable distribution of loads). But age and/or pathological conditions cause the disc to lose load distribution capacity because the dense core loses water (the 18-year-old has 80% water, while the 80-year-old has 60% water). Cracks occur in rings that can be radial or concentric. From these cracks, given the different positions of the column, the pulpy nucleus can be extracted by compressing the nerve roots of the ornomuin or the ornomuine itself.

To solve the compression problems generated by the disc, Mixter and Bar used open surgery from behind instead of laminectomies, that is, acting directly on their back. This technique is common in lumbar disc surgery. By 1967 Smith created another technique: chemonucleosis. The technique consists of the injection of chemoapaine, which dissolves the components of the mammalian nucleus and subsequently resurfaces by eliminating pain abruptly, but the problem of this technique is that it can only be used once due to the risk of anaphylactic allergic reactions. Subsequently, percutaneous techniques (intermediate skin) have been explained to remove the injured discs: first the technique of Hijikata, then the techniques of Kambin and Gellman. In 1985 Oni and his team, after analyzing percutaneous techniques, saw that the surgical materials used were too thick and that it was necessary to pursue the peritoneum; and from the material intervention that ophthalmologists used in the vitrectomy, they created a tool for the extraction of the lumbar disc: Nucleotome.

The cutting tool appears in this box.

This created Automated percutaneous lumbar disectomy. It was thought to be a panacea for all discontinuous discs, but when using them it was not so, since the results were not as good as expected. Only 55% of cases were successful. The best selection of patients was 73% of the success. From 1988 this technique is used in Donostia-San Sebastian and will be generalized with the implantation of the disco-manometer.

The disco-manometer was designed at the University of Bordeaux, in whose design process Dr. Algara of Barcelona participated. With this technique, research is carried out in the preparation of the disc (injecting liquid to check its physical behavior) and the pressure measurement is carried out, classifying it in four groups. After processing the symptoms and pressure measures in the computer, according to these four groups it is decided if the most convenient is chemonucleosis, percutaneous or automated manual nucleotomy, or if it is classical surgery. 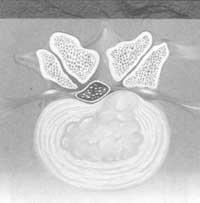 According to Dr. Agustín Alvarez, success with automated percutaneous nucleotomy is expected at 80%-90%. Until the creation of the disco-manometry, the aptitudes for automatic nucleotomy do not seem clear and although the radiological controls are increasingly sophisticated, this only qualifies the pathological disks, but without quantifying the level of disk expenditure. The manometry began to be used in 1987, but is currently being presented on the market. It first appeared in the Basque Country on June 9, 1989, when it was applied to 4 patients from “San Juan de Dios” in San Sebastian with shot. Dr. Carlos Algara and Dr. Javier Castilla, both from the Dexeus Institute in Barcelona, and Dr. Agustín Álvarez, chief clinical officer of “Pakea” participated in it. The latter explained before the intervention: “Before the operation we must see the pressure, since the disco-manometry test lasts a minute and has a morbidity lower than the X-ray or discoscanner.”

Despite the advance of the disco-manometry, the possibilities of actually automated percutaneous nucleotomy are very evident, being used under local anesthesia and radiological control for the removal of the injured disc. Before the implantation of this discotomy, a conventional surgical technique was necessary (muscle dissection, removal of bone fragments, etc. ). All this implies an extension of the hospitalization period, a decrease in recovery and an increase in economic costs. The automated percutaneous discotomy consists in the introduction of a steel cannula, under local anesthesia, through a 2 mm incision (located 12 cm from the spine) after the patient's prompt position, to the disc, which is under local anesthesia, so that if it irritates the nerve structures, you can tell us if you have root pain. 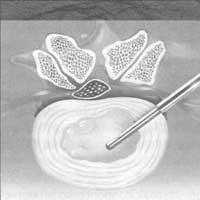 After the cut the hernia disappears.

Upon reaching the disc a hole is made in the ring and then the nucleotome is inserted through the cannula. This nucleotome is based on the guilotine system and, sucking from a lateral opening, the piece of disk enters the nucleotome after being cut by a machete. It is transported to a bottle thanks to absorption. The total weight of the cut parts can vary between 1 gram and 7 grams.

As we can see, the advantages of this technique are very remarkable: 1. Does not require blood technique; 2. It can be done with local anesthesia; 3. Has no allergic complications; 4. It can be done in the outpatient; 5. This technique considerably reduces the inability to work (both physical and psychological); 6. Health expenditure is greatly reduced. But this technique also has its defects and Dr. Alvarez states that “the biggest mistake of this technique is the inability to use it on all discontinuous disks. A specific selection of patients should be made and if in doubt the discomanometry would clarify what to do before the cut.

The only discontinuities that must be operated by this technique are those in which the mammalian nucleus leaves the disc. If the disc is fragmented, "kidnapped" or fallen around nerve roots, this technique cannot be used. As the whole kernel does not come out, there may be recurrences (other disk breaks on the operated disk) and occasionally a 15% failure. You have other defects: nerve root injuries are rare, but some cases of paraparesis have been reported. Vascular lesions may also occur, but this is unusual.”

Patients with floppy disks include two groups: one that can take advantage of automated percutaneous nucleotomy and one that does not allow the use of the nucleotome. In this first group, uncomplicated disk breaks occur with any of the following symptoms: Leg 1 pain is stronger than back pain; 2. Parestasis (tingling) in a dermatoma; 3. Demonstrative neurological findings; 4. No recovery after 6 weeks of conservative treatment; 5. The scanner shows the lower ligament interruption. 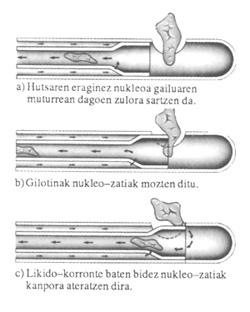 Patients in the second group do not meet the requirements needed to use the nucleotome: 1 for spinal arthritis or any other change, 2 for infection or other risk conditions.

Note that all material used in nucleotomy is disposable and this tray or kit is 150,000 pts. that is worth around. It seems expensive, but valuing job disabilities, hospital stays and medication, statistics say it saves 40% compared to traditional surgery. The immediate application of this new technique, once the interruption begins, allows the patient to work after 3 weeks, but the traditional technique can take 3, 4 or 6 months before starting work and also has more complications. It seems that with automated percutaneous nucleotomy the results are good from the beginning and patients do not suffer pain.

This technique represents a significant advance in the world of medicine, but researchers do not stop working and thanks to it Science and Medicine are taking fundamental steps. When will another fascinating technique appear? Soon, of course. 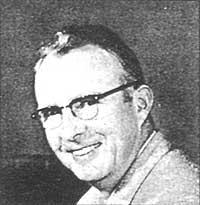