If the trees were talking, what would not count, for example, the five-century oak forests of the Alavese forests. They don't speak, but they keep the marks of time right. And these are the brands that Josue Susperregi Lasalde reads. In the living trees, it starts to pull the thread of time, and it continues in ancient woods that have been trees. Shooter, XII. It has reached the 20th century.

Remember perfectly how he wrote to archaeologist Nigel Nayling in 2005: “Thank you for sending data, but I don’t find any synchronisation with our references.” Nayling was trying to figure out if a ship that appeared in the city of Newport (Wales) was when and where it was. After analyzing the wood rings of the ship, he soon discovered that it was not British wood and sent the data to European partners, including Josue Susperregi Lasalde, researcher at Arkeolan. Susperregi got nothing. No, in that first attempt.

Susperregi had only five or six years in dendrochronology, dating wood pieces by reading the tree cultivation rings. I didn't know yet, but I had built the reference chronology. Although it reached the 19th century, it was not enough for the Newport ship.

In Arkeolan, Irun, the dendrochronology laboratory was created at the end of 2000. Since then Susperregi has collected and collected samples. “To start dendrochronology, it is necessary to create reference chronology, starting with live trees,” he explains. “The first step is to find very old trees.”

References by species and climatic zones. They chose oak. “99% of the wood used in Euskal Herria for the structure of the buildings is oak,” says Susperregi.

He started looking for old oak trees in the area, in Gipuzkoa. “There are old trees, but almost all are lepated and inside are empty.” This effect occurs in most trees. The ginbeleta was introduced into a bunch of trees and they were able to take samples between 200 and 250 years. But they needed more.

They opened the search field and got what they needed in the Alavese mountains: “We discovered impressive forests and very old trees between 450-500 years.” In addition, the Alavese trees were much more appropriate for dendrochronology. “We need the tree to record the sign of climate,” explains Susperregi. The climate marks the trees, creating rings based on the time it's made every year. And that's what the dendrochronologists read.

“In Gipuzkoa, especially on the coast, the winters are very temperate, there is never a lack of precipitation and trees grow very comfortable,” says Susperregi. “In the Alavese mountains it is very cold in winter and very little rain in summer; the growth rates are much better.” 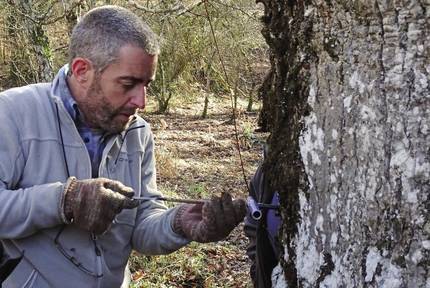 The thread of time

For twenty years he has read the rings of hundreds and hundreds of trees and many older woods. He estimates he has about 8,000 samples in the workshop. “Now we have the last 800 years very well recorded, reference curves XII. They reach the end of the 20th century.”

It seems a lot, but “Ireland and Germany have around 8,000 years of curves,” says Susperregi. “These curves are used to calibrate the data using carbon-14, it is incredible. They have been working for many years, and they also have peatlands where the entire forest is kept underground. It's wonderful."

“Here we are 40-50 years behind.” And with very few resources. At first they were two people, but only Susperregi continues. “In many universities there are dendrochronology departments,” he compares.

He dreams of coming to Roman times, because in Euskal Herria we have remains of that time. But if the foot on the ground, “would complete the last millennium, I would be happy, that’s my realistic goal,” he recognizes.

That will not be easy either. XII. and XI. Find wood for centuries. “There will surely be, but we have to look for a lot,” says Susperregi. He recently discovered the 14th. [A house with wood from the 20th century]. “Super surprising, because seen from outside nobody would tell you. It's a simple, fairly small house. That, yes, is next to the church; it would probably be one of the first houses of the people.

He also has experience in weddings. Susperregi has shown that they emerged before what they believed. XVI. They believed that they were created at the beginning of the 20th century, but when the Lazkao and Ezkio, Maizgoena and Zen dated, it was clear. in the middle of the 20th century. “In addition, in both cases I could get to know the year when the tree was torn down,” he stressed. 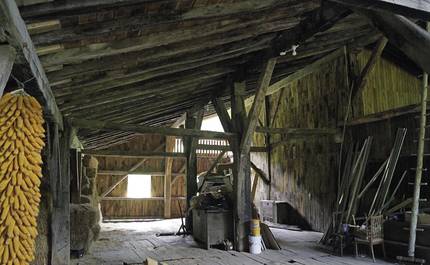 [Deviation from the Zen dwelling (Ezkio)]. Susperregi has been able to specify that for the construction of this dwelling trees were cut in 1453. ED. : Ibon Telleria.

Very precise data can be made with dendrochronology, according to the sample. “Pros and cons. Carbon 14, for example, always gives you a date and requires a very small sample, a few grams. But it gives little precision.” Regarding dendrochronology, the main limitation is that the result depends on the characteristics of the sample. “We need the sample to have a minimum number of rings to be able to compare it statistically with the reference curves. If you have a 20-30 ring succession, it is almost impossible to get a good synchronization, and if you have between 80 and 100 you will get a very good result.”

Where synchronization is achieved, three levels of precision can be reached. If the sample has only carpentry (internal part of the tree, dead wood), it may only be known that it is after the date of the last ring. If you have part of the wood (living part outside the trunk, clearer than the carpenter), you can calculate approximately the amount of wood that removed the wood. To do this, Susperregi is currently defining the number of rings that native oak wood usually has, while using the Aquitaine reference: 10-40 rings. “If in a sample I find 7 rings of Zurgizene, I can know that with the date of the last ring, adding 3 and 33, that tree was cut in that interval,” he explained.

And the last case is that there are all the rings with the skin, or without the skin, but so you can see that the last ring is there. In this case you can specify the year in which the tree was cut. “And as part of the ring emerges in spring and summer, sometimes you can know at what time of the year it was shot down.”

He discovered all the rings in the Maizgoena and Zen houses, and he was able to determine that the remains of the work were demolished in 1445 and 1453 respectively. The houses that would be built immediately after their demolition, as Susperregi explains: “There were many theories that said that they allowed wood to dry for several years, but not so. All the work that the woods of a dwelling have is impossible to do in dry wood. They worked with wet wood. In many facades it can also be observed that wood beams are curved, which is because they dried on the ground. There have been many studies and it is well proven.”

In 2015 he dated both houses. “I have already found 40 dependent. Miscellaneous.” [Hypothesis of creation of dwellings XV]. Susperregi believes we need to take it to the beginning of the century. “And we have to find the structures that preceded the houses. I don’t think that from the prehistoric kites they would pass directly to the houses.”

In addition to the houses, Susperregi has dated from everything, churches, palations, tower houses, prey, springs… Also boats. “The Newport was exciting.” In that first attempt, there were no results, but in the following years, the reference curve was completed.

The key was the help of Alavese carpenters. They made furniture with demolition material. He contacted them and told them what he was in. “It was about what face they looked at me.” He left them with a box and asked them to, when they found woods and rings that looked old, cut a piece to store it in the box and, once filled, call. “This is how we were for a long time. I went and found great treasures.”

Those carpenters taught Susperregi how interesting the tables that in their day, without a saw, were drawn directly from the trunk with their wedges. It is said that they were used as raincoats in the past. “I had 300 ring tables. [Yellow tables XVI]. If they're cut in the 18th century, we go to the 13th century. My curves took me 200 to 300 years ago.” 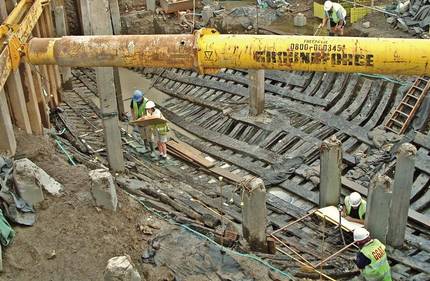 Traces of a wooden boat appeared in the city of Newport, Wales. Susperregi was able to clarify that it is wood from Euskal Herria, XV. Elaborated in the 20th century. ED. : Owain/CC BY-SA 3.0.

“Every time you make an improvement of this kind in the references, try again with those samples with which you did not manage to date,” explains Susperregi. One day it occurred to him to review the details of the Newport boat. “He gave me almost a heart attack! The synchronization was complete.”

“‘Nigel, you have to come here’, I told him; ‘I have managed to date the ship, it is from here’”. For a week he was in Nayling Arkeolan and confirmed the discovery of Susperregi: The boat that appeared in Newport was built in the Basque Country in the 15th century. [In the 20th century].

“Now I’m refining the chronology and I hope I can more concretize what trees were made with.” In fact, the wider the timeline, the more the origin of the woods can be determined. “They also tell you what valley they took the wood in northern Europe.”

Susperregi has also tried to date the San Juan whale, but in vain. “There are very few samples left, most of them lost. Nobody has them.” Canadians tried much earlier. The ship appeared on Red Bay in 1978. And to be able to date, in the 1980s, a dendrochronologist was sent to the Basque Country to take samples of his trees and historical buildings. “Canadians analyzed these samples and concluded that no dendrochronology could be done here.”

There is great variability: “If you compare logs of the same age, one of those received in Donostia or Hernani has nothing to do with one received in Bergara; in one of them the width of the rings may be double or triple the other.” With such versatility, it's not easy to do dendrochronology here. But Susperregi has succeeded.

He regretted that there was no dendrochronology here, for example, to study the climate of the past. This is the second great application of dendrochronology. Susperregi also did a work on this. [Tree crops in Álava at the meteorological station of Vitoria-Gasteiz XX]. It was paired with data collected from the beginning of the 20th century, finding connections with summer rainfall and winter temperatures. So he calculated the summer precipitation of the last 400 years. “Beautiful things came out, like the ones that made droughts coincide with documentary data that collected the burglaries and the processions to ask for rain.”

“We have old trees that record climate well and can be a big contribution to climate change research. It's a shame not to take advantage of it." However, it is satisfied with the work done. “When I started I had the refusal of the Canadians, it could not be done. I have been 20 years.” Now Canadian students also come to learn how to do dendrochronology. 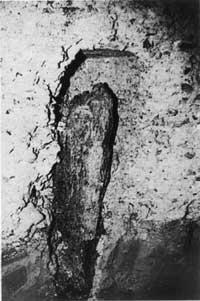 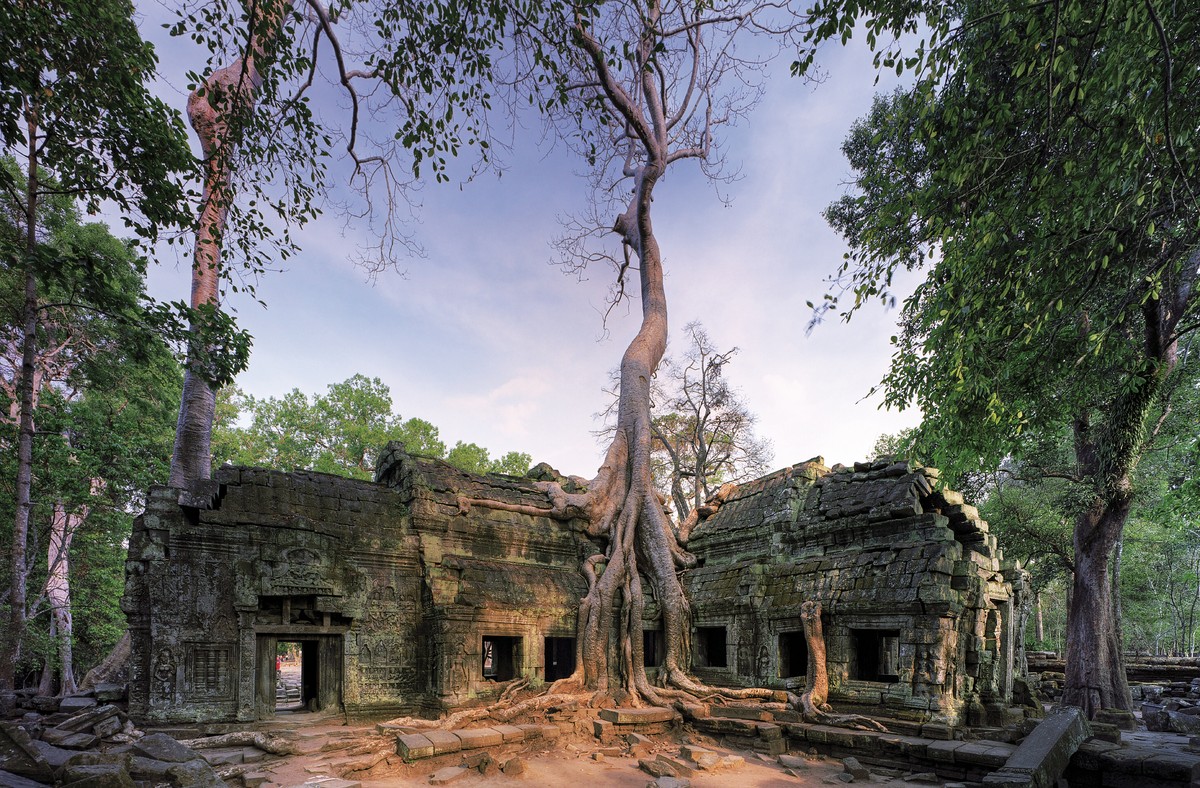