Rome a. C. It was founded in 753. Throughout its early centuries, it was only a normal nation like the others, but a. C. III. Since the 19th century (after the Punic wars) it began to become more important. However, as a peasant and fighting people during all these years, he did not care too much about philosophical and scientific problems and his cultural concerns, so to speak, were mostly administrative and legal. 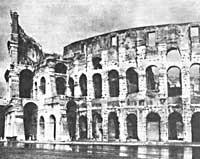 Romans In 168, due to the conquest of Macedonia, they began to closely relate to Greek culture. In principle these contacts were not easy. The Romans only saw the danger of introducing Greek culture and fisolofia into Rome, since through them the true identity and peculiarities of the Romans could be questioned or picota.

Therefore, the most conservative of Rome, like Caton, imposed themselves on this entry. However, culture is culture and although in the beginning I did not want to conquer more than the results of science or, rather, of technique, gradually the rest of the branches of culture were rooted in Rome. Therefore, a. C. Although in the first century the Romans had inherited the world, Greek culture had at its feet Rome.

Cicero, for example (B.C. 106-43) tried to gather in De Natura Deorum what was once known of Greek science. Along with this and building a teleological theory about the human body, it shook with hardness some beliefs and beliefs of magic.

Lukrezio Karo, a contemporary of Cicero, lived at that time. About the life of this man, perhaps because he lived out of politics and was very lonely, we know little and what we know through Cicero.

De rerum natura wrote a great poem. This work is a passionate defense of epicurea philosophy, especially its atomics physics. De rerum is a nature divided into six books that, as the name suggests, wants to express the nature of things: their origin, their development and their end. Lucrezio tries to provide a physical view of the universe, discarding some mythological judgments.

Therefore, Lucrezio defended science and, for various reasons, attacked the superstitions that existed at that time. In his first book he clearly indicates that religion has been the source of many crimes: Tantum religio potuit snadere malumn. In this book he confirms that matter is formed by fractions separated from each other and in empty space. With his opinions and examples he tried to prove that the vacuum is indefinite. And prove that the universe is infinite and that it must be removed from the unquantifiable idea of the atom.

The second book deals with the movement of atoms. Atomic movement is not providential; atoms move with random irregular displacements, generating causal but free possibilities. In his opinion, the total number of materas in the universe is always the same, although atoms are different.

The third book begins with the exaltation of Epicurus, but it is not so important from the scientific point of view: It deals with the nature of the soul. Lucrezio says that the soul is formed by fractions and will confess that with intelligence it is part of the body.

In his fourth book he will bring his drills. These simulacros are phenomena that cannot be observed directly: illusions, images, etc. Lukrezio will try to express all these phenomena through the emanations of atoms that reach our eyes, and will give good examples through the images that are reflected in the mirrors. He established the priority of the sensations of the senses by the way of knowledge and, although these sometimes lead to error, will tell us that when they are true they are the basis of knowledge. Somehow we can say that he is the very creator of current psychology. He defended materialism against vitalism and, denying that each organ has been made to use it us, will claim that the use makes the organ.

In Book 5 astronomy (movements of celestial bodies, sizes of the Sun and the Moon, their phases and eclipses, etc. ). ), organic evolution (putting a staggering: plants, animals, finally man) and anthropology (human level of prehistory, importance of technique in the development of man, creation of language, discovery of fire, etc.) study.

His latest book analyses meteorology, geography and medicine. As we can see, Lucrezio's work was an authentic encyclopedic work and it can be said that it is the greatest rationalist example that ancient Rome can show.

Of this century and another man of great importance to us, the Caius Julius Caesar (a.C.) 100-44). This one, with the technical support of Sosigenes, set a reformed Julian calendar. This calendar corresponds to the year three hundred and sixty-five days and fourth. This calculation is too long with trusses and with the passage of time it was an inadequacy between days and seasons. But he remained in it until 1582. Still the error was ten days and Gregory XIII. He ordered to direct the Pope.

Caesar made a plan to draw a map of the Roman Empire, but he did not. Finally, Agrippa was able to make the map in the time of Augustus and not only that, but also a great map of the world. 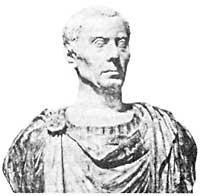 Another great man who shines these years is Vitrubio. His life is almost unknown. It is supposed to be the architect of the basilica built to Fano and therefore to. C. It is believed that he lived in the second half of the first century. He did a single job: De architectura . This work is divided into ten books: The first analyses the principles of architecture. History and materials of architecture. 3rd Dedicated to Ionian temples. In the 4th this theme is extended to the Doric and Corinthian temples. In the 5th is responsible for public works: theatres, spas and docks. In the 6th by the houses: both urban and hamlets. 7th Interior decoration. In 8 the water supply is studied. In 9 will be investigated quadrants and clocks, and in 10 will focus on mechanical and military engineering.

Vitrubio's work, without lips, is encyclopedic. In no case is it an isolated work on architecture. From history to the arts, he deals with all the topics necessary for the integral education of an architect. Vitrubio was the one understood today as a humanist. However, he also knows and analyzes very well the technical aspects.

Along with these two Roman encyclopedists seen, we can now quote the names of three other encyclopedists, although their fame compared to the others is much less. These are Marcus Terentius Varron, Pliny the Elder and Seneca.

Marcus Terentius Varron, a. C. He lived between 116-27. Although in most of his life he was political and military, in old age he was linked to science and, among other topics, he wrote seven scientific books. Varron made a kind of encyclopedia of science and divided it into nine fields: grammar, dialectics, retolica, geometry, arithmetic, astronomy, music, medicine and architecture.

Varron's followers maintained this classification until the middle ages, apart from the last two, medicine and architecture. They are divided into seven sections: Under the name of Trivium and Quadrivium he formed seven liberal arts. Varrón, then, provided all the Greek education and culture suitable for the future development of Roman science.

Plinio Viejo, d.C. He lived between 23 and 79 years. He wrote an encyclopedic work entitled Naturalis historia and composed of twenty books. As a basis, he studied the works of the previous ones. In this work he used works of one hundred and forty-three Romans and two hundred and twenty-six Greek authors, mostly missing. The main thread that lies in the history of Naturalis is that Nature is at the service of man, and when describing natural things will always take as reference man. 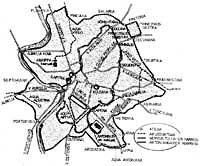 Seneca, finally, is much more important in fisolophony than in science. But I think that we must also mention it in this area. Your Lives Since 3rd A.D. It lasted until 65. Of stoic philosophy, he tried to make a complete description of natural phenomena in his work Naturalis questiones. In this work he will deal especially with astronomy, meteorology, physics and geography. But since many Romans cared much more about the problems of ethics than others, we have to recognize that it was more moralistic than physical.