Geometric road to the sky

The Middle Ages was a dark time in Europe. So it is said many times, and there is no doubt that the history of numbers confirms this idea: Until 1202 the only numbers in Europe were the Romans, represented by a few letters. Complex mathematical calculations were impossible with those numbers. However, the masters of that dark age built the first Gothic cathedrals. How is a great Gothic cathedral made without complex calculations? The secret is geometry. The teachers had no adequate number, but the polygon did. 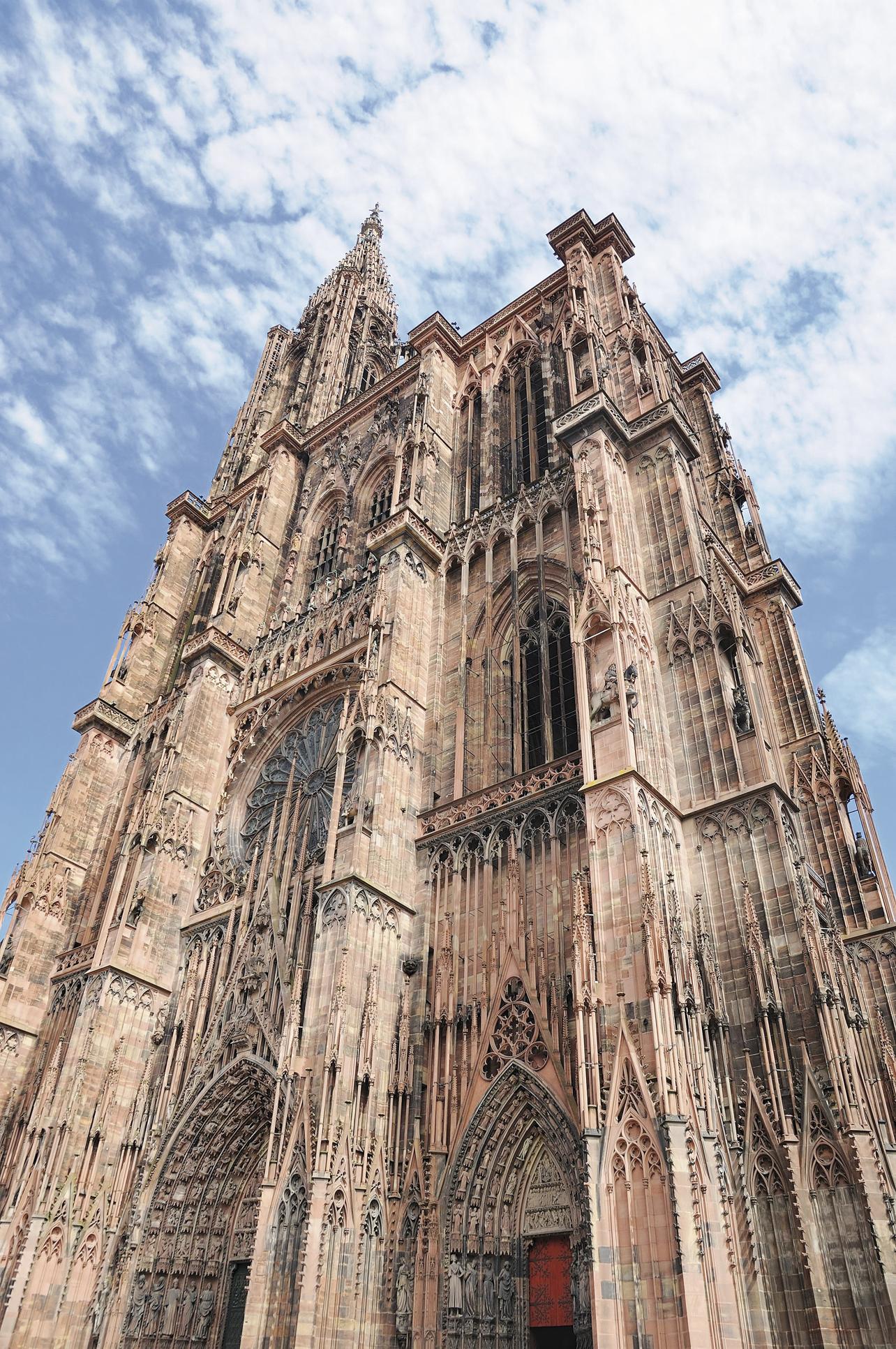 Strasbourg Cathedral has been the tallest building in the world for hundreds of years. The 142 metre tower was completed in 1439. With the help of geometry they reached almost zero. or at least some techniques then had to be adapted, as never before. He began to use the ogival arch to reach the height, and placed on the walls imposing windows and stained glass to create a great luminosity inside the basilica. 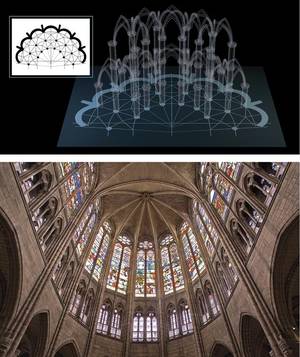 Plan of the geometry of the crown of the basilica of Saint Denis, restored in Gothic style. Above, crown plane and basic structure on that plane. These arches did not fall in the storm of January 19, 1144, although they were not yet united. Below, image of the crown. Considered the first gothic construction in history. Ed. Guillermo Roa/Elhuyar Foundation; © Renata Sedmakova/350RF

This brought some problems. Walls full of windows could not resist the weight of the ceiling vaults. "The problem was solved by geometry and arithmetic," wrote Abbot Suger. The truth is that in that building there was little arithmetic and a lot of geometry. But there were also a lot of engineering, they designed arches that bore the weight and directed the tensions down, added arbotantes and buttresses to support the geometry that sustained the weight, and the Gothic style was born.

In the Gothic buildings there was not much arithmetic. The master builders lacked the right numbers to perform the calculations: the Arabic numbers. These are the numbers we currently use: 1, 2, 3, etc. Originally they were Indians, but the Europeans learned from the Arabs and therefore receive that name.

XIII. They arrived in Europe at the beginning of the 20th century, with the contribution of the Italian mathematician Leonardo Pisano, known
as Fibonacci. He traveled to Muslim villages to learn mathematics and, when he returned, wrote the book Abaci abaci to spread what he learned with Muslims. It was the year 1202. In the book, for example, he wrote about zero. And about fractions and other properties of numbers. In short, Fibonacci presented Europeans with a systematic and powerful writing of numbers. They were suitable for arithmetic operations, with prices, weights, measures, taxes and any other magnitude. 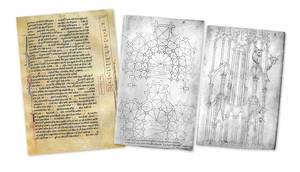 On the left, a page from the book Liber abaci de Fibonacci. With this book of 1202 the Arabic numbers were introduced in Europe. Until then (and then for many years), Europeans made arithmetic with Roman numerals. In the center and on the right, two examples of the drawings of the notebook Livre de Portraiture by the French architect Villard de Honnencourt. The drawings of this notebook are very important, since since the Middle Ages hardly graphic materials have been preserved within the framework of the construction of the cathedrals. Ed. National Library of Firenze/Public Domain; Bibliothèque Nationale, Paris/Public Domain

The construction masters did not make a real calculation, nor did they know trigonometry, and the only way to work with angles was to apply geometry. Very complex geometry, but appropriate.

The plant of the south tower of Chartres cathedral, for example, was designed from a complex octagon pattern. They are many octagons, inscribed to each other. Often the starting point was simpler polygons, squares, triangles and circles, but their combination is very complex. The prestigious expert, the historian Titus Burckhardt, claimed that it is very difficult to guess what these first patterns are through the cathedral itself, but fortunately some design drawings have remained until today. XIII. The best-known is the Livre de Portraiture notebook by the 18th century French architect Villard de Honnencourt, whose drawings perfectly illustrate the geometry used for the renovation of the basilica of Saint Denis.

Burckhardt claims that geometry performs two functions. On the one hand, if applied correctly, that the structures it generates are stable and therefore the cathedrals do not fall. And on the other hand, geometry allowed to build giant cathedrals from a scheme designed in a small scroll. At that time it was impossible to calculate the final dimensions of these small planes. They had no specific means to do so. In the scaling process, precision was completely lost, endangering the fall of the building. On the contrary, being able to draw large polygons, they saved the scaling. "Although they used strings as bars and rules, and if they had a certain degree of flexibility, in general the measurements are accurate, within the error of a few inches"; enough to hold standing a Gothic cathedral. 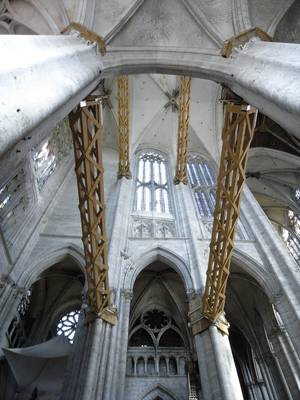 Interior of the cathedral of Beauvais. The cathedral was designed to be larger than that of Amiens, but it was too large and they fell the vault twice under construction. It is currently standing thanks to steel supports. Ed. Nina J. General Information

They built true giants that, by medieval standards, came almost to heaven. The 142-metre tall tower of Strasbourg Cathedral was for two hundred years the tallest building in the world. Not only from the outside, but also from the inside, the high temples. The vault of the central nave of the basilica of Saint Denis is 29 metres away; those of the cathedrals of Chartres and Amiens, for example, are 37 and 42 metres high respectively. A medieval person could not find in the world more interior space than a Gothic cathedral.

Cathedrals, besides being large buildings, became symbols of power. It was a demonstration of clergy before civil authorities, which became an indicator of the importance of dioceses. All the bishops wanted to be a cathedral more spectacular than those of neighboring cities. XIII. In the 19th century, in northern France, a competition was launched for the construction of the largest cathedral and the construction masters became stars.

The construction of the cathedrals became a nonsense, competition that took to the limit. The case of Beauvais Cathedral is significant. They wanted to build bigger than Amiens and in 1248 they fell the main vault in the middle of the construction process. They began to work and, in 1573, fell again. The cathedral has remained unfinished and today stands thanks to gigantic steel supports.

Amiens Cathedral itself also has problems. Columbia University experts have analyzed the structure of the building by laser, whose results are not relaxing. The columns of the main nave, for example, should be straight but are tilting; in one direction, in the centre, and in the opposite direction, in the upper part. There are points with a deviation of 20 centimeters. Too much. And computer models show that the cathedral will fall sooner or later, if no measures are taken. Problems begin when they are built and medieval teachers make arrangements. Among other things, they had to forge a huge iron chain to keep the perimeter of the main ship.

Despite the problems, seven or eight centuries later, the results of medieval competition are standing and visible in many European countries. The main tourist attraction of many cities remains the Gothic cathedral. 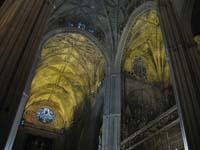 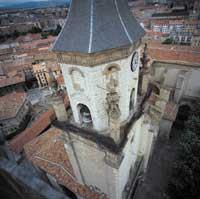