Absolute zero getting closer and closer

In the race for low temperatures new brands have been launched. To reach absolute zero (-273.15 °C or 0 Kelvin), Kelvin is much less than one degree, only one million degrees.
We in our lives normally use the scale of Celsius or degrees Celsius to measure the temperature of things. The temperature at which the water is frozen is 0°C, below which the maximum temperature can be -273.15°C or zero absolute. Physically that is the lower theoretical limit. However, when working at very low temperatures, the Kelvin scale is used. In this scale corresponds to -273,15°C 0 K or zero absolute.

In the Superior General School of Paris, last year the lowest temperature was reached in some cesium atoms: 2.5 million Kelvin. But a few weeks later the news came from Washington, because Carl Wieman had dropped the brand in his laboratory to 1.1 microcelvion (1,1x10 -6K).

Cesium atoms have been frozen up to 2,5x10 -6K. Its initial speed is 300 m/s, but when colliding with the six-ray photons have been maintained for a few seconds at 1 cm/s.

In the race to absolute zero, physicists do not stop overcoming the obstacles after the battle. It is memorable the brand that obtained in 1908 the Dutch Kamerlingh Onnes. He, in his laboratory, made him a refrigerated liquid before anyone at a temperature of 4.3 K. Since then, physicists have been immersed in the submultiples of grade K. In the 70's they developed techniques to measure the thousandth degree and today they reach the million.

The properties of liquid helium are basically those that take advantage of the classic physics of very low temperature. It uses dilution cryostats that have been ultrasofistic-relatives to the fridges of the houses and currently sold appliances to obtain 5 milicelvin.

However, the Paris Higher School has used another system. The physicist Claude Cohen-Tannoudji and his companions have had a cubic centimeter of gaseous cesium in 2.5 microcelvines for a few seconds, only at one point.

If you take into account only the temperature apart from the mass, the technique called adiabatic desimantation allows to obtain colder temperatures. Using this technique, as with liquid helium or gaseous cesium, the block of material does not cool, but only some particles of this block.

In 1956 the Hungarian Nicholas Kurti cooled in a copper bar the small magnets (spins) that produce copper cores up to 12 microcelvines. Then, following the same path, the Finnish Lounasmaa has reached with its collaborators a temperature of 20 nanocelvine (20x10 -9K). It must be made clear, however, that the three techniques that use liquid helium, gaseous cesium and adiabatic desimantation respectively have nothing to do with. The measure of temperature is the only common in the three techniques. Let's see what happens to those low temperatures.

Organization of the matter in the three techniques

The dilution cryostats take advantage of the phase changes inside the helium (from gas to liquid) to descend to the milicelvine and it is organized when the matter cools.

In adiabatic desimantation, a high-intensity magnetic field is applied to a copper bar. The spins of the nucleus that until then wandered aimlessly align in the direction of the field lines. If the part of the metal is well isolated from external heat inputs and the intensity of the magnetic field decreases slowly, the spins are cooled (not all metal) by being prearranged.

The technique used in the Superior School of Paris is the so-called laser cooling. The gaseous cesium protrudes by a small hole of the furnace in a given direction and against this chorrito a laser beam is launched. The photons that touch each particle of cesium stop the movement, like the car the opposite air. In each shock with photons, the velocity of the cesium atom decreases by 3 mm/s.

It seems that this cushioning is not huge, but after colliding with many photons, the velocity of the atom has slowed down to a temperature of 2.5 microcelvines. In fact, on a two-metre route with one hundred thousand crashes the low speed of 300 m/s to one metre or another second. These frozen atoms are stored in an optical warehouse where six laser beams are collected and kept for a few seconds at a speed of 1 cm/s or 2.5 microcelvines. 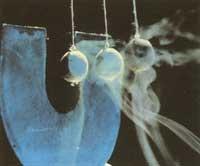 Around the absolute zero, some bodies become superconductors. This superconductivity has also been achieved in some materials at much higher temperatures. The figure's ceramic ball is a superconductor after cooling in liquid nitrogen up to -200ºC (73,15K). The antimagnet magnetic field surrounds it and therefore it is removed. When heated, the ball falls.

As each day marks are consolidated, more than one can ask when absolute zero will be reached. Physicists are getting closer and closer to that zero, of course, but they don't think they get there once again. On the one hand, there are practical reasons that prevent it. Just as a total vacuum cannot be achieved, it is also not possible to get an absolute zero for not having to introduce heat into the test field from the outside. On the other hand, there are theoretical reasons. The third principle of thermodynamics, which so far has governed the physics of thermal changes, denies the possibility of going down to absolute zero.

The main reason for physicists to work at low temperatures is to study matter better. In fact, the movement of particles by heat at room temperature hides certain physical characteristics of matter. Below the temperature of 2.17 K, the helium isotope 4 (with two protons and two neutrons) has a surprising behavior. It is poured without any friction, ascends by the vertical walls of the containers, leaves a hole smaller than the micron without any difficulty and carries the heat a million times easier than any liquid: it becomes a super.

Helium is the only liquid known at the moment and it should be mentioned that these characteristics are similar to those of superconductivity. Superconductivity is a special property of some metals. Below a certain temperature (for example, aluminum below 1.12 K), the metal does not put any obstacle to the passage of the electric current. The atomic resistance is, therefore, zero. The electric current introduced in a ring, for example, would take millions of years to disappear from it.

These curious characteristics of matter are explained by quantum mechanics. At room temperature, the movement produced by heat predominates, but at cold temperatures the quantum properties of matter are made public. In the superfluid helium, for example, groups of atoms are collected. Instead of each atom moving its way, it moves in group. This phenomenon is known as Bose-Einstein condensation, in honor of the two physicists who announced it. In superconductive metals a similar quantum effect occurs. The electrons come together from two to two and behave as a group with a specific objective.

The liquid has superfluidity and superconductivity in metals at low temperatures. Although there are still no similar phenomena in gases, the Paris High School expects the gaseous cesium to be cooled at lower temperatures than a microcelvin.

Other phenomena planned in quantum physics at very low temperatures, such as microscopic electronics, are also studied. In micron-measuring circuits (current electronic chips), the classic electricity laws are not applicable. At temperatures close to a tenth of Kelvina, the electrical resistance of the circuit depends on interferences between the electrons of the current. To change the resistance it is enough to change the position of an atom in the metal to change the resistance of the circuit.

In these conditions, quantum theory should appear spontaneously in a metal ring of very small diameter the infinitesimal electric current. To detect this tiny current, the Grenoble CRTBT (Very Low Temperature Research Center) has mounted a sophisticated measuring device. They will analyze the magnetic field induced to detect in square microns an electric current a thousand million times less than the ampere.

The bases of magnetism of Grenoble are also being studied. The Helium 3 liquid atoms (with one neutron and two protons in the nucleus) behave like magnets at low temperatures, forming a very simple magnetic system. In this way it is intended to verify different theories on magnetism.

The phenomena detected at these low temperatures have already begun to apply. With superconductor magnets, magnetic fields are obtained cheaper than classic coils.

The atomic clocks of Cesio will also be published soon. Its accuracy is 100 times higher than that of today's watches, although the current one is impressive (in ten million years they only have an error of a second).

Astronomers will also be able to enjoy the minicriostate of dilution. Given the size of the shoe box, they can be used in satellites for cooling of the bolometers. The bolometers are high precision devices that are responsible for detecting and measuring the energy transported by luminous radiations. However, working at low temperatures will improve a lot.

Many other improvements are expected thanks to these curious phenomena that have been known in this rapid race to absolute zero.