Dyes are not just colors. The constant research of chemistry after color has had important consequences. He laid the foundations of modern chemistry.

Until the discovery of synthetic tindakaris it was unthinkable to have a similar color range.

Pingmentus and tindakaris are not the same. Punk can type his month. But what is in a painter's palette is pigments. These are the differences. Dyes form a kind of bond in the colored molecules.

The link can be physical (for example in the hydrogen link) or stronger (as in the chemical link). Pigments, however, cover the surface they color by particles. That's why Mona Lisa's smile doesn't show the fabric below. Another general difference is that most dyers are organic compounds and most pigments are inorganic.

People have used inks and pigments for thousands of years. Our ancestors who lived in the caves painted the walls of the house and painted themselves. The first pigment known to civilization was probably blood. Blue-grass is an ancient blue dyeing that many of the ancient dyes originated from berries and vegetable juices.

First artificial dyes produced in large quantities XIX. They were developed in the 19th century. Until then the dryers had their origin in natural raw materials and were obtained by refining plant and animal raw materials. One example was the reddish-purple tinted alizarin. This was obtained by fermentation of the root of the stain basket (coffee related scrub). These vegetable inks are unsustainable. Some lose color quickly and colors are often matt. In addition, in some cases a binder must be added to the material. Binders are generally chromium or similar metals. The dye is precipitated as an insoluble salt between the fabric threads.

Nature presents a great variability of colors. The dyes industry has doubled all these colors and has also created colors never seen in nature.

The first person to achieve synthetic dyeing was William Perkin, an 18-year-old chemistry student, who discovered negligently in 1856. At his home in London he tried to synthesize the drug Kinina. On the contrary, he found a method to synthesize a colorful compound of great brightness. He told the compound mallow. The mallow was bright and long lasting and was responsible for the industrialization of chemistry. From this discovery grew the immense chemical industry we know today.

The Pantone color catalog can give us the idea of the current offer of colors.

Perkin was very lucky. But not because of age, but because at that time the tone was fashionable. His teñidor was worth Bayona. Perkin had a great success. In the following years he built several factories in the London area to produce mallow and other dyes. His bag grew very fast. He was named grandfather when he was only 36 years old.

Synthetic dyes also had medical properties. Researchers engaged in drug manufacturing concluded that if the dyes colored the bacteria more than the surrounding cells, it could be used as a magic bullet to carry the poison to the bacteria. In 1907 Paul Ehrlich discovered that the dyer killed out of coloring bacteria that cause sleep disease. His work served to get a remedy against syphilis.

Tintoreros to be commercial must have five main characteristics. For example, dyed garments should be in contact with our body for a long time. Therefore, dyes should be healthy. Secondly, they should have an intense color. Thirdly, they should be soluble (in most cases) in water, as they are usually passed through an aqueous solution of the dye to dye the materials. Fourth, the dye should be fixed, that is, do not lose color when washing or in the sun. And finally, do not color other materials that are in contact with it.

With some exceptions, dyes used in the textile industry are organic compounds. To synthesize a good dye, chemists must combine the appropriate functional groups to meet the features mentioned above.

Some molecules are very colorful and some are not. Color is a phenomenon caused by absorbed or reflected light. If an object absorbs almost all the radiation, it is black. If it reflects white. If it only absorbs it in some regions of the spectrum, it looks colored. The color depends on the wavelength of the radiations reflected.

In 1876, for the first time, the German chemist Otto Witt related the colour of the dyer to its chemical structure. The teñidor has two distinct parts. One is chromophore, the part of the molecule that produces color. The work of the other part of the molecule consists in the union with the material that will be colored.

The most common chromium is the azo group. This group has two atoms of nitrogen. When the azo group is associated with aromatic compounds, it has delocalized electrons more mobile than electrons from normal bonds.

Molecules should be considered as oscillating and not as two-dimensional fixed objects drawn on a page. Electromagnetic radiation, also light, is able to absorb and emit. All oscillators tend to absorb radiation on their natural frequency. This phenomenon is called resonance.

The absorption of light waves or electromagnetic radiation is similar to the absorption of sound energy. A simple example is the vibration of the guitar strings. If two strings on a guitar are tuned to the same frequency, playing a note will cause sympathetic vibrations on the adjacent string.

In dyes, resonance means that a molecule can absorb radiation at the same frequency as the movement of internal electrons. The reflected light gives it color. 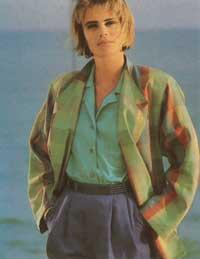 Direct dyeing to dye cellulosic fibres is difficult, as the colours quickly escape.

Auxokromo is a group that can be attached to the structures. They alter the frequency proper to the vibration and therefore the color. Different auxocromes will have different influence on chromophore. Chemicals choose auxocromes that will intensify the color of the dye.

Some inks change color according to acid or basic medium. Some of them, such as orange methyl and phenophthalethins, have a quite significant variation and are used as indicators in chemical laboratories. When the dissolution changes from acidic to basic means, the acid form becomes salt (or salt becomes base). In indicators, color change is due to the difference in intrinsic frequencies between acid and salt molecules.

The girth of the teñidor is the ability to keep the color alive. Advantage of the dye depends on it. Sunlight, friction or air pollution can cause dyeing escape. Water can also do it. At home, washing is the main attack on the girdle. Except in the case of more evasive jeans fashion, the coloration of garments is not desirable. Normally manufacturers get their garments not to lose the original color.

The fondness of the teñidor for adhering to the surface of the substrate, called affinity, is the result of the physical attraction between the material and the teñidor. In many cases it is related to solubility. Researchers continuously wash the dyed substrate to accelerate color evasion and compare it to color standards before and after washing. Level 5 indicates that the dye is very fixed, while level 1 means it sinks easily.

However, researchers are interested in two interrelated effects. The first is the variation of color intensity. The second is to know how escapism has occurred. To check, the undyed material is washed at once and the transmitted color is analyzed.

It is more difficult to analyze the influence of non-liquid agents on dyes. Curtains, for example, easily escape under sunlight. Apparently, the reaction produces free radicals in the dyeing and is destroyed by the chemical reactions they cause.

Currently more than 3,000 different dyes are manufactured. This wide offer is due to the specificity of the dyes. There are very few dyes that properly stain a wide range of materials. In addition, the constant development of new materials poses new challenges to manufacturers of dyes. These new materials should find the way to dye.

Most fabrics should be prepared before dyeing. For example, if we heat cotton together with an alkali hydrolyzes fats and breaks natural oils. Also, the fat of natural wool should be removed before dyeing. Cotton should be mercerized by treatment with a base. This treatment inflates the fiber and facilitates the absorption of the dye. Finally, raw fibers should be treated with bleach before dyeing. Otherwise, the natural yellow would change the color of the dye.

Fiber dyes are usually of two types: reactive and inreactive dyes. The discovery of reactive inks is relatively recent. These react chemically with tissue fiber. In the hundred years following the discovery of the perquins all the dyes were inreactive. The main types of non-reactive dyes are: direct dyes and tinnitors of cuba. The dye particles are trapped between the fibers and thus colored.

Direct inks are still the most used. These types of dyes do not require binders. The first was the red Congo. Its structure is complex and produces a bright vivid color. The red congo was widely used in the 19th century. At the end of the 20th century, but it is no longer used as a carcinogen. Direct dyes are often complex organic molecules with groups of azo associated with benzene rings.

The other component needed to dye is an electrolyte, such as common salt. Therefore, when dyeing is done at home, it is necessary to add salt to the dyeing solution. Direct dyes are very suitable for dyeing wool and silk, but not for coloring cellulosic materials such as cotton and linen.

Direct inks still occupy an important part of the market due to their manufacturing cost and the wide range of colours. However, straight inks are quite sensitive to coal and their escape is easy. Chemical fixers can help fix the dyeing, but in addition to increasing the cost, they are inefficient. 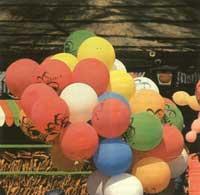 Synthetic inks can color all kinds of materials.

The first was the indigenous. Formerly it was extracted from the blue grass or the indigosphere plant, but from 1897 it is obtained synthetically. The indigenous is the dye used in jeans. Today the dril can be colored with a dye more fixed than the indigo, but in this case the disadvantage has become a virtencia, since the escaped pants are fashionable. Chemically, dyeing needs reduction and oxidation to bind dyeing to tissue.

The biggest disadvantage of this type of dyer is its cost. Being a very elaborate dye, they are expensive. It is also difficult to get red. On top of these drawbacks, the coopers have a great use with different types of fabrics.

The last type of non-reactive dyers is the most important commercially: azo. Manufacturing is also a complex process in which production costs increase. These dyers have a great strength with most cellulosic tissues. The main disadvantages are that most Azo dyes are red and that there is no green.

The biggest breakthrough in dyer chemistry occurred in 1956 when reactive dyes were discovered. The main drawback of non-reactive dyes was that, in general, common fabrics such as cotton and wool were not properly dyeing. In the 1950s most clothing was made from cotton or wool and no synthetic fibers were used. That same year two chemists synthesized the first of the reactive dyes, called Procion tindakaria.

The main characteristic of reactive dyers is their reaction to the substrate. In these dyers, a conventional, intensely colored chromophore is linked to a reactive part that will chemically bind to tissue. They are very good for dyeing cotton, as the dye becomes part of the fiber and are very difficult to escape.

Most synthetic dyes were formerly obtained from coal tar. Now petrochemicals are the main raw material. 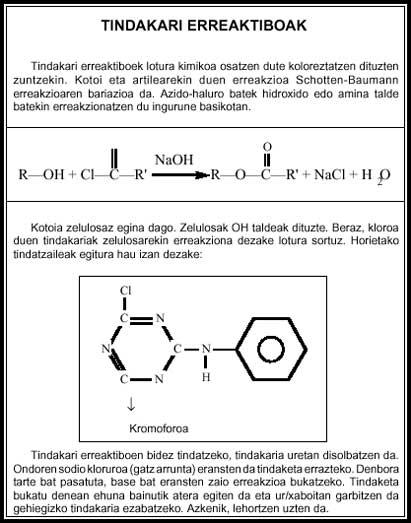