[Stem cells: agents of biomedicine of the future].

Over the last three decades, clinical interest in stem cells has increased considerably. In fact, the potential of these cells for the treatment of various diseases has been demonstrated in numerous studies. Advances in preclinical studies in recent years have led to human stem cell based clinical trials. Although most clinical trials are at an early stage, advanced phase trials have led to the first licensed stem cell products. Specifically, in 2015, in Japan, the product called TemCell® received approval to treat graft versus hostel. In 2018, the European Medicines Agency authorised the first stem cell-based medicine, currently unique, to treat amphibian fistulae causing Crohn’s disease. However, in order to achieve definitive clinical stem cell transplantation, it is still necessary to overcome a number of challenges, among which cellular retention stands out and guarantee its long-term effect. And facing these challenges has been the main objective of the doctoral thesis. 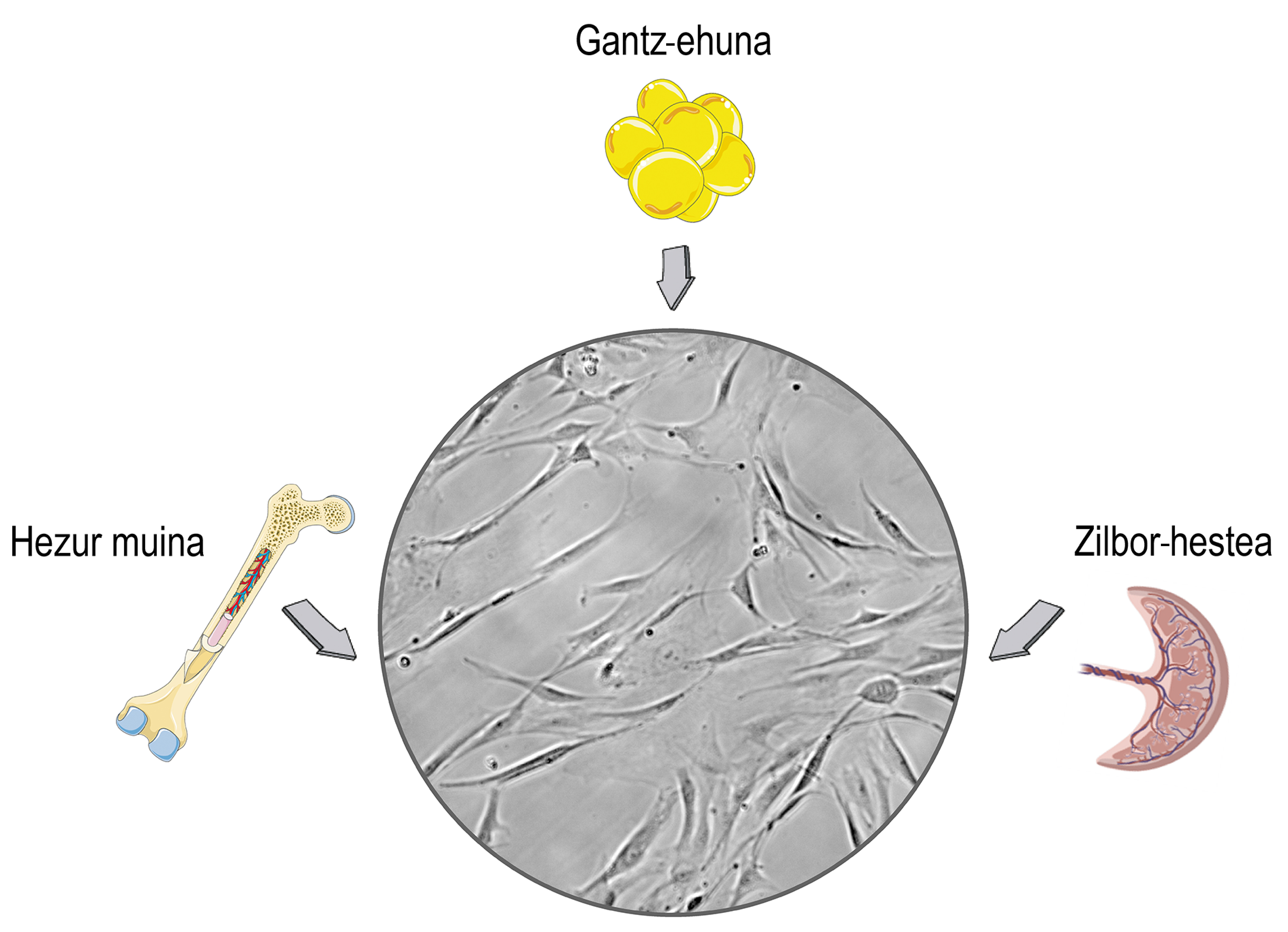 What are stem cells and what therapeutic effects do they have?

Stem cells are cells found in the stromal tissues of mammals. You surely relate its use to ethical and religious debates, and this concern is related to its origin. Stem cells can be isolated from embryonic tissues, which can cause moral problems. The problem is that stem cells, too, we can get them from mature organisms and put those problems aside. Consequently, most investigations are isolated from adult donors, mainly from the umbilical cord, bone marrow and adipose tissue (Figure 1).

The main motivation for using these cells are their therapeutic characteristics. Among them, the best known is their ability to transform into other types of cells. According to the number of cell types that can be distinguished, they are classified into four classes: (1) totipotent, which can be differentiated in all embryonic and non-embryonic (placental) tissues and which have the capacity to form a complete organism; (2) pluripotent, which can be distinguished in cells of all embryonic lineages; (3) multipotent, which are differentiated only in cells of embryonic flax of their origin; and (4) unipotent, which are of a single type. Thanks to this capacity, stem cells have great potential to heal and regenerate tissues. Its use has been studied in depth in bone renewal and cartilage.

In addition to this regenerative capacity, stem cells have another important therapeutic effect: they can regulate the immune system. Although its immunomodulatory action is the result of a complex combination of several mechanisms, the bioactive factors that produce and release cells are considered the main responsible for this activity. These include interleukins, metabolic enzymes, growth factors, and chemokines, which interact with immune cells and regulate their effect.

But how do you know that stem cells should release the bioactive factors? Stem cells perceive what is happening in their microenvironment through their surface Toll-like receptors, trying to balance the situation. For example, at the beginning of an injury, they perceive that there are few inflammatory intermediaries in the environment and consider it a signal of activation of the immune system. Consequently, stem cells secrete several bioactive factors that activate the immune response to initiate the healing process of this injury. As the immune system performs its function, it releases inflammatory mediators. Thus, when the process is carried out, the level of inflammatory mediators is high. When detected, stem cells release bioactive factors that inhibit the immune response and favor tissue healing and homeostasis (Figure 2).

Given the overactivation of the immune system in many diseases, stem cells have become an excellent therapeutic alternative. In fact, reducing the immune response attacks the origin of the disease. Among other things, the use of stem cells to treat graft versus host disease, inflammatory bowel disease or multiple sclerosis has been studied in depth, obtaining promising results.

Although promising therapy, some challenges need to be overcome in order to bring stem cell treatments closer to the clinic. On the one hand, it is urgent to optimize delivery protocols. After intravenous administration, the host's immune system removes stem cells in a short time and greatly reduces the effectiveness of therapy. In addition, a significant percentage of the cells are stored in the pulmonary capillaries, while the rest are expanded in the body. This can cause safety problems.

On the other hand, as already mentioned, the presence of inflammatory mediators is essential for stem cells to inhibit the influence of the immune system. The problem is that in many diseases the degree of these intermediaries is low, so cells do not receive signals to release the bioactive factors that limit immunity. Therefore, the scientific community is currently making a great effort to develop strategies that promote the immunomodulatory capacities of stem cells. Among the alternatives, the stimulation of stem cells with inflammatory intermediaries stands out, that is, inflammatory stimulation. In particular, it has been shown that by stimulating stem cells with interferon gamma (ifn- ?), tumor necrosis factor alpha (tnf-?) or similar inflammatory mediators prior to administration, the release of certain bioactive factors is markedly improved. However, the effect of this stimulation is ephemeral and disappears in the future. Unfortunately this is not enough to treat chronic diseases, so it is essential to find strategies that maintain the long-term regulatory effect of stem cells.

Considering the limitations mentioned, the main objective of the thesis has been the development of a donation system that promotes stem cell retention and long-term therapeutic action. In particular, in this new donation system we have combined two strategies. On the one hand, to ensure cell retention and promote cell viability, we encapsulated them in a hydrogel. A hydrogel is a three-dimensional reticular structure with flexible chains, in our case alginate. Alginate is a natural polymer found in brown algae. Among the advantages offered by alginate are biocompatibility, low toxicity and the ability to form hydrogels under normal conditions. These characteristics are essential for cellular encapsulation technology. Hydrogel alginates can be prepared using several methods of reticulation, but the most commonly used is the ion crossing between polymer chains and divalent cations, which is often performed through calcium (Figure 3). The hydrogels obtained have a high water content and mechanical similarities with soft tissues. In our case, in this three-dimensional network generated by alginate we have included collagen, since the imitation of the natural microenvironment of cells promotes its viability.

Figure . Alginate is a natural polymer found in brown algae. When the polymer chains are crossed with calcium or other similar divalent cations hydrogels are formed. Ed. Ainhoa González

These hydrogels can be applied to more than one place in the body, such as the peritoneal cavity or skin. Once administered, the implant will remain in this position and ensure cellular retention. On the other hand, the hydrogel protects the stem cells from the host's immune system, preventing the entry of immune cells and antibodies. At this point it is important to determine that the polymeric structure of the hydrogel allows the diffusion of the bioactive factors released by the stem cells. In this way, our system allows to maintain encapsulated cells at the given site and sustainably release bioactive factors. In fact, in the preclinical trials that we've done with mice, the hydrogels that encapsulate stem cells have stayed long-term under the skin. In fact, by retrieving the implants 45 days after their placement, we've looked at the cells and found that they're still alive. 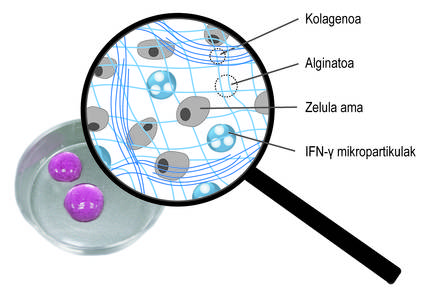 Figure . In this work we have developed donation systems that favor the therapeutic action of stem cells. In particular, the incorporation of a venous oscillo-interferon (ifn-?) in tridimensional alginate-collagen hydrogels, in addition to ensuring the retention of encapsulated stem cells, has allowed to prolong its immunomodulatory action. Ed. Ainhoa González

In addition to three-dimensional encapsulation, we have used a second strategy to promote the therapeutic action of cells. In particular, the idea has been to constantly stimulate stem cells with inflammatory mediators. For this purpose, they have been included in the three-dimensional network of the alginate-collagen hydrogel spherical microparticles loaded with the ifn-{ mediator (Figure 4). Our studies have shown that this combined system maintains a continuous inflammatory microenvironment. Thus, stem cells produce bioactive factors that inhibit the immune system for longer. On the other hand, it has been shown that by growing stem cells encapsulated in these new hydrogels with immune system cells, the effect of these cells is inhibited. This shows how well the system works.

In general, this new donation system that brings together both strategies, besides boosting and prolonging the therapeutic action of cells, guarantees its retention and viability, which may imply important implications in therapies based on these cells. 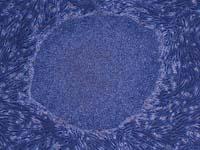