The only problem of the leaders of the Chinese city of Xangai does not seem to be the manifestation of the students. Pollution produces large burukomines. The atmosphere of champagne is so smoking that rain also burns nylon shirts. This magapolis, once known as East Paris, is suffering the consequences of 40 years of abandonment.

Shanghai authorities are considering a $1 billion budget to renew the city's sewer system. Every day, 3.4 million m3 of wastewater is poured from homes and factories into the Suzhon River and the Huangpu River. The Suzhon River is dead and years ago lost the last remnants of life. The situation of the Huangpu River is better. Champagne authorities use the odour index as an indicator of the degree of contamination: The Suzhon stream has been rolled up in 364 days of 365 days and the Hauangpu river has been the same in 165 days.

Shanghai pollution has tripled in the last forty years and today there are 12 million people. However, the sewer system has hardly experienced any innovation.

The project being studied by the Shanghai authorities proposes the construction of a 40 km waste dump tunnel on the Yang-tsen-Kiang River. According to the proponents of the idea, the Yang-tsen-Kiang estuary would be able to collect all these waste.

Water pollution is not the only problem. Air pollution and acoustics also weigh heavily. In 1984, 44 tons/km2 of dust were emitted to Shanghai land as a result of work carried out in the city's more than 8000 factories. 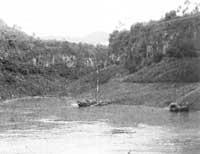