XV. In the 19th century, the proliferation of travel across the Atlantic Ocean required a safety tool in navigation. Nothing was necessary to travel the Mediterranean or the English Channel. Being always close to the coast, for not getting lost in the sea, it was enough to have a map and a wind rose maximum. In the open ocean, however, sea currents, winds or storms could easily divert boats. The maps then had little precision, and the sailors were walking on the high seas. 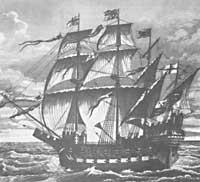 The “stick of Jacob” solved the problem. It was a stick with a cursor that used to measure latitude. By turning the cursor you could measure approximately the horizon and the angle that formed the sun. But how to measure length? This problem was more difficult to solve. But the solution came from the study of Ptolemy's Geography.

However, the first explorers of the Atlantic, XIV. At the beginning of the 20th century they began on the Coasts of Africa. He needed gold, spices and new business routes. As in the Mediterranean there were Ottomans, the Genoese, Venetians and Portuguese sought another way to the Indies. They discovered the Azores Islands, Madeira, Zaire, etc. One of the great drivers of these trips was the Portuguese Enrique Marino.

Christopher Colomb had another project. I thought the Earth was round, I wanted to reach the Indies by the west through the sea. He left with the ships "Pinta", "Niña" and "Santa María", with the Basque sailors, and landed on the island of Guanahaní, in the Caribbean Sea, in the Indies. Colomb has since made three other trips to the West Indies.

Whale fishing in the shields of Euskal Herria.

Italian Americo Vespucci discovered what the West Indies formed the new continent and hence the name of America.

In 1519 Magellan departed west with five ships to reach the Asian Indies. Finally, a single ship returned home under the orders of Getaria Elkano circling the world for the first time.

English and French to North America (Greenland, Canada, etc.) were, as the Basques used to go to whale fishing.

In addition, since the road to America was discovered, the growth of maritime trade was spectacular. This made the Basque shipyards work a lot. Commissioned by Henry V in France, a two-masted ship was built in Baiona in 1418.

In Euskal Herria the "nao" was mainly manufactured. It was a great commercial ship. He had one castle on the bow and one on the stern. On the bow mast and on the main mast I had square candles, but on the mesana the Latin. In the castles the archers and hunters were protected for the defense of the ship.

In the shipyards of Euskal Herria they also manufactured "galleones". The galleon had three masts with square candles that were used to travel to America. It is clear that they were large, fast and well armed ships. The "Santa Ana" made in Pasaia, for example, had 68 cannons.

The ships had to have cannons. In the conquest of the ocean different powers competed and any ship attacked another in the sea. Having to transport more and more cannons, weapons and cargo, they began to build larger vessels. But on the other hand, to escape the aggressors they needed fast boats. They solved the problem differently. The boats made group trips to America. While some ships carried genera, others took refuge even in theft.