With the destruction of the Roman Empire, Goth, Visigoth, Frankish and many peoples of central Europe dispersed death and disaster everywhere. With the passage of time, however, they were calming and assimilating Roman customs, being finally influenced by their civilization. But in the north, a people ran out of swallowing the waves of the empire: Vikings! News News News 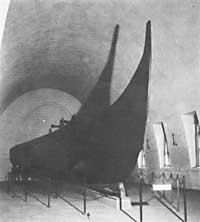 Viking boat that is kept at the Museum of Oslo.

IX. In the nineteenth century there was a strong invasion of the European Atlantic coast. They reached the Paris portal, after dominating Friesland, Rouen, Nantes and other regions. Also Lisbon and Seville. Later, they began to exploit the Mediterranean coast until Constantinopolis. In the same Basque Country, in 859 the Navarrese king Gartzea, son of Eneko Haritza, was kidnapped and freed 70,000 gold coins.

The Vikings, driven by the thirst for sand, reached Iceland and Greenland in the North. They say they reached Canada, and perhaps even further south than the mouth of the Hudson River.

The main headache of the builders was the lightness. Heavy ships were not suitable for those warriors. And it is that the Vikings not only bipiled the coastal towns. They caught their boats in the back and tossed them back on long dirt roads. Thus, walking along the river, they sometimes traveled hundreds of kilometers inland. They did so in the siege of Paris and in the dissolution of Montecassino.

These were the objectives pursued by the sea king of the Vikings of the time, the so-called “skeid”.

The ship itself had a length of about twenty-six or twenty-three meters. It was about five meters wide and a metre and a half high. It was very light, only navigable in summer. That is why in winter they kept the boat on land, covered, well greased and full of water to the center. In front, in bow, it had a mobile bridge covered with fabrics to protect sailors or warriors from the splashes of the waves. It also served to defend itself from its enemies.

In the center was a pine mast, from where a large square candle was hung, a fabric full of vivid colors and strange figures.

The sailors elected the boss by vote and not the family of the former. They said that each one was the king of himself and chose the one they liked most to impose. But once elected, they swore to obey the new boss and followed him honestly. However, if the authority demonstrated incompetence in their work, the subordinates abandoned it and chose another new superior.

When the chief died, the ship was considered a tomb. Were there more adequate graves than water? The skeid, which had made several marches, then became a coffin. After lifting the wooden shawl in the center, the body of the boss was deposited. Then he was given land on the beach with his boats, which in summer was so far away and for the winter was loaded with gold, slave and food.

The Vikings had great problems navigating the Atlantic. On the one hand there was fear of storms in the sea and to go to any place had to take good advantage of the winds. In summer, pushed by the eastern winds, they reached Icellanda and Groenladia.

When they wanted to sail south, they took advantage of the western winds. Therefore, many believe that the Vikings arrived in America before Columbus. Norwegian Seif Eriksson saw by chance a territory in the West and returned to those areas, after spending the winter there, he returned home with grapes. That is why they called the Land of Wine to the territory believed to be Newfoundland today.

But from the time of the Vikings, they began to use an invention that would drive blind navigation: the compass. Until then they sailed through the sea intuitively, observing, remembering and discovering the coasts. In the tenth century, however, thanks to the compass solved the problem of orientation.

In fact, the compass, invented by the Chinese at the time of Christ. However, until the tenth century it does not appear in Europe. At first, in a cup full of water, the magnetic needle was placed floating inside a straw. Georago, XII. At the beginning of the twentieth century the magnetic needle revolved on an axis and thus improved the compass which became an essential tool for guidance. And it is that this pin always looked at the witchcraft or the north pole of the Earth.