With cutting-edge technologies, current science has made great strides in both radioastronomy and high-energy physics (fraction accelerators). For several years, the macroscopic and microscopic limits of matter have been greatly extended and the limits of current physics must be revised and reinterpreted. Despite the numerous problems that have arisen, Physics has managed to adapt a theoretical building coerent between the greater known distances (2x10 5 years of wider galaxies) and the smaller ones (10 -33 cm of Planck). And to describe any phenomenon of Nature today we only need four basic forces: Strong nuclear, weak nuclear, electromagnetic and gravitational. (1) 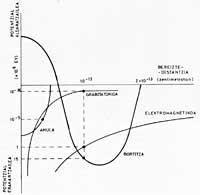 Weak and violent nuclear force are short-time forces, as their influence manifests itself at very small distances. Its effect disappears quickly if the distance increases. Such forces are concentrated in the world of atomic nuclei. Overcoming the diameter of the core, these forces disappear for practical purposes. The nucleus formed by nuclear forces is very small and to study the phenomena that occur within us we need quantum physics. In this underworld, so far removed from everyday experience, Heisenberg's laws of indetermination prevail.

The field controlled by electromagnetic force is in the transition zone. In this area there are numerous different phenomena, highlighting chemical reactions. Moreover, the compound complexes necessary to create the kind of life we know in daily experience only occur in the field of electromagnetic force. Therefore life has been defined at some point as formed electromagnetic energy. This important force to properly understand the world of the average dimensions begins to lose importance when space-scale distances are increasing, and in interstellar and intergalactic zones their influence disappears.

The relationship between matter and time-space geometry of the universe was first explained by Einstein. In the image Einstein teaches the physics seminar.

At the macroscopic level, that important force of background that is the only force that appears in its entirety, begins to lose importance when space-scale distances are increasing, and in interstellar and intergalactic zones its influence disappears.

At the macrocosm level, the only force that predominates in its totality is that of gravitation. This force builds the structure of the astronomical universe of planets, stars, galaxies, galaxy sets. The phenomena of this scale depend on the laws of relativity, more specifically on general relativity.

Before building physics, Newton's mechanics postulates a concrete environment in which the bodies of matter move. The preconfigured frame is related to absolute space and time. Without it there is no measure or physics. The interaction between the medium and the bodies of matter cannot exist, that is, the container is independent of the content.

Einstein, in the theory of general relativity, unites the space and time of that framework, thus linking the first independent categories. In a second step, this time-space reference system considers it the only physical reality of the Universe.

This new reality, which will no longer be a slow framework, but an entrepreneurial framework, through which we must understand all the phenomena that appear in Nature. The spatial/temporal line will be defined by a metric whose shape corresponds to the four-dimensional variety of Riemann. Any point of the line will be defined by three spatial coordinates, the fourth time being

According to the latest astronomical discoveries, this spatial/temporal metric is dynamic and is expanding through the original impulse of the Big Bang. As a result of De Sitter's work we know that the deployment of this metric is compatible with Einstein's field equations. In the Universe thus defined, the space/temporal line presents a curvature that is variable with the expansion of the Universe.

So things, where can matter be found in Newton's spatial and temporal framework? In the theory of general relativity, matter remains an active part, but in an ontological status similar to that of the space/temporal line.

Matter, defined by variety, will be described as a local irregularity of the space/temporal line. Therefore, it is an area with great curvature of the non-euclidean line.

A black hole simulated by a computer. Quantum gravitation predominates in these black holes.

If we add medium curvature to the entire cosmos, in a short interval of that Cosmo (for example, interplanetary) this curvature can be avoided. The same reason is even more valid if we work on an atomic or subatomic scale. At this point there is an obvious contradiction, since, according to general relativity, matter will be the deformation of the space/temporal line V 4, so at the atomic level, the materiality of the atom must be the result of the deformation of the line, contrary to the aforementioned.

This ghost has been behind relativity since its birth, and the only possible solution is to extend the relativistic geometry of the macrocosm to the microcosm. From this point of departure there are precisely attempts to obtain theories about converging fields of Einstein, Kaluza, Weyl, Eddington or Schrodinger.

According to general relativity, matter transforms space time. In the image, the deformation of a two-dimensional continuum is due to a high-density mass.

Faced with this situation, a question immediately comes to us. What will happen below 10 - 14 cm? Would it be possible to detect such supersmall distances? In this case, what would be the forces acting on these dimensions? How can the unity of all forces be raised?

Current physicists, for various reasons, consider that the force that predominates in these supershort distances is that of gravitation. But what distance do we mean? How to choose a distance as a reference for all physical phenomena?

That important distance for reference exists in Physics and was published around 1899. At this distance we call you distance from Planck.

Reduced relativity, general relativity and quantum mechanics are three theories that correspond to each of them a fundamental constant. Thus

With these three constants we have a single possibility of reaching a basic length that is obtained between 2.10 and 33 cm.

This length would be the quantum of length, that is, the least distance that can be obtained with physical sense. 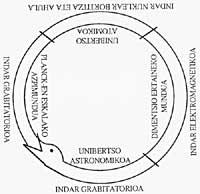 Here there is a great physical obstacle. Experimental physics cannot access this small subworld. Remember that Planck's length is 100 times smaller than the neutron radius dimension. To access these depths of distance we would need an accelerator of fractions the size of our galaxy.

Anyway, we do not have everything lost, because where experimental physics does not arrive, theoretical physics can arrive. And precisely on this path all efforts are being concentrated to obtain a theory of the common field.

As mentioned above, physicists believe that the force that dominates these supersmall distances is that of gravitation. Nobel laureate Sheldon Glashow described this situation in a special way. For him, he invented the image of a snake biting the tail to explain the forces of Nature and the corresponding fields of action. According to this, Planck's scale physics would close a circle (as the snake does by tying the tail with its mouth), in which macrocosmic and microcosmic distances would depend on gravitation.

The Andromeda, a galaxy close to our galaxy. Gravity predominates in these dimensions.

In this sense, to properly round and consolidate current physics, the phenomena of the Planck scale must join gravitation, and to carry out any study in these microscopic dimensions we need quantum mechanics. For this reason, in recent years a new branch of physics has been powerfully created: Quantum gravitation.

While writing this article, the discovery of the fifth force has spread. This fifth force would also be gravitational. Until we have more data and contrasts we will not mention this new force. However, the essence of the article remains useful in its entirety. Remember what is indicated in (1) note.