A Purple Moment in the History of Chemistry

There are many ways to read the story of William Henry Perkin. It is the story of a discovery that surprisingly discovered a purple dye. From the business point of view, it was a dream come true; from the historical point of view, the democratization of an exponent of luxury; from the chemical point of view, the model of the potential of the production of synthetic molecules. In short, a surprising story.
A Purple Moment in the History of Chemistry
01/04/2009 | Roa Zubia, Guillermo | Elhuyar Zientzia Komunikazioa 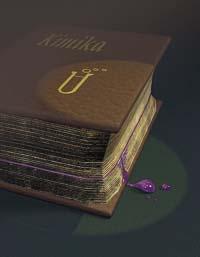 Purple is found within this wide area between red and blue, in the area of colors such as purple, lilac, ubela, violet. It has special importance in the history of dyes, since until 1856 the purple dye was very scarce and thereafter the synthetic dye opened many doors.

The protagonist of this story was the English chemist William Henry Perkin. He discovered the purple tint and that extraordinary event changed his life. His discovery took place at age 18. Very young. In fact, he worked in the laboratory of chemist August Wilhelm von Hofmann at Imperial College London. The discovery took place at Easter 1856, a few days in the Hofmann laboratory. That same year it registered the patent of the dye and from that moment began the business activity.

With his father's money and his brother's help they set up a factory. Perkin himself developed a fixator (a substance that held the colored molecule) and threw the dye. They did not create a new color, but the name of a color: they called it mallow, and with that name conquered the market the dye.

At that time there was another purple dye, the purple of Tyre, but it was expensive and difficult to produce. The perpendicular forces realized that the market gave them a great opportunity; being in England, XIX. In the middle of the 20th century they were immersed in full industrial revolution and the textile industry was experiencing a great boom. An unbeatable opportunity; Perkin became deeply enriched. 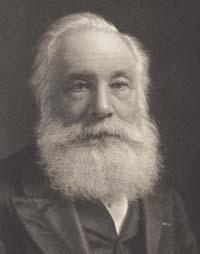 It was a real discovery of the history of chemistry, with all the meaning that the word discover has. I wanted to get a synthetic quinine and fortunately I didn't know much about organic chemistry.

Neither Perkin nor anyone else, since in 1856 organic chemistry was not developed enough to synthesize a molecule like quinine. The chemists of the time did not know much about the chemistry of carbon and, moreover, did not know what was the molecular structure of quinine. All they knew was how many atoms each type of molecule had. Quinine is composed of 20 carbon atoms, 24 hydrogen atoms, two nitrogen atoms and 2 oxygen atoms (C 20 H 24 N 2 O 2). But these atoms have thousands of molecules.

They searched blindly, by intuition they mixed liquids similar to quinine to see what came out. Hofmann had proposed a method of quinine synthesis from which Perkin was testing. And in those conditions he synthesized the purple dye without knowing with which molecule he worked. And that ignorance brought him happiness; if he knew the structure of quinine he would never have synthesized the dye.

The purple dye molecule was called a suitcase. It is also called purple aniline because it is a derivative of aniline. Perkin oxidized the aniline with the chromic acid, but, in addition to reacting with it, reacted with impurities of the aniline itself, with some toluidins and appeared a solid black residue. This type of waste is common in the chemical world. They are usually separated and discarded, but Perkin wanted to take the residue and see what it was made of. The residue was introduced into alcohol and from this black solid a purple product is extracted. Aniline was purple, a molecule foreign to quinine. Sold this molecule as a dye, at twenty-one, it was enriched in Perkin.

In addition, the fame of the dye was great. In 1862, in an English exhibition, Queen Victoria appears dressed in a silk dress. The mauve was fashionable.

But it wasn't just a dye of clothes. Microbiology was also gaining strength in the 19th century. in the second half of the 20th century. And dyes were important resources for microorganism research. Cells were stained from some bacteria and others did not, and some components of some cells did and some did not. Therefore, biologists needed many dyes. 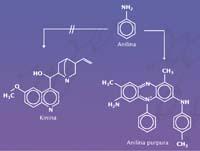 Perkin's dye opened that path. The Danish biologist Christian Gram, for example, developed a technique of staining bacteria using other dyes of the aniline family, and other biologists applied it to classify bacteria; today it is common to classify gram-positive and gram-negative bacteria.

Basic ideas were also lacking; the German chemist Friedrich Kekule proposed in 1857 that the carbon atom produces four covalent bonds the year after Perkin's discovery. The structure of benzene was not known either, that is, the chemists did not know that the six carbon groups were ring shaped. It was Kekule himself who supposedly proposed it, after seeing the coal dancing in dreams. Annular structures are typical because in many molecules they are small energy structures.

Organic chemistry is similar to a mecano, the parts are atoms and the joints between them must be made according to certain rules. Known to these standards, current chemists can synthesize in the laboratory virtually any organic molecule, natural or not. XIX. In the mid-20th century, that chemistry was a trial error, but at the end of the century the situation was different. 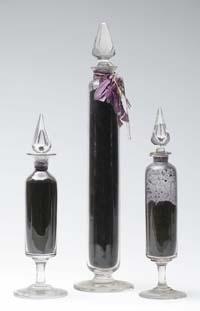 Dye purity samples made by the perkin himself. Miss Annie Florence Perkin gave these samples to the London Science Museum in 1947.
Science Museum

Perkin, not lacking money, worked simultaneously in the dye industry business and in organic synthesis research. When Alizarina learned about red synthetic dye, she began to refine the synthesis method to maintain the monopoly of dyes. However, BASF registered the Alice's patent one day before Perkin.

In 1874 he sold the factory, abandoned the dyes and devoted himself exclusively to research. By then, competition in the chemical industry was very hard. German companies acquired great strength and were completely imposed at the end of the century.

Perkin devoted himself to research in organic chemistry and, thereafter, continued to reap great successes; a well-known reaction bears his name: Perquinas reaction. That's why he also remembers the history of chemistry. The creator of synthetic purple died rich in 1904.

Purple Luxury
In Roman times, purple was very expensive. They made it representative of luxury, only Caesar and the senators had permission to dress in that color. In any case, it was very expensive, as the Phoenicians brought from far away from the city of Tyre. In addition, the process of obtaining the dye was very complicated and laborious. It was extracted from the mucus of a mollusk, from the sea snail Murex brandaris, which was going to crush thousands of snails to get the dye of a few kilograms.
The molecule that gives color to purple shot was identified in 1909 by the German Paul Friedländer. Too late from the market point of view; five decades after Perkin's purple aniline. This molecule, 6.6-dibromoindigo, was synthesized three years earlier, but was never marketed by the dye industry.
Roa Bridge, Guillermo
Services
252
2009
Security
033
History
Article
Services 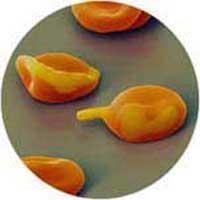