A tour of the carbon plain

Graphite atoms are arranged in planes. Scientists have known this for a long time. And they have long thought that with these planes of atoms individually a new material could be obtained with different properties than those of graphite. This was done four years ago, extracting to graphite the atomic planes and obtaining a new material: graphene. The properties of the new material are different from those of the rest, and it is the hardest, thinnest and most surprising semiconductor material we know.
A tour of the carbon plain
01/01/2009 | Roa Zubia, Guillermo | Elhuyar Zientzia Komunikazioa 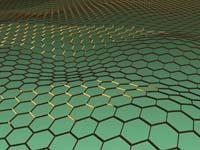 Graphite is used to harm arches. In fact, the pencil leaves a black line on the paper, as it releases small fragments of the graphite along with other components. These parts are not complete fragments of graphite, but groups of atomic planes. This is because the bond between the carbon atoms present on the same plane is very strong, while the bond between planes is very weak.

It is not possible to separate one of these planes with a pencil, but if one could divide the result would be graphene, one of the stars of science of the current materials. Andre Geim and Philip Kim were the American physicists at Columbia University who first isolated in 2004. In fact, physicists took advantage of the pencil idea. And they continue to take advantage of this idea.

Something similar is done; instead of passing the pencil over the paper, they rub a piece of microscopic graphite against a silicon sheet. This also does not release a single plane of carbon atoms, but a fraction of approximately 100 planes thick. From that moment on they use adhesive tape. Paste on both faces a small slice which they got and pull by hand. Doing this over and over, they end up getting fragments from a single plane. Obtaining graphene. It is not a very technological process. Columbia University has paid $10 for this work to a fellow.

By isolating a single plane, physicists dazzle. The atoms of this plane should no longer share electrons with atoms of another plane, which radically changes the situation. In the state formed by two planes, some electrons moved freely through the groove between the two planes, but not very quickly. The electric current was easily generated, but with some resistance. In the state of a single plane, on the contrary, electrons move quickly on the plane – and below –, practically without obstacles.

They move much faster than in a metal. Some physicists claim that they move 400 times more slowly than the speed of light; if that is true, the speed is very fast, remarkable for the effect of relativity. Although the data is not accurate, they are very fast electrons. 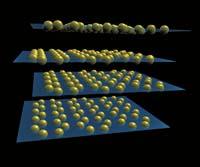 In the graphite structure, atoms are sorted by planes. Each of these planes is graphene.
G. Roa

This suggests that graphene is a great electric conductor as a metal. The truth is that in some cases it can behave like a metal, but in general it is a semiconductor and very good semiconductor.

Explained very simply, in a material, the lower the temperature, the less the nuclei of atoms vibrate. And there are fewer obstacles to moving electrons, the electric current. Drivers therefore drive better cold electricity than if they are heated. However, in graphene there are hardly any differences and it has the same electrical properties as in cold at room temperature.

In addition, its dimensions are very small (thickness of an atom, length and width of as many atoms as desired), which seems an appropriate material for the development of nanoscopic transistors. Many experts consider that at some point it has many possibilities of being a substitute for silicon.

It has other special electrical properties. For example, they often highlight the quantum effect Hall, which appears in graphene at room temperature and not in other materials. This effect is related to the interaction between material and magnetic fields and may have relevance in electronic graphene applications.

Of course, graphene will be useful in the microelectronics industry if, among other things, a serial manufacturing technique is invented. The adhesive tape method is useful for the needs of a research laboratory, but not for obtaining large quantities.

One of the components of pencil pain is graphite. When writing the parts of this graphite are released and remain on paper. They are fragments of thousands of atomic planes. If we write with a pencil on a nanoscopic scale, perhaps the planes would be released individually, that is, graphene would be released.
G. Roa

There are several proposals for mass production of graphene. Recently, for example, experts from UCLA University of California have developed a technique. The idea is simple: oxidize the graphite and then reduce it. Apparently it is two opposite chemical reactions, so the logic indicates that once produced both would recover the initial graphite. That's not the case. Oxidation consists in the insertion of oxygen atoms between graphite planes and the release of graphene sheets after their reduction. According to the researchers, what is achieved is a graphene of very high conductivity.

Another advantage of this technique is that the oxidized graphene resulting from the first reaction has very interesting properties since its electrical behavior depends on the amount of oxygen received by the material. In short, in addition to graphene, graphene derivatives are novel materials of interest.

The hardest in the world

Electrical conductivity is not the only property that physicists seek. In addition, another thousand features are required to a new material. And also from this point of view, graphene is a unique material.

It is the hardest material in the world, harder than the diamond itself. In fact, at Columbia University, where he paid fellows for manual graphene extraction, they measured the hardness of graphene and had to use the diamond itself. A hole on a silicon surface is covered by a perfect graphene molecule. And that perfect molecule is pushed with a very sharp diamond tip, from top to bottom, until graphene breaks.

The researchers explained the outcome of the experiment by comparison. Imagine that the silicon surface hole is like a cup of coffee. It is covered with a plastic and tried to pierce with a cutting pencil. The objective of the experiment is to measure the force needed to drill the plastic. The replacement of plastic by graphene, despite the weight of a car on the pencil, would not lead to the distortion of it.

In addition to resistant, fine and excellent electric conductor, graphene conducts heat very well. This was suspicious from the beginning, since nanotubes also transmit heat very well and, ultimately, it is the same material. However, it has been very difficult to measure, as it is not easy to contact graphene sheets with a heater. Finally, some physicists at the University of California-Riverside have managed to heat graphene with a laser and have measured a surprising conductivity, 50% higher than nanotubes and 10 times higher than copper and other metals.

On the other hand, it has the appropriate optical properties for the realization of liquid crystal screens, for example. Two graphene sheets can be used to interlace another material and make a liquid crystal. As graphene has a thickness of a single atom, very fine screens can be built.

There are many things that can be done with graphene (especially if, as we said, they manage to make it in series). But all these applications have not yet been developed. And so the new world of graphene is just a dream. But it has only been four years since the team of physicist Geim first isolated graphene. It will take time to demonstrate the actual capabilities of graphene.

The atomic structure of coal is graphite, that is, a large accumulation of graphene sheets. In fact, coal fouls the plates by its ease of release.
Archive; R. Gefangenen

However, scientists are willing to test new applications. And not just physical, one of the most surprising examples is reading the sequence of the DNA molecule. It is about passing the DNA chain through a groove between two graphene sheets and generating an electric current in graphene. The electric current jumps to the DNA bases through a tunnel effect, but each base needs a certain amount of energy to produce this tunnel effect.

This means that depending on the energy needed by graphene to jump the stream of a sheet to the DNA molecule and from there to the second sheet, the next base of graphene can be known. With this method, and moving the DNA molecule into the slot, you can know the sequence of DNA bases. And, according to experts, the use of graphene allows reading sequences faster than other methods.

Ideas for possible applications are rapidly multiplying. That's why physicists believe that graphene is going to be a revolution. And the best thing is that it is not a new material, it was there, hidden in the graphite. Only the extraction was missing. And now we have plucked out the graphene. See what we do from now on.

Great hope, graphene
From time to time, the discovery of a new, impressive, revolutionary material shakes the world of researchers. As soon as the fever passes, practical reality shows us, unfortunately, that the applications of the material are scarce. Superconducting oxides, fulgurants and carbon nanotubes have passed ahead of us. Revolutions become revolts. Applications, materials that still captivate us. 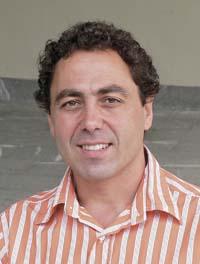 Enrique Ortega. Physical DIPC
R. Ortega
Now we have the turn of graphene. Although we have let other wonderful materials escape, we will give graphene an opportunity in our Nanophysics laboratory. For us, for the experimental, walking flowers does not give good results. Each material needs an appropriate environment, an experimental approach of its own. And that doesn't change from day to day: it takes time and money (a lot! ). Fortunately, graphene has caught us with all the means to maintain competitive research: graphene is composed of fine foils, can be obtained in situ (in vacuum) and electronic characteristics are, in short, the key to the physical behavior of graphene. We are willing to investigate the electronic characteristics of a fine print of graphene. See what we find!
Roa Bridge, Guillermo
Services
249
2009
1.
034
Materials
Article
Services 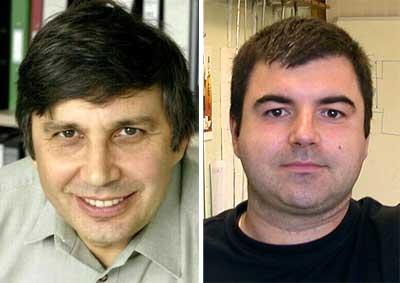