Most interhuman organ transplants are rare by doctors, as failures are frequent. However, some cases, such as kidney transplantation, have become a daily job in many hospitals. The basis of rejection lies not in the surgical complexity of transplants (current techniques are very advanced and precise), but in the Adaptive Immune System.

This conclusion is reached by a series of data.

On the one hand, transplant rejection is not surgical, since improvements in surgical techniques have not coincided with the success rate (it is still relatively low).

On the other hand, rejection is immune because it meets the characteristics of Adaptive Immunity: memory and specificity.

It is understood as immunological memory, in which the recipient rejects the second vaccine taken from the same donor as the first one faster and more vigorously (Figure 1). 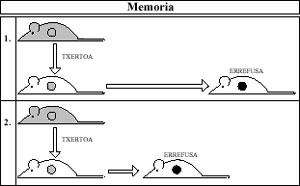 The Immune System recalls the first contact with the vaccine and in the second the mechanisms are willing to act more violently against rejection.

The specificity is that the second rejection is faster and more alive against vaccines received from the same donor, but not against those received from any other donor (Figure 2). 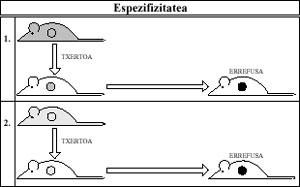 When the Immune System comes into contact with a vaccine (antigen), only this specific vaccine is sensitized.

Other data attribute the ability to reject to the Immune System. For example, when immune cells do not reach certain organs and/or tissues of the body (eye, bone, cartilage), these tissues can be inserted without any problems, since rejection is rare.

In general, the rejection of the vaccine is that the recipient's immune system is able to see the vaccine cells strangely and then proceed to the attack. Then the inserted tissue dies, that is, it is rejected.

The receptor is able to see the vaccine cells strangely through various molecules that contain them on its surface. These molecules are called histocompatibility antigens.

They are antigens because they are able to produce an immune response like any other antigen. They are also histoconjugation, as they intervene in the phenomena of vaccine acceptance (conjugation) or rejection (inconjugation).

These compounds are of two types (class I and class II) and different, both in their morphology and in their function.

Biochemically we have glycoproteins anchored to the cell membrane. Class I molecules consist of two pepid chains of different weight. On the contrary, class II molecules are formed by two similar weight pepitory chains. These contain three carbohydrates.

Despite playing a very important role in transplant rejection, the original function of HLA antigens is not, logically, this, since in Nature there is no transplant. Its real function is to be a target for the Immune System. 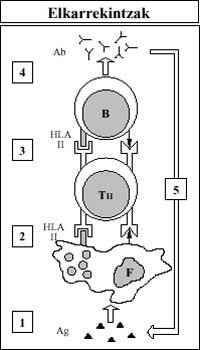 And on average, they see vaccine cells strange because they see their HLA antigens strange.

These antigens intervene in functions of great importance such as (1) the interactions between cells of the Immune System, (2) the elimination of foreign cells and (3) the destruction of self-paved or altered cells.

When a foreign substance (Ag) enters the body, the cells of the Immune System are known by the HLA-II antigens, giving a coordinated response to this substance. The phagocyte (F) assumes the foreign antigen and presents it along with its cutaneous antigen HLA-II to the T Lymphocyte Helper (T H). Assistant T then induces lymphocyte B (B) by knowing the same antigens present in the membrane of this last cell (foreign and HLA-II). Finally, B lymphocyte produces antibodies (Ab) that grab the foreign antigen and remove it. (Figure 4).

Also, immune cells (specifically cytotoxic T lymphocytes), with the help of HLA-I antigens, see lorrin to their own paved cells (viral infection) or altered cells (cancer). It is then removed (Figure 5). 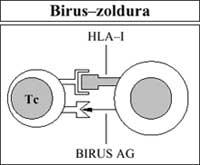 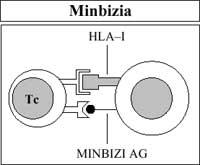 While the first two functions are natural, that is, since man was created they sit, this third is totally artificial, since transplants have only been performed in the last century. Later this last point appears, which is one of the keys of the article.

Like all proteins, HLA antigens are encoded by a bundle of genes (HLA genes). These genes are found in a small part of human chromosome 6, in the so-called Main Complex Histocompatibility.

This area consists of five sub-areas. Three of them encode the antigens -A, B and Ck-HLA-I. The fourth codifies the -D-HLA-II antigens. For its part, the intermediate subfocus codifies some soluble factors other than HLA antigens but related to the immune response (Figure 7).

HLA genes are very polymorphic, that is, each has different alleles. The combination of all these alleles results in a large number of genetic compositions.

Therefore, each has a special genetic composition, different from that of other human beings, including their relatives (except the homozygous twin).

This makes every human being a different and different combination of HLA antigens. And this characteristic is the cause of vaccination rejection among different human beings, both abundant and twin. Between these two shores there is a great separation. In this period, greater parity between the donor and the recipient, higher rate of vaccine acceptance. And vice versa.

As can be deduced from the above, autotransplants (i.e., when the donor and recipient are the same man) are a total success, since the Immune System of Man considers and accepts as its own the inserted tissue (Figure 8).

Self-growths are used, for example, in patients who have suffered large skin burns. In these cases, burned areas of the body are covered with skin grafts removed from healthy areas.

The Immune System has two branches: congenital and non-specific and adaptive or specific. Both branches are made up of cells and soluble factors.

The first, as the name suggests, is excited from birth and plays against any type of Ag.

The second, on the other hand, develops as the Immune System comes into contact with foreign molecules (Ag) throughout human life, and is only opposed to such molecules (table).

As already mentioned, the cause of transplant rejection is the Adaptive Immune System of the receptor, with humoral (B lymphocytes) and cellular (T lymphocytes) branches.

B lymphocytes are antibody-producing cells (Ab). Antibodies are proteins that can bind to foreign molecules (Ag) that originated their production (Figure 9).

In this way they can produce different types of immune response in blood, lymphatic systems and mucous membranes of the body.

However, they do not fulfill large obligations in the first vaccination rejection, although they are important in the second (if it occurs). This is because, after first contact with the strange vaccine, B lymphocytes take several days to produce antibodies, and when they produce them, the vaccine has already been rejected by T lymphocytes, which act much faster.

However, in the second vaccine received from the same donor (if collected, of course), B lymphocytes have prepared their antibody production mechanisms and attack the vaccine more quickly (remember Figure 1). However, vaccines with the same donor are rarely performed, so the role of B lymphocytes in transplants is very small.

T lymphocytes, on the other hand, are the main causes of vaccination rejection. These cells are distributed in five populations, each with a specific function. 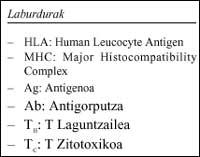 In the rejection of transplants, the affected populations are two: Auxiliary T lymphocytes (TH) and cytotoxic T (CT). T assistants have a receptor on the membrane to recognize HLA-II class antigens (see Figure 4). Cytotoxic T, on the other hand, will recognize the antigens of class HLA-I (see figure 5).

The transplant rejection mechanism is as follows:

cytosis: Cytotoxic T, on the other hand, come into contact with vaccine cells (this time through HLA-I antigens) and perform a cytotoxicity or cytosis action against them (Figure 10).

This causes the death of vaccine cells, which are rejected.

Therefore, when transplantation is rejected, this natural mechanism, created by itself to destroy paved or altered own cells (mechanism formed by HLA Ag and T lymphocytes), does not meet its original obligation (Figure 5) but rather an artificial function (transplants are artificial) (Figure 6).

How to avoid rejection 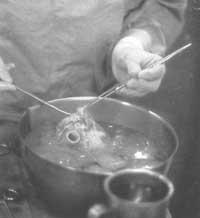 In the heart transplant the heart enters water/ice to prepare it.

As already mentioned, there is a direct relationship between the number of nonconformities and the percentage of rejection, that is, when one raises the other and vice versa.

Although alleles are very variable and therefore human genotypes are different, one way to avoid the risk of rejection is to find a donor with the HLA genotype as similar as possible to the receptor.

For this purpose various tests are used, among which the Textile Typing stands out.

Textile Typing determines the HLA specificities of several donors, selecting the most compactful with the recipient.

Although this technique is applicable to the recipient's family, it is not the same to apply it to donors who are not related to it because of some drawbacks.

Unfortunately, despite the most attentive Textile Typing, there is always some disagreement. Therefore, most of the time doctors should resort to Immunosuppression.

Immunosuppression, that is, suppression of the Immune System of the receptor, can be achieved by several methods. These include irradiation, antimitotic drugs, and serum or antilymphocytic serum.

The irradiation of the receptor lymphoid tissue removes the cells that perform the cytolytic action, thereby decreasing the force of rejection.

Antimitotic drugs prevent the lymphocyte proliferation of the receptor, eliminating the cellular immune response against donor antigens. The most commonly used drugs are cyclosporine A, acathioprine and cyclophosphamide.

Today they are antibodies against the recipient's DTT. This blocks T cells and reduces the rejection capacity.

Although there are many ways to avoid or reduce rejection, none is complete and worse, all have inconvenience

Therefore, the complete solution to combat transplant rejection is still far away. The achievements that will be detected in the future in this matter seem to have been achieved closely with the advances of Immunology. 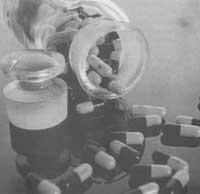