In the society in which we are, telecommunications will be of great importance. Although the phone will be the main communication tool, in the transmission of data by radio and television will be handled images, data, texts and graphics. Among the technical objectives is to convert all signals into digital. This is known as the Digital Integrated Services Network (ISDN). The only factor that will limit the speed of digital data transmission will be the user line, that is, the double copper cable. However, ISDN will also improve the quality of available services and transmission. But they will be two elements, satellites and fiber optics that will revolutionize telecommunications. 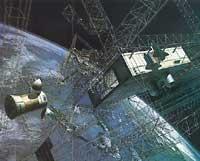 Most satellites that orbit around Earth are telecommunications satellites.

Telecommunications satellites for the realization of international works were first spaced in the 1960s, immediately forming a network called Intelsat, which covers the entire Earth. In Europe, in 1977 the Eutelsat consortium was created to facilitate satellite communications across the continent and currently has 26 members.

While some of the four Eutelsat I satellites launched spatially between 1983 and 1988 are in continuous operation, others are in reserve or rented for television services. The second generation of satellites (Eutelsat II) is composed of four units that will be launched in the decade in which we are. The information traffic that Eutelsat will support will be corresponding to 23,000 telephone channels. France, on its own, launched between 1984 and 1988 three Telecom satellites covering almost all of Europe. 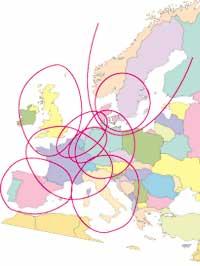 The influence of satellites operating in the sky of Europe does not at all conform to national borders and it is essential to resort to common international standards.

Progress is made on satellite research, cost reduction and the dissemination of communication capacity. Antennas that are very orientative to achieve these two objectives are of great importance. The best thing for TV broadcasts would be that the area to which the service is intended was a single antenna, but the area occupied by satellites does not coincide much less with national borders. The development of more sensitive receptors will increase coverage surfaces. Therefore, we are at the gates of the European television service.

Two telecommunication satellite projects have been developed in a common project between Germany and France: TV-Sat and TDF-1. The Olympus satellite of the European Space Agency also includes a television broadcast module. 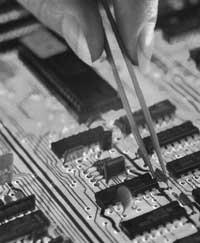 In the telecommunications revolution, along with satellites and optical fibers, more powerful computers will be needed.

Unfortunately, rain hinders the propagation of frequencies greater than 10 GHz and increases as the frequency increases. Large storms are very harmful and Europe has paid special attention to research in this field. The Italian satellite Sirius, launched into space in August 1977, has carried out tests of expansion and communication in frequencies between 11 and 18 GHz.

The probability of heavy storms is very variable throughout Europe. Theoretically, avoiding interruption of communications can be achieved using more powerful transmitters, but these are expensive and engineers must work the balance between power and interruption of transmissions. If the number of interruptions in the worst of the countries analyzed by Sirius at stormy level in Italy is to be less than 50 min/year, at 12 GHz the power must be multiplied by 17 compared to the day of the sky. Although this number is acceptable, to achieve the same level of reliability at 20 GHz, the power should be 700 times higher and at 30 GHz 170,000 times higher. If the number of interruptions is 9 hours/year, the power multiplier factor at 30 GHz will be only 21.

Therefore, the new European satellites, in addition to offering specific services, can be considered test laboratories.

Optical fibres and satellites are primarily responsible for the changes taking place in the telecommunications sector. The area of silica fibers used in optical transmission has a refractive index higher than that of the coating. 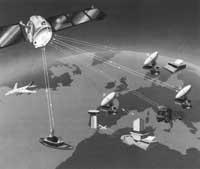 The project called PROSAT aims to achieve communications between fixed and mobile objects.

Some fibers based on zirconium fluoride, in large intra-infrared wavelengths, have a very low degree of attenuation. Therefore, it would be possible to install cables between the submarine continents without signal repeaters.

Europe has been very efficient in optical transmission testing. The first investigations began in 1977 and were carried out in the UK, Italy and Germany. Consequently, by 1988 in France it had installed 500,000 kilometers of fiber optics, something more in Germany, 200,000 kilometers in Italy and 800,000 in the United Kingdom. Optical systems have been very suitable for long or long distances and the replacement of copper telephone cables, both in homes and offices, will cause major changes in telecommunications networks. This way you will get a wide range ISDN. This new road in Europe is known as IBC, that is, Integrated Communication at Wide Distance.

From the creation of the first phone to the present day barely 120 years have passed, but the changes have been spectacular.

While companies will be interested in the aforementioned services, the drivers of the services will be cable television or TV programming eligible. The first tests have already been conducted in the UK, France, Germany, Switzerland and Italy.

In 1986, the EVE started the RACE programme in the IBC field. The objectives of this program are the creation of prototypes for the year 1990 and the development of commercial systems for the year 1995. The areas of work are fiber optic transmission, digital transmission and switching and close and wide distance services for businesses and individuals.

However, the role of fiber optic cables and satellites are not alternative but complementary. A satellite, for example, is visible for an antenna located in closed or hilly areas. The satellite system is very flexible to communicate with other places, redistribute communication capacity or emergencies. Wide-range digital telecommunications networks can be built earlier with satellites rather than fibres, provided that small stations close to the user are economical.

Satellite broadcasting is the first step in this field. When the IBC is operational, users outside the “optical islands” will receive programs directly and residents in the optical islands will be collected at service centers and mixed with other programs. Therefore, satellite broadcasting and fiber optic television must be thought and programmed in an integrated way. It can be a good opportunity to create new rules on HD TVs.

Through the Newton product that just launched APPLE, the computer, phone and fax come together forming a comprehensive service.

In the case of mobile communications, when distances are not very large, radio offers the best options. On the contrary, satellites are the most suitable for mobile communications over long distances. European phone companies are looking for a unified system at a frequency of 900 MHz. If this is achieved, each user will have a single communication team, even if they are in another state.

Finally, it should be noted that to be able to carry out the great technological advances theoretically require high-tech industries and greater coordination among States. 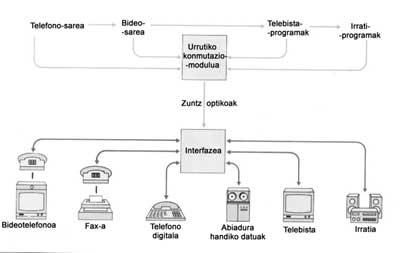 The following scheme presents an example of integrated service with fiber optics.