The situation created by the COVID-19 pandemic is very particular from all points of view. For scientists, psychologists, sociologists and many people it has been an unexpected experiment. Or at least a situation conducive to carrying out an experiment. This is not a state designed and previously controlled. In reality, in the approach of the scientific method, the scientist is expected to leave a hypothesis and design an experiment based on which is the path of the canonical scientific method. But science is often like life itself: we have not been able to plan and create this situation, but have had to accept it as it has come. Also the scientists. 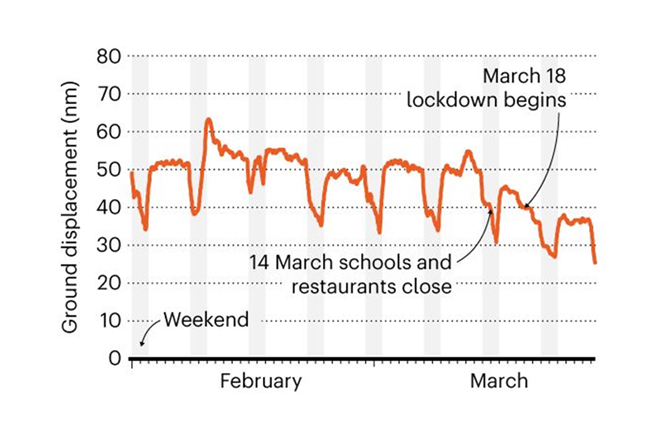 For example, we're talking a lot about ecology. The fact that these people do not go out into the street causes changes in the behavior of many animal species to be observed. But what do geologists say? And among them, what do seismologists say? Those who measure the earthquakes and vibrations of the Earth. Because they have also detected this special situation in seismographs.

The first was a Belgian seismologist at the Royal Observatory of Belgium. The city of Brussels does not vibrate as usual. Since mid-March, it is observed in the charts that the seismic vibrations measured in Brussels have reduced at least 30% of the background vibrations, which is called background noise. minimum 30%. The seismologist says they have sometimes measured a 50% reduction.

It is logical. The roads have decreased dramatically, many streets are empty with very few vehicles. Pedestrians have also disappeared from the cities, because we do telework, because we are not going to buy, because the schools are closed, etc. In the end, all this causes a small buzz that seismographers collect as a background signal. It also happens at Christmas, say the seismologists. In the signal measured in Brussels, at least, it is so.

But all this has had an interesting conclusion: they have been able to detect very small earthquakes, which are those that cover the buzz of the city. For this reason, the stations of the seismologists are outside the cities to escape vibrations caused by man. But that means that, for example, the small seismic movements that occur in Brussels cannot be monitored. Now yes. Similar phenomena have begun to be detected in other cities. For example, in London or in Los Angeles.

If citizens comply with the rules of confinement, seismologists will benefit from the new situation. Curious. It is an experiment that they have not sought. Not planned. But there it is.