They conclude that the Saturn core is diffuse.

Saturn's ring seismology has allowed us to deduce that the planet has a diffuse core. - Ed. ©NASA/JPL/Space Science Institute

Saturn's ring oscillations offer a view of the internal structure of the planet, according to an article published in the journal Nature Astronomy. From the data collected by the Cassini spacecraft, Saturn presents a diffuse nucleus with diffuse limits that condition the formation and evolution of the planet.

In the research just published, seismic measurements of the rings have been added to the gravity data. As a result, astrophysicists have gained a new vision of the internal structure of the planet. According to him, the nucleus extends to 60% of the planet's radius, much more than in previous calculations. Apparently, the core is diffuse, rather than completely separated and formed exclusively by hydrogen and helium, combining both heavy elements.

According to the researchers, the study of the internal structure of Saturn also serves to investigate other gaseous giants. 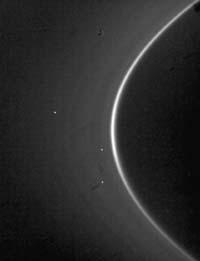