This introductory article on photography aims to start a new section dedicated to this topic.

It is a widespread hobby today.

More or less we have all had some camera in our hands and we have all taken some picture. No technical or artistic training is currently required. However, many times the results with the push of the button are not desired and, without a doubt, becoming aware of the operation of the camera, knowing certain artistic standards and helping the experience, these results could be greatly improved. This is the aim of this section: to help improve these results by analyzing the basic notions of photography. Or simply immerse yourself in the attractive world of photography.

Francis Frith, Samuel Bourne, Lewis Carroll and Julie Cameron took photos (XIX. In the second half of the 20th century), photographic activity was very complex. It demanded a job that was not prepared for anything and from our point of view we can hardly think of what it meant to take pictures of that time. The photographic emulsion was of wet colodion, which had to be spread in glass sheets shortly before the photo was taken (since the dry one was not sensitive to light); immediately after the photograph the sheets had to be revealed; this process could only be carried out in total darkness (therefore, it had to be carried a black shop that was laboratory); in addition, the camera was extremely heavy. Therefore, photography was in the hands of a few until George Eastman made his contributions.

Since then, taking pictures is becoming easier due to technical advances.

Over time, photography has become an important scientific and documentary tool, as well as a creative tool of its own.

It is difficult to realize what photography has opened up to our vision of the world, which has made us everyday.

Photography is the result of the union of two phenomena that were not related at first but that have long been known: the dark chamber and blackening in the light of silver salts.

The camera obscura (camera in short) is based on the principle of camera obscura. In a dark room with only an excited one, if the light reflected by objects outside it is inserted, the image of these objects forms backwards on the previous wall. It is known before the Christian Age and was used to see solar eclipses and draw them later.

On the other hand, medieval alchemists knew a chemical that altered its tonality due to light. The compound that we call silver chloride was called “corneo silver.”

Thomas Wedgwood was the first to try to combine these two phenomena (around 1800). He obtained images in silver nitrate paper, but he could not consolidate them. Niepce was the first to do so. 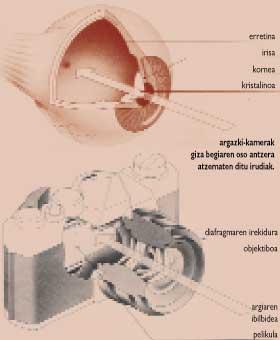 Note: To see this photo you can go to the pdf

Photography is a sustainable conservation process of images in a film and paper through light and chemicals. Through a camera, film or film, a focused image is brought to light for a limited time, to which the light that reflects that image comes. In black and white photography, the film or foil is covered by an emulsion of silver salts. The parts of the film or film that have come to light, after having them in proper baths, are blackened with different intensity depending on the light that has come to them.

In this way the negative of the image is obtained and it can be printed in two ways: by contact and by projection. In one way or another, the negative light reaches the paper covered by a special emulsion. In this paper the dark tones in negative will be clearly shown, since there has been less light passed and vice versa, making positive the image that was previously negative and according to the tones of the image of reality. In color photography the films have three emulsions, each of them sensitive to a basic color (red, green and blue).

The world is the raw material of photography. But if that world were not for the light, we would not see it, nor would we reach the movies of the cameras. To understand what a photo is, we need to understand what light is.

The eye captures the light reflected by the objects. This light penetrates the pupil, the light impresses the retina located on the edge opposite the eyeball, where the reverse image of the objects is formed. This information is transmitted to the brain as a nerve impulse. The color and intensity of light are cells called cones and canes.

The camera captures images very similar to the human eye. The light, through the lens opening, reaches the retina film of the camera. This light, like that of the iris, can be regulated by a diaphragm. The lens is made up of lenses that, like eye lenses, focus the images, which also form upside down.

But, although these similarities are important, there are also differences that must be taken into account so that we do not think that there is much difference between what is seen by the eyes and what is seen by the camera. The camera does not discriminate, it collects everything in front. Therefore, we should try to simplify it so that the photo is not confusing and heavy. The camera does not focus on itself. If everything we look at from the viewfinder appears focused, the camera will only take out the one that is at the focus distance. Therefore, we will have to put in the camera the distance that interests us.

The film increases the contrast, which forces us to leave the little illuminated dark to remove the illuminated areas of an image, or vice versa. Photography has only two dimensions, being the flat image. In order to obtain the third dimension, one must act with the lines or perspective of the components of the figure and with the lighting.