Is excellence in science possible without equality?

In response to the title question, Elhuyar Zientzia and Elhuyar Aholkularitza organized a round table on 13 November. Taking advantage of the framework of the Forum for Equality (Emakunde) and the Science Week (Innobasque), four women researchers were invited to discuss science and equality: Elena Aldasoro Unamuno from the Department of Health, Ainhoa Madariaga Martinez from Ikerbasque, Ainhoa Larrañaga Elorza from Mondragon Unibertsitatea and Teresa Nuño Angós from the University of the Basque Country. Combining their visions and trajectories, both attendees and the public had the opportunity to approach the reality of the Basque scientific system. 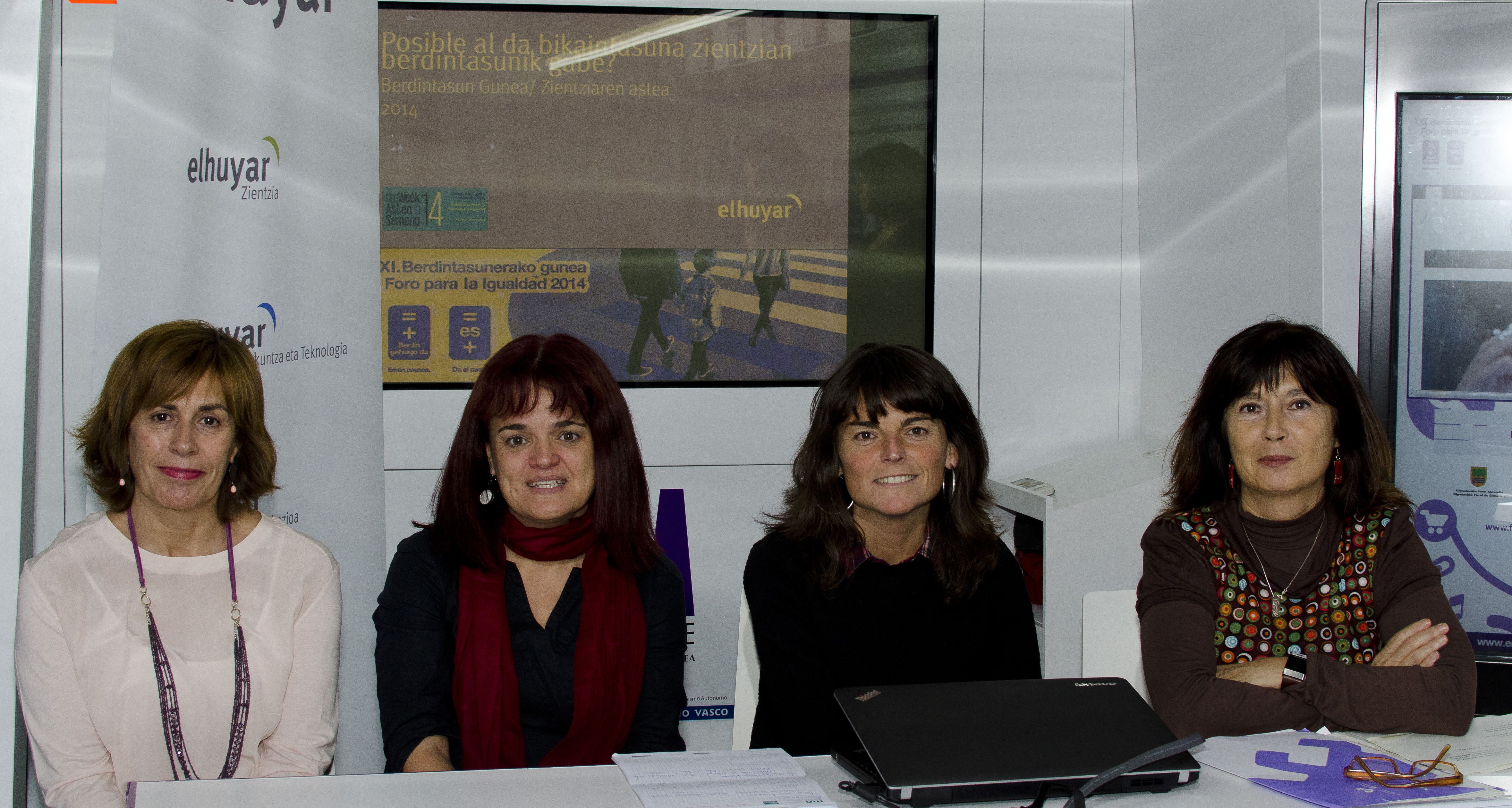 Elena Aldasoro Unamuno from the Department of Health, Ainhoa Madariaga Martinez from Ikerbasque, Ainhoa Larrañaga Elorza from Mondragon Unibertsitatea and Teresa Nuño Angós from the University of the Basqu

Talking about equality and science tells us about the contribution of women to science, the incorporation of the gender dimension in science, the distribution in scientific vocations, the role and place of women in the field of science and research, the resources women have to investigate, etc. There are many elements and, in all of them, the data indicate inequality.

If half of society is not well represented in the generation of knowledge, can we speak of excellence? Participants tried to respond to this.

Elena Aldasoro is director and researcher of the Department of Health Dependency area. Aldasoro has investigated heart attacks and showed that, having less risk of heart attack than men, women are more at risk of dying from heart attack. Research has taken into account sex and age in research. He said it is essential to integrate the gender perspective at all stages of research. Moreover, he states that because it is not considered in the gender dimension, “medicine applied to women is not based on scientific evidence as much as men”.

Later, Ainhoa Madariaga realized the situation of Ikerbasque. Ikerbasque is an organization based on excellence that currently has 177 high-level researchers, of which only 19% are women. The same happens in the program of young researchers, fewer women are presented to Fellow. The situation worries them and they begin to take action. For example, gender perspective is being introduced into curriculum evaluation criteria. Madariaga acknowledged that the situation is “serious,” that the problem is structural. Thus, they have great difficulties in combining the definition of excellence with the gender perspective. He ended his gap with a point of despair.

Ainhoa Larrañaga, professor and researcher at HUHEZI, left from desperation. He exposed his personal experience. He pointed out that his condition as a researcher and mother had occupied him as a “burden.” In those who have tried to change things and implement positive actions, he also encountered a desert. As a cooperative, he also pointed out that he has seen numerous contradictions. In the case of Mondragon Unibertsitatea, for example, only one center has in place an equality plan, the faculty of Business.

Teresa Nuño spoke below. He is Director of Equality at the UPV/EHU and in science education gender and science are his focus and work centre. I of the UPV/EHU. Within the Equality Plan, the diagnosis of the participation of women and men in the field of research was made known. According to Nuño, the situation of the UPV/EHU, although in general the participation between women and men is not very unequal (around 10 points), coincides with that of other areas: there is a horizontal separation between women and men (by research areas) and a vertical separation (by positions of responsibility). Regarding compatibility measures, Nuño raised doubts about this type of measures. Thus, for example, work-life and personal reconciliation measures are requested only by women and can be turned into tools for reproducing traditional gender roles. In that sense, he claimed that conciliation must first be co-responsibility.

Attendees had the opportunity to express their vision. As young women researchers, it was stated that what was presented in the program corresponds to what they themselves live. Along with this, they made clear the desire to change things. They say that excellence must be redefined, and not only in relation to equality, but more general.

From the roundtable we went on to state at least two hypotheses: on the one hand, that without equality excellence is not possible in science, and on the other, that science is far from equality. Nuño stressed that the only way for women to succeed in science is to change the definition of success. Larrañaga warns, without active policies, that the current imbalance will hardly be altered. Nuño recalled that we have tools to use because they offer possibilities to deepen equality: Spanish Law on Science and Basque Law on Human Rights for the Equality of Women and Men.

The problem is not limited to Euskal Herria, we are talking about a global phenomenon. The SHE FIGURES report informs us of the existing institutional differences. In the field of research, steps have been taken to change the situation, as demonstrated by the gendered innovations movement led by scientific historian Londa Schiebinger of Standford University. This is a project developed jointly by specialists in natural sciences, engineering and gender from different countries. The main objective of this project is to “expand the creative power of sexual and gender analysis for new discoveries.” It is possible that from that path we do not have to ask ourselves in the future Is excellence in science possible without equality? ".