Volcanic eruptions cause the Earth to cool in general. But some US researchers claim that when an eruption occurs in Eurasia and North America, winters are quite scared. And it does not matter that the eruption occurs in one or another hemisphere. The eruption of the Pinatubo volcano in the Philippines caused greater notoriety in the winter of 1991/1992. 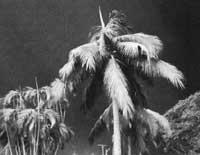 Alan Robock and Jianping Mao of the University of Maryland have explained that the temperature of the earth's surface has changed in the coming months of the major eruptions. Twelve large eruptions were analyzed with computers from the Krakatoa eruption in 1883 to the Pinatubo eruption in 1991. At the same time, the reason for the tempering of the Northern Hemisphere was explained.

The main reason is that in winter the winds of the high latitudes and semi-latitudes are reinforced and thus comes more marine air to the continents. In winter the sea is more temperate than the terrestrial (and vice versa in summer), so the sea wind storms the continents.