Rudolf Ludwig Mössbauer (see figure 1) was born in München on 31 January 1929. Therefore, this year marks the 60th anniversary of his birth. The story of the effect that bears his name is very interesting. Free announcement While young Mössbauer was conducting experiments for his doctoral thesis, he discovered a strange phenomenon that he did not expect. In these experiments he used the isotope 191Os as a source. This isotope, due to the beta disintegration, passes to the 129 keV state of the isotope 191Ir, moving from this situation to the fundamental situation, that is, when moving to the state of minimum energy emits a gamma ray of 129 keV, with a line width of 5x10-6 eV. 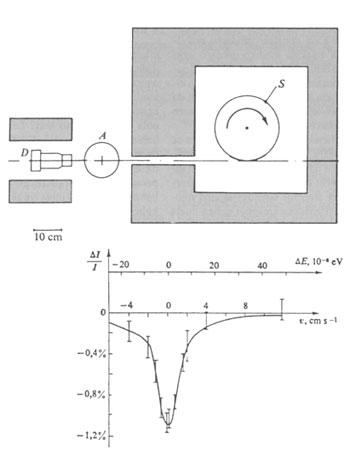 Above: Equipment used by Mössbauer A) absorbent inside the cryostat. S) rotating fountain on cryostat Down: Iridium absorption spectrum at 88 degrees Kelvin. In the x-axis you can see both the speed of the source (v) and the energy of Doppler (DE) (R.L. Mössbauer, Naturwiss, 45 (1958).

Mössbauer measured the transmission of these gamma rays through the natural iridium crystal (38.5% 191Ir) and built the device indicated in Figure 2. This experiment is called resonant fluorescence or absorption. The gamma rays emitted by the nuclei of the source when passed to fundamental state in this type of experiments are absorbed by cores of targets of the same type, rising to the same initial situation as the emitting nuclei of the source without the direct transmission of that gamma ray. Fluorescence was well known in atomic spectroscopy. If the radiation is of nuclear origin (because the energy width of the radiation is very small), the delay energy that supports the nucleus by emitting gamma ray is greater than the natural width of the line, so no resonant absorptions (or fluorescence) occur. If the Doppler effect brings energy to the gamma ray, resonant absorption will occur.

After his observation, he began his work, both experimental and theoretically, to clarify this unprecedented effect. When the core is attached to a crystal, its movement can be compared to the movement of a group of oscillators, which is what Mössbauer did. In this case, if the delay energy is insufficient to move from the fundamental situation to the first (creation of phonons) (conservation of the linear moment), the entire crystal (and not only the emitting core) will be delayed. Therefore, the delay energy will decrease according to the number of cores of the network (order 1010 in the network of a cubic micron) and being this value much smaller than the width of the energy line of the gamma ray, will be negligible. In these cases we speak of emission without delay. 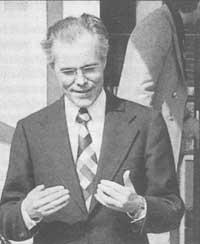 R.L.Mössbauer in 1976 as director of the Institut Laue Langevin.

Mössbauer estimated that, by replacing the crystalline grid with frequency oscillators\ E (following Einstein's model), the lag-free emission will only occur if h\ E=k\E>>E>2/mc2 (E ray energy{= Einstein temperature). However, being the real spectrum of vibrations more complex than the one exposed in Einstein's model, he later used Deby's approach. This model found that by raising the temperature the probability of emission without delay decreases and that if the temperature is high with respect to the temperature of Deby the probability is negligible (see figure 3). In the same figure, if the temperature of Deby is increasing, that is, if the binding forces of the crystal are increasing, it is also indicated that the probability of emission without delay is destroyed at higher temperatures. Mössbauer exposed the characteristics of the effect in 1958, but spent more than a year until its approval by the scientific community. For his work he won the Nobel Prize in 1961.

The nuclei of Mössbauer, that is, the nuclei that emit gamma rays without delay, are many, being the best known the 57Fe, since the probability of events without delays at room temperature is relatively high and iron is part of many substances of interest. The incomparable precision of the Mössbauer spectroscopy is that the natural width of the line is 1013 times less than the transition energy, that is, compared to the aforementioned precision, we can measure the changes in the order of a micron at a distance from Earth to the Moon.

The energy variation corresponding to the Mössbauer spectrometers is made by the relative movement between the sources and the absorbers, that is, by the Doppler effect. Speeds are usually small, several millimeters seconds.

a) Isomic variation or interaction between the non-punctual distribution of nuclear charge and electrons likely to be in the nucleus. This interaction generates a variation of energy levels. Since this change is not the same in the fundamental situation and in the exciting situation, that is, in the one with the greatest energy, the absorption line slides. The intensity of the slide gives us the idea of the density of electrons likely to be in the nucleus or the shielding in them existing, that is, of the chemical medium of the nucleus of Mössbauer. 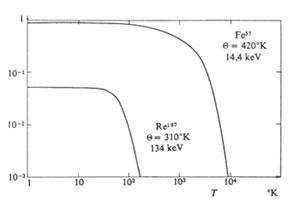 In the case of chemical research the most important Mössbauer parameters are given in the isomic and multiple quadrupolar variation. These parameters carry out studies of spin and oxidation states, molecular symmetry, analysis and separation of chemical compounds, corrosion, catalysis, etc.

Research into the magnetic properties of materials is the most common application of Mössbauer spectroscopy. The most commonly used Mössbauer isotope is 57Fe, as iron is one of the most common components of magnetic materials. Much of the information on magnetic compounds can be obtained from hyperfine parameters and some of the investigations that can be carried out are: Temperature and type of magnetic order (ferromagnetic, antifromagnetic, etc. ), distribution of atoms between magnetic or crystallographic positions not equivalent, study of the magnetic structure, etc.

Several biological molecules carry iron and other metals and the Mössbauer effect is very useful for studying some enzymes and proteins, one of the most remarkable cases being hemoglobin. In biological compounds, sample preparation is special, must be in aqueous dissolution and measured when frozen. The most studied molecules are hemoproteins, proteins that contain iron and sulfur, and those that accumulate and transport iron.

Mössbauer spectroscopy has also been used in other areas, some of them Mineralogy, Geology (terrestrial and lunar), Archaeology, non-crystalline matter, etc. being. 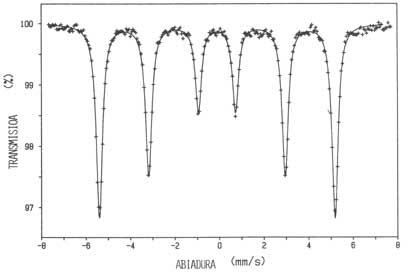 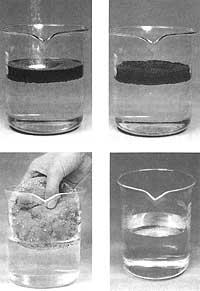