Aspergillus fungus is mold, forms very long filaments in plants or soil wherever organic matter is present. Some filaments are characterized by their hyssop appearance and then form thousands of small, rounded spores. 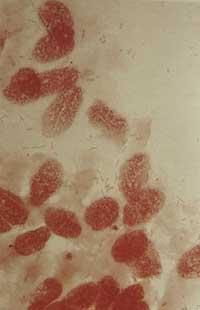 The pulmonary macrophages seen inside are Legionella neumophila bacteria.

Spores are dispersed by air currents and if they reach an appropriate place, each spore creates a new mycelium. The fungus Aspergillus has 300 species, but only 17 of them are able to attack man and are not particularly virulent.

Aspergillus fungal infections are called aspergillosis and their severity always depends on the immune status of the host, so the most common clinical form is pulmonary aspergillosis. In principle they are not able to invade our respiratory tract and continuous inhalation of spores will cause allergies, but not infections. But patients who get into the operating room, often with immunodeficiency from another disease, may die from infections with the Aspergillus fungus.

It seems that, at least in the case of aspergillosis, being in hospital replacement is the most related factor to the increase in the number of cases. In the environment it can always live in freedom attached to water, but it is able to invade the mucosa of the human respiratory tract, especially when the defenses of the host are crouched. It produces atypical pneumonia called legionellosis and is sometimes mortal6. 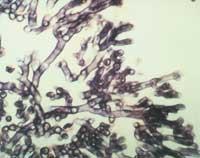