What Maurice Ward has achieved is curious and surprising: “plastic” able to withstand a temperature of 10,000 (ten thousand) °C. Polymer research experts have surprised that this new material does not spoil at temperatures ten times the limit of the most thermoset plastic.

This sixty year old man was excited in 1985 to see 54 people killed at Manchester airport by a fire on a plane. The death by inhalation of fumes from the combustion of plastics in case of fire is known. The 54 people mentioned also died that way. For this reason, since the Manchester disaster he has tried to get a fireproof plastic and in 1989 he had ready the material that supported the flame of the torch without smoke coming out.

Mr. Ward explained his accomplishment, that is, the material he calls Starlite (star light), but at first people did not shake much. In fact, it was not to believe that what the most prestigious chemists in the world had never achieved had been prepared by a gentleman for three months, as Mr. Ward. 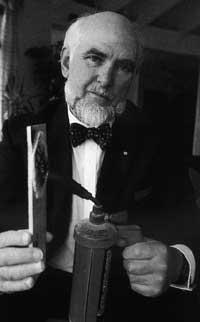 On the other hand, it was difficult for that achievement to be copied from any laboratory, since Mr. Ward was a professional hairdresser. Therefore, everything he says generates nothing but distrust in scientists. In addition Mr. Ward gives very little information. The new product consists only of plastics, ceramics and additives. You have also not applied for any patents, as for this you should provide the composition of the material. In addition, anyone can read patent reports and it would be enough to change one or another component of the material to make and copy another similar. Mr. Ward uses the ever-present material sample. Allows to perform the test, but collects it as soon as it finishes.

However, the fire-resistant material could not be discarded forever, especially for the ease of testing. The military was very interested in the resistance of laser materials and the Weapons Establishment of Great Britain has revealed on television the surprising characteristics of the Starlite material. The laser beam is focused at one point and held for two minutes at a temperature of 10,000°C. The material has not deteriorated.

Other trials have been conducted. After a starlite screen he put an egg and warmed up with an acetylene torch. No eggs were cooked. Even the egg was not heated.

Since then, numerous tests have been carried out to measure the characteristics of the new material. In a laboratory they throw the plasma jet they usually use to cut steel plates of centimetric thickness. There have also been 75 tests simulating the atomic explosion, and a 0.25 mm thick sheet has withstood the heat from the 2 cm thick steel. Therefore, this material is completely fireproof, a surprising thermal insulation.

Mr. Ward has finally been accepted by scientific publishers and recognized as high-tech material by Jane’s International Defense Review. People from governments and private industries are also behind. They seem to want to use the new material in military applications (such as satellites), but civil application can be very extensive: fire protection in online aircraft, thermal insulation in homes, fire protection in oil wells and warehouses, etc. Starlite is a material that in fires does not extract toxic fumes as in other plastics.

However, there are points that have not yet been clarified. The minutes in which the Starlite material can withstand maximum temperatures are unknown. Nor do they resist lower but relatively high temperatures for a long time. On the other hand, the mechanical strength of this plastic at high temperatures is unknown.

Starlite's problem would not be the melting temperature, but the high temperature resistance of a flame. And these are two concepts. Spaces, for example, when they return to Earth after orbiting, have a surface temperature of around 1500ºC by atmospheric friction. Therefore, it is placed as protection a shield, which is not usually made with materials of difficult heating, but with an organic resin (phenolic or epoxy) whose melting point is only about 150 ° C. Thus, with atmospheric friction, the resin evaporates sharply and this gas protects the surface of the space, located between atmospheric air and fuselage.

When the Starlite material approaches the flame of the torch does not come out gas. Therefore, this material is mainly composed of minerals, which use plastic as a bond.

However, it is still too fast to claim that this material will be a technological revolution. Important companies in the chemical industry stopped researching plastics with interesting thermal properties about ten years ago. Difficulties in working and price are the main barriers. If the melting point of these plastics is only 350ºC and there are difficulties for production, how will the 10,000°C Starlite be worked with extrusion or molding? It seems that the only way to work will be with fine sheets, but Mr. Ward says he has the new system to work his material.

Meanwhile, Mr. Ward is waiting and, if he leaves his invention to anyone, he says that it is mandatory to have in his power most of the company's actions. If not, you don't want to try. 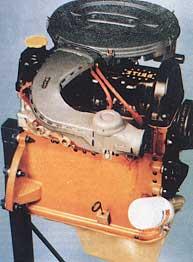