Meeting of Basque mathematicians and users of GeoGebra

Basque Summer University (UEU) 46. This year he has organized the Summer Courses. Conferences, courses and workshops of all kinds, under the slogan #ElkarEkin, complete this year's offer. On July 4, GeoGebrare mathematicians and users had the opportunity to meet. They met in Eibar and the same day the III were celebrated. II Meeting Users and GeoGebra. 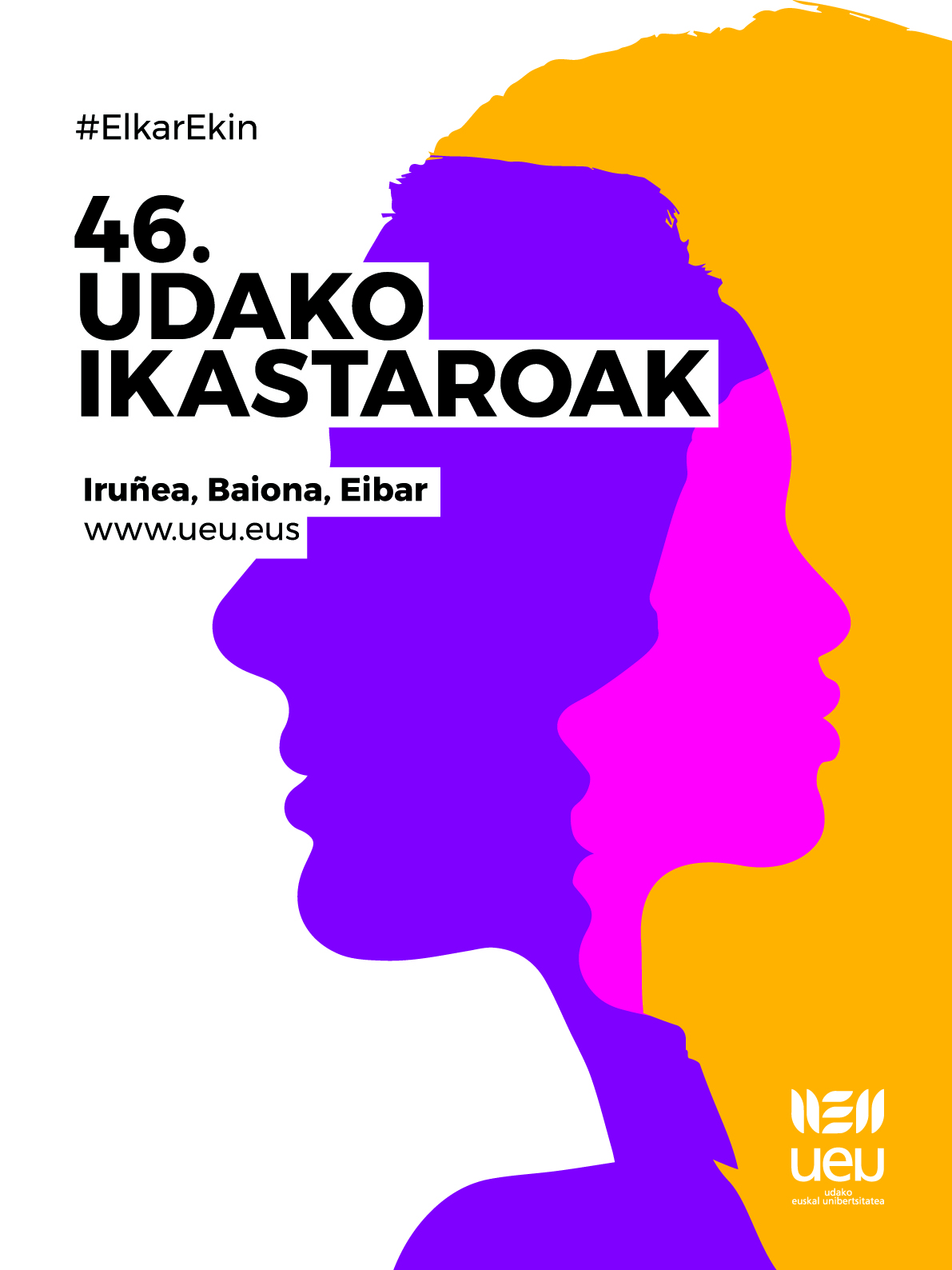 In July the third meeting of Basque mathematicians was held in Eibar, and this year the second meeting of GeoGebra users. GeoGebra is a mathematical program that serves to work geometry, algebra, statistics and analysis, among others. The software is free and is characterized by being dynamic. One of its objectives is to contribute to spatial visualization and mathematical abstraction, and it is ideal for active and autonomous learning.

However, not everyone who participated in the meetings were mathematicians. They were also from other sciences or have studied engineering. The assembled have in common that they use mathematics in everyday life, that they are well solved with mathematics and that they are proficient in mathematics. A guest speech opened the meeting. Parallel communication sessions were then held between the most Basque mathematicians and GeoGebra users. After the morning break, the mathematicians continued with the communication sessions and the GeoGebrazale talked about maintaining the Basque version of the software. The meetings ended with workshops parallel to the afternoon.

Dancing to the rhythm of mathematics

Judith Rivas gave a lecture entitled “To the Rhythm of Dancing Mathematics.” Judith holds a PhD in mathematics and a Professor in the Department of Mathematics at the University of the Basque Country at the Faculty of Science and Technology. Judith, in addition to mathematics, also likes dance. Although dance and mathematics seem to be two disciplines far from each other, it showed us the relationship between them. He explained to us the mathematical properties of the geometric figures that the dantzaris represent with the movements of their bodies. It helped us to identify what symmetry and isometry exist in the dance of the bow, the arin-arin, the curb, the lindy the hop, among others, and brought to the stage of mathematics some investigations that relate the deepest fields of mathematics to dance, such as the topological theory of braids and the dance of ribbons, the theory of groups and the balance. In addition, he explained how computers and mathematical modeling have been introduced in the field of dance, as digital choreographers have been incorporated into dance.

Communication sessions were conducted in parallel. Twelve papers were presented at the meeting of mathematicians and three at the meeting of the GeoGebrales. The speakers who presented the communications were: UPV/EHU, Basque Center for Applied Mathematics (BCAM), Institut de Recherche en Informatique de Toulouse-Centre National de la Recherche Scientifique (IRIT-CNRS), Universidad Pública de Navarra (NUP) and Federación de Ikastolas del País Vasco (EHI). It was as varied as the origin of the speakers what was worked on communications.

The communication session of mathematicians began with inverse problems. These problems appear in different everyday areas (medicine, communications, etc. ). ), and from the results of the equations, the objective of these problems is to deduce the parameters of the equation. Fractals of conservation and fractional derivatives were discussed below. We were also able to see how to design accurate and effective algorithms to solve big orientation problems. A path optimization problem is the orientation problem, whose challenge is to find the path that maximizes the sum of prizes. From the problem of route optimization, we jump to analyze the impact of mobility on wireless networks. We were able to analyze a system that runs in parallel and is composed of several servers, demonstrating that its performance depends on mobility.

In addition, they presented a work done in the field of logistic regression models. They explained how they have corrected the overestimation of the predictability parameter of these models. We also had the opportunity to know the discrete version of Hardy's uncertainty principle, to explain the mathematical structure of the Talbot effect, based on the diffraction of light, and to tell the secrets of Stern's succession.

In another communication presented we analyzed the mathematics of the roads. We were able to learn more about the clotoid curve so used in civil engineering. Civil Engineers are responsible for the development and execution of road and railway projects. These works require a geometric design. An important aspect of geometric design is the transition from a horizontal plane straight to a clotoid curve. On the other hand, we could see some examples of industrial mathematics; we had room to talk about the mathematics that are used in petroleum engineering and explained how an objective oriented adaptation can be made in the broadcast advection equation by explicit methods.

Communications submitted by GeoGebra users were proposed for all educational levels. In Infantile, Primary and Secondary we were described a proposal to work flat geometric figures based on the theory of Van Hiele. Subsequently, we proposed the possibility of integrating GeoGebra into the four courses of Compulsory Secondary Education (ESO). They described the path that could be continued using GeoGebra: on the first level, starting with the graphical approach; on the second, using the 3D approach; and on the third and fourth, until finishing with the work of graphic vision, CAS calculator and statistics. We saw that the use of GeoGebra can also help in the subjects of Algebra and Geometry and Graphic Expression in Engineering. Thus, we presented the projects that are working in different degrees of the School of Engineering of Bilbao using GeoGebra and we were able to see some of the interactive and interactive activities that have developed so far. The presentation that followed the GeoGebra communication session was related to the maintenance of the Basque version of the GeoGebra software. Despite the fact that the software is translated into Basque, the innovations made to the software make the translations constant.

To tell it there were brief communication sessions, and although the topics discussed were very varied, we were eager to hear more.

In the afternoon there were two workshops in parallel sessions. One of the workshops was conducted by Aitzol Lasa. Aitzol works not only in research but also in outreach. In particular, he explained how geometric and functional modeling can be worked in secondary school from the point of view of algebra teaching. According to him, GeoGebra software, in addition to being an effective tool for working geometry and functions, is appropriate to work algebra, which was highlighted in the examples and exercises worked in the workshop. 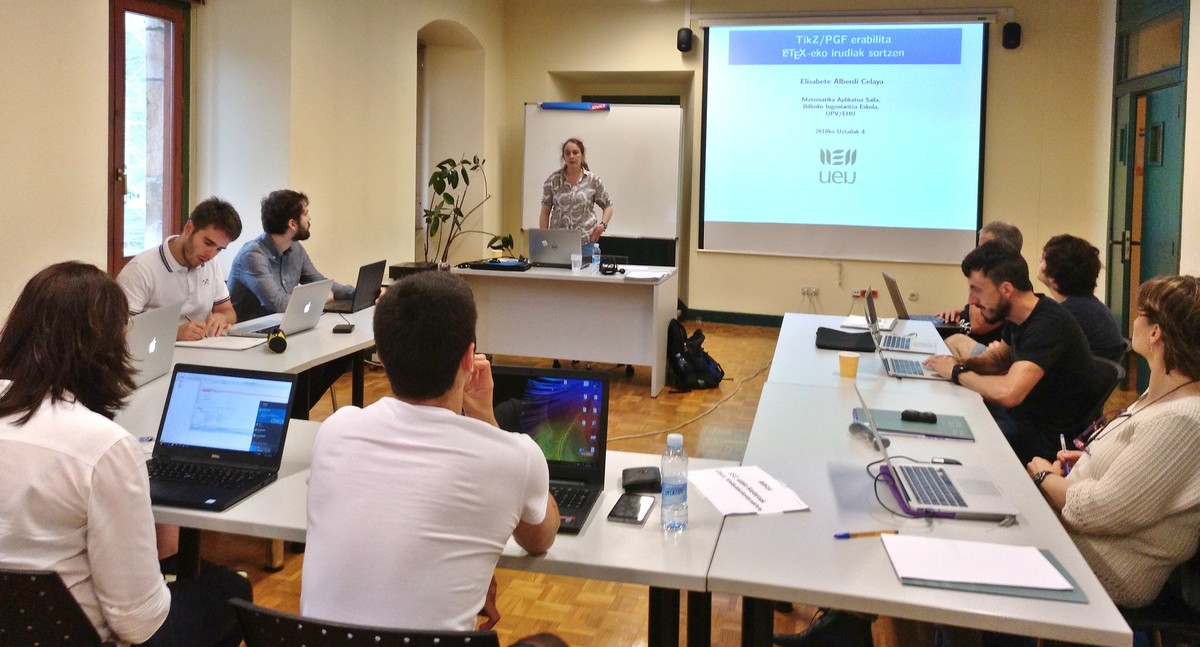 The second workshop discussed how images of LaTeX can be created using Tik Z/PGF. This workshop was worked by Elisabete Alberdi. LaTeX is a software free of production of technical and scientific documents whose main objective is to generate very high quality documents. Tik Z is a tool that allows you to create different graphics and images in the LaTeX environment. The Z-type graphics pack is loaded on LaTeX. The TeX commands are listed below to make the desired image. As for the term “PGF”, it must be said that from Tik Z was created with both LaTeX and LaTeX based on PostScript to be usable. In the workshop, the first steps were taken to develop Z-type graphics, and participants learned how to make basic images, flow diagrams and function charts.

Even though we talked about mathematics all day, the day fell short for those of us who approached and were eager. We talked about the mathematics that appears in many fields and we just had to start dancing to the rhythm of mathematics. In addition, awareness of the presence of mathematics in the world of dance made us think whether mathematicians have any special gift for dance. We left the answer for the fourth meeting.