Lauburu, the wheel of life force 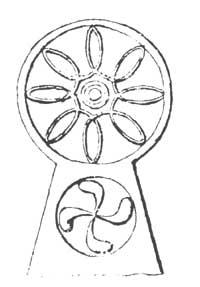 The Basques, since very young, have seen among us a symbol as curious as that of four heads. In other times it was considered a symbol of nationalism, since what was totally forbidden was sent inside. She was the silent source of our national feelings, the treasure of our Basque identity, and in her we used to put often our confidence of popular identity; the basis of our special character, as if it were the same living foundation of our Basque oppressed conscience.

He was at the same time the flag and the rocket; the magical bond of the hidden past, the rough present and the free future, the sea and the star, suffering and hope, the roots and the rods of the future; said in a word of unique character: “the first, the present and the future.” And so, through our voracious child's hand, our folders, books and notebooks, were clothed with a lot of wrong lauburus, blinded and not so blinded, big and small, carrying school reflections to another dimension.

Suddenly, when we found films and comics from the Second World War, with pain and sadness, we could see that our lauburu had a bad brother. Our beautiful lauburu become a symbol of the Nazi murderers, how will it be?. We could not understand it. Symbol of our ideals, symbol of our nature and freedom in the hands and flags of the German Nazis, how and why?

Fortunately, we soon look for solution, differentiation. While the German was square, ours was rounded, and while his looked to the left, ours to the right. Thank you! 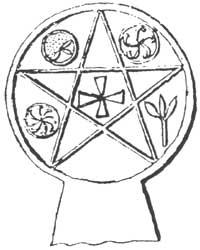 From there we start from that road, orienting all our rounded lauburus to the right. However, when we saw the square lauburus of some graves and houses and to the left it seemed a concern and a doubt, but we went ahead with us. They yours and us ours.

Dissemination of the Swastika

Although the lauburu is a great element of our culture, today's Basques know perfectly well that the lauburu or swastika best known for its generic name is not only ours; as it is open to the four winds of the world, it is of all humanity.

It can be seen in the civilizations of Europe, Asia and America, and from India, China and Tibet to Germany, Euskal Herria and Iceland. From the Azttros to the Greeks. So from one end to the other of the world.

It must be taken into account that swastika can adopt very special forms. Yes, preserving the essence well. You can look to one side or the other, have three, four, six, eight, ... arms or heads, even if the head is the most extended between us, and your arms can be square or rounded.

The oldest swastika has been found in Trasilvania and seems to have been built in the late Neolith era. XIV. Advanced Christ Reappears in some tracks of the twentieth century and also among those of Ilion (Troy). IV. A. A. C. C. It can be seen in the culture of India in the fifth century after Christ in China. A century later, that is, the VI, appears in Japan and the Buddhism that was developing at that time considered it his symbol. Since then it has been seen all over the world: In Greece, in the Roman Empire, in the Germanic Peoples, in Euskal Herria, in Britania, in Russia, in Tibet, among the Wikings, in the indigenous cultures of ...

Since then, in our century, German Nazism considered it a symbol of Aryan blood, extending with it its racist theories. As a curiosity, it should be mentioned that in 1925, when the “kuna” Indians of Panama were raised (by binding the national guards and creating in their lands an independent republic called “Tule”), the cross gamada made in the orange background fabric was considered as a flag. 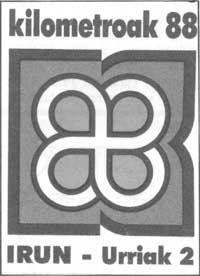 The lauburu is considered in recent times as a symbol of nationalism. It appears to us anywhere and at any time. Below is the drawing used in the event called Kilometroak 88.

As mentioned above, the swastika or gamad cross is spread throughout the world, but in Semitic territories such as Egypton, Kaldean, Assiria, Phoenicia, Palestine... it is hardly known. Aware of this, the German ideologue Haushoffer concluded that the swastika was, in ancient times, the symbol of the Arys peoples who had been extended, and proposed it as the teaching of the German people.

Before, in 1891, Ernest Krauss defended the thing, and in 1908, Guido List argued that the cross gamada was a symbol of esoteric knowledge extracted from the common epic called “Edda” and the clean blood of the arys.

All the researchers, as they enter the obscurity of the swastika, encounter the mysterious name “Thule”. Yes, in many curiosities, around the swastika appears the holy name of “Thule”, the distant and unknown town of the Wikings of the time, and the example is that of the Indians “kuna” of Panama that we have seen in the previous chapter.

Let's also say that in the Russian court of the Tsarists, and perhaps by the influence of the Theosophists, it was long ago that Alexandra Ferodovna was involved. We know that before his execution the last tsar wrote on a wall of the house of Ipatiev a mysterious swastika and letter. Although the soldiers have taken a rigorous order to remove everything, there seems to be some place where a photo of the previous action is hidden. All the people exposed around this letter were killed, and casually the boat of one of them, Baron Otto Bautenas, was called “Asgärd” (Thuleri’s kind name in Irish tales).

In 1925, National Socialism, based on the theories of the ideologist Horbiger, was recruiting his companions. At that time they believed that in the desert of Gobi, 30 or 40 centuries ago, there was a great and advanced civilization; disaster (perhaps atomic?) what would later disappear as a result of a horror. But those who were saved, led by the god Thor, headed towards the territories of North Europe and Caucasus, rebuilding in the new lands other poorer and backward civilizations. Therefore, when the Nazi ideologues preached the return to the roots, they also advocated the conquest of Eastern Europe, Turkestan, Pamir, Gobi and Tibet, which they considered that whoever dominated that vast territory that was the heart and axis of the world would become the head of the world. 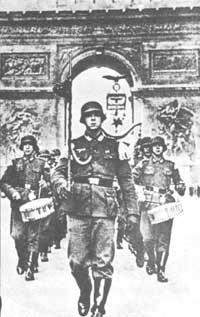 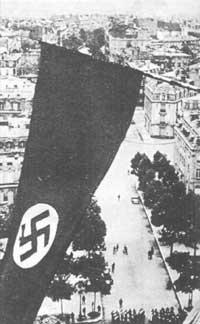 Hitler knew well the power of the swastika and tried to seize power with its symbology.

During Hitler's command, the relations between Tibet and the Germans strengthened and proliferated and sent numerous delegations to the Tibetan laminates. In 1926 small Hindu and Tibetan colonies were installed in Berlin and München, and it seems that when the Soviets entered Berlin, about a thousand corpses of Himalayas dressed in German uniform were found.

According to Nazi theories, the arys would conquer the whole world, eliminating from the earth Semitic peoples and other degenerate secondary peoples who were out of the protection of the swastika, and their highest group, the Thule, would dominate and direct the world for thousands of years until the next flood.

In view of all this, it is very easy for us to understand what happened during World War II and the bitter death and blood that the cross gamada left before the eyes of the world.

Magic symbology of the swastika

In both Europe and Asia and America, swastika has been considered a magical symbol. The sun is believed to symbolize heat and energy source, the seed of life, ... and its continuous movement. The square or rounded arms (three, four, six, eight, ...) that leave a center indicate that the heat of the sun and the continuous energy dance, jira-bira. As we see, the swastika can rotate on both sides. If you move to the left is called levógiro and if you look to the right is called dextrógiro. And it seems that in this double opposite movement the swastika acquires great significance from its symbology.

The ancient naturalist man, the world, the whole, divided him into two aspects: a pessimist, bad, ugly, cruel, ... and the other, quite the opposite, that is, optimistic, beautiful, good, rich, sympathetic, ... He based his own existence, his life and that of all beings of his environment in the midst of this duplicity. Therefore, while the swastika levógira indicates optimism, dextrógiro means antagonism, that is, pessimism.

Others identify swastika with fire and thunder (as in Germanic mythology), but always preserving and showing its inner duplicity. The German Nazi ideologues, like the Tibetan lamas, knew well the hidden symbology of the swastika, and thus the first and the second have taken advantage of its meaning and image to explain their purposes and reflections. It is no coincidence that when opening the front of the Soviet Union Hitler in some mountains of the Caucasus, through climbers, put the reddish-black sign of the cross gamada, nor the graphical use that they make of this cross to express good or bad times in the lamerías of Tibet.

In Euskal Herria, although this symbology is already totally lost and without forgetting its decorative role, the use of lauburu and zortziburu can be incorporated into the process of affirmation and strengthening of the Basque identity. The same happens in Brittany with the trident, who have it as the flag of their identity and their nationalism. 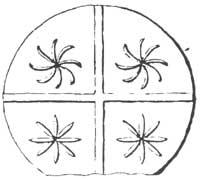 The duality of the swastika is similar in eleven parts of the world, as the magic symbol in the basic principle “ying-yang” of the Orientals, or the Roman god Jano and his two opposite faces, ... or the numerous pairs of gods totally opposed to the beliefs of the Basques: Mari and Maju, ...