Comets and asteroids, what is it?

50 years ago it seemed clear what the asteroid was and what comet. They had differential characteristics and could be classified into two distinct groups. Comets were “dirty ice balls” generated at the boundary of the solar system and asteroids were rocks floating between Mars and Jupiter. The comets have various orbits, while the asteroids have very elliptical orbits that orbit the Sun in the same plane and direction as the planets. But in the last 50 years, as more asteroids and comets have been discovered, asteroids have appeared that behave like comets and comets that behave like asteroids. And, of course, scientists have had no choice but to revise their definitions. 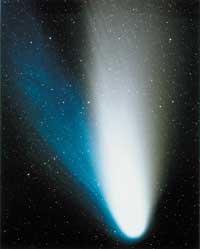 The best-known theory describing the core of the comets was that of American astronomer Fred Whipple in 1950-51. Whipple's theory described very well the comets that were then known, as well as their behavior and peculiarities, and for many years it was considered totally real.

Whipple defined kites as a “dirty panic ball.” According to him, the core of the comets consisted of ice fragments mixed with methane, ammonia, carbon dioxide and dust. When the comets approached the Sun, the surface ice evaporated, releasing the jets of dust and gas and forming the tail of the comets. As the comet ages, the dust would be dispersed around the comet's entire orbit, floating and when the Earth crosses this region rainstars would occur. In fact, most star rain occurs associated with a certain kite.

Asteroids are small rocky bodies without atmosphere. The largest is Ceres and is 930 kilometers in diameter. It was discovered by the Italian Giuseppe Piazzi in 1801 and besides being the largest, it is the first asteroid observed by man. At that time, a group of astronomers in Berlin tried to detect a planet in the gap between Mars and Jupiter, because, according to theoretical calculations, there should be a planet.

But their father Piazzi overtook them and found the asteroid Ceres. In 1802 Palas was discovered, the second largest, in 1804 Juno, in 1807 Vesta and in 1854 Astrea. Since then almost every year a new asteroid has been found in the region, estimated at about 400,000 kilometers. However, Berlin astronomers were not entirely wrong, because it is believed that the asteroids accumulated in this region called asteroid belt are remnants of a planet that did not come to form due to the great gravity of Jupiter.

A sphere of ice.

Whipple was a clear and simple theory. He explained clearly what comets were and how they aged, and it seemed that he related well the concerns of the comets with all their hair. But in 1983 Whipple himself expressed several concerns.

That year the astronomical observatory IRAS, which worked with the infrared, detected a curious asteroid, the asteroid 3200 Phaethon. Its orbit was very eccentric and Geminida coincided with that of the weather current. After analyzing this curiosity well, astronomers concluded that asteroid 3200 Phaethon could be a dead comet and that he was responsible for the rain of Geminid stars that occurs every year in December. Then Whipple's theory began to crack, placing comets and asteroids in different boxes. And he kept cracking.

Years earlier, in 1977, Kowal discovered Kiron between the orbits of Jupiter and Neptune. It was classified as an asteroid and for ten years it gave no problems. But in 1988, when he approached the Sun, he began to act as a comet rather than as an asteroid. It became very bright, then developed an atmosphere of dust and gas emissions were detected by January 1990. That is, although far from the Sun it behaved like an asteroid, near the Sun acquired all the characteristics of the comet. Kiron was the first object classified as asteroid and comet and is currently known as comet 95P/Kiron or asteroid Kiron (2060).

Comet Shoenaker-Levy broke into two dozen fragments when it passed through Jupiter in 1992.

In addition to the chirones, two other objects have been classified as asteroids and comets. 107 P/Wilson-Harrington = (4015) Wilson-Harrington and 140P/Elst-Pizarro = (7968) Elst-Pizarro. The first was detected as an asteroid in 1979, but as a comet 30 years earlier; the second, although it seems to be one of the asteroids located between Mars and Jupiter, in 1996 developed a tail like that of the comets.

Orbit and composition are the two fundamental characteristics of the distinction between asteroids and comets. But they no longer serve. It is believed that most of the asteroids in the solar system originated between Mars and Jupiter and orbiting the Sun in the same plane and direction as the planets. Most comets come from the Oort cloud, beyond the boundaries of the solar system. In 1950 Jan Oort suggests that comets with long term orbit spend most of the time in Oort's spherical cloud.

Subsequently, the work of Gerad Kuiper showed that the long-standing comets were formed in a region beyond the Neptune (the Kuiper belt), from the outer residues of the solar system, and that they were subsequently thrown, due to the gravity of the large planets, out of the solar system totally or to the Oort cloud.

It is believed that in the Oort cloud there are billions of comets and that occasionally they are thrown into the solar system by the gravity of the great stars and planets passing through there.

Then they move making very eccentric orbits. But not all objects in the Oort cloud are comets. It is said that 3% can be asteroids, launched by the gravity of Jupiter up there, which also make very eccentric orbits. On the other hand, comets with short orbits have fallen under the influence of Jupiter's gravity forming orbits that seem to be those of asteroids. Therefore, from the exclusive point of view of the orbit it is not possible to distinguish exactly what the comet is from the asteroid.

Section of asteroid detached to the ground.

As for the composition there is more than one doubt. Especially since it is possible to calculate the density of comets and asteroids. In fact, if comets are mainly ice, the density of the core should be about 1g/cm3, near the standard water density. However, some comets have very low density nuclei, as if, instead of being a compact nucleus, they were formed by fragments that gravity keeps intimately united. The Shoenaker-Levy comet, for example, broke into two dozen fragments when in 1992 it passed through the side of Jupiter, it was but a compact comet. In fact, the strength that Jupiter could exert was too weak to divide a compact nucleus of terror.

Comets of weakly related parts are described by the “waste peak” model. A peak of waste hardly has internal tension, it is very porous and its density in the core is very low, as the comets mentioned. It is believed that these comets were due to external collisions of the solar system and that many asteroids circulating near the Earth could be part of ancient low-density comets.

As not all comets are equal, neither asteroids. They are divided into three groups. Class C's are the least luminous and are composed of hydrated silicates, carbon and organic compounds. Type S reflect more light and may contain pyroxenes (magnesium, iron and calcium silicates), olivine (magnesium and iron silicate) and nickel metals. M are rarer and consist of nickel, magnesium and iron silicates.

For asteroid research models are used. The image depicts the relief of the asteride Veste in colours.

Most C-type asteroids are found outside the asteroid belt and S-type asteroids inside. The C are supposedly the most primitive. They have no chemical distribution, that is, the components are not distributed in layers as on Earth. Therefore, it is considered that they have never warmed up, since as has happened on Earth and in asteroids of type S, the minerals would be divided into layers.

Asteroids can have a wide range of densities. In general, type C are lighter than type S, but it has been observed that “waste peaks” such as comets can be porous or have a solid core. In addition, researchers have found that a piece of asteroid that fell in Texas in 1998 had salt crystals as old as the solar system. If there are no signs of the collision of the crystal with a salt kite during the youth of the asteroid, it can be indicated that the asteroid had once water in its structure. Therefore, in addition to the comets, there may also be water in the asteroids.

In view of all this, it is clear that comets and asteroids have more similarities than they expected and cannot be classified into two different and independent boxes: they are part of a larger family, of the family of small bodies of the solar system.

Demonstratives of the past 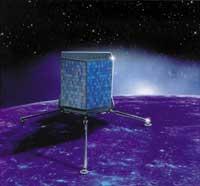 Representation of the Rossetta probe that the European Space Agency will send in 2003.

But their research is not easy. In the case of asteroids, due to their rocky character and their ability to traverse the Earth's atmosphere, many of them have been analyzed in laboratories. The comets, being of ice, form spectacular stars of rain but barely leave evidence on Earth. However, since the 1980s, world space agencies have launched a series of missions to study asteroids and comets more closely.

The NEAR probe that recently settled on the asteroid Eros was on everyone's lips. Within two years, the European Space Agency (ESA) will send the Rossetta probe to Jupiter to perform the X-ray of the 46P/Wirtanen comet. He will travel 9 years to get there and then turn for two years around the comet.