Working under the sea

High pressures, low temperatures, salinity, strong water currents and darkness are the greatest difficulties to operate on the seabed. Technological development to address these problems is one of the few existing ways. People's interest in this issue has been accentuated since 1985, when the Titanic was discovered. The Titanic was discovered 4,000 meters from sea level through collaboration between French and Americans. Taking advantage of the high-definition French SAR sonar, an area three times greater than Paris was explored in the Atlantic Ocean. The American tugboat Argo discovered the boat through remote control television and the boat Angus took pictures. 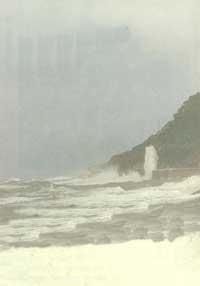 Geologists are very interested in the floorings and mineral deposits of the seabed, especially in areas with diverse metals and in mineral complexes related to recently discovered hydrothermal currents. Suppose you want to geologically explore the seabed at 6,000 meters deep. This depth of reference is due to the fact that the equipment used to work at this depth can be used in 97% of the surface of the seabed, that is, in two thirds of the terrestrial surface.

The first thing to do to explore a part of the ocean floor is to know the depths of the different points of that part. To do this, a sound probe is used that is found in the same boat and then, by lateral recognition sonar, the topography and nature of the stony or uniform seabed is determined. Lateral reconnaissance sonars are normally placed under the chopa of the laboratory vessel. The UK Institute of Oceanographic Sciences designed a sonar for lateral exploration called GLORIA. When the boat has a speed of eight knots, said sonar can travel in a day 10,000 square kilometers of seabed. GLORIA easily detects submarine volcanoes and hills hundreds of meters high. 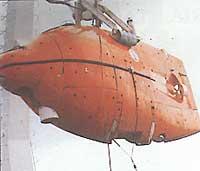 In
1981 the Epaularda dive was presented. At 6,000 meters deep you can travel up to 15 km of seabed in 12 hours. He has taken millions of photographs in the Mediterranean, Atlantic and Barbara.

For more precise detection, for example, with a resolution of one meter, the French institute IFREMER developed the SAR sonar. This sonar explores a strip of land 1.2 kilometers wide at a speed of 2 knots, that is, an area of 100 square kilometers a day. The boat carrying Sonarra is a trailer that navigates very close to the bottom of the sea to detect objects of few meters. Sonarreta information becomes a mosaic map through data processors.

The next step in geological exploration would be to investigate the images taken with a television or camera located about ten meters from the bottom of the sea, with a resolution of up to one centimeter. Because the cameras are located at the end of a multi-kilometer-long cable, their availability is considerably limited. For this, the independent and unmanned deep fleet would offer more advantages. This type of boat exists and is called Epaulard. It has a large capacity camera, moves with remote control and can make simple decisions such as avoiding obstacles.

Although the exploration systems mentioned in the previous lines are slow (they can cover approximately one square kilometer a day), they are able to operate 24 hours a day, so in many cases they can be economically more interesting than manned boats. Manned boats are especially interesting when the seabed shows great ups and downs or when working under the sea. 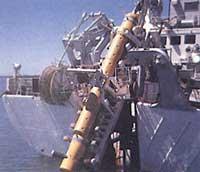 One of the manned ships that can operate at 6,000 meters depth is the Nautile of the ifremer. Operating since 1985, the crew consists of three people. Light nautical, 18 tons, can be rectified by a small boat and has two remote control manipulators. It has a hammer drill for rock, a piquillo, a water and waste sampler and a cable cutter.

Since the early 1980s, a quarter of the world's oil comes from areas of continental platforms. The oil industries of the sea, to work under the sea, both by immersion and by manned boats or remote control, have led to the evolution of the new systems. 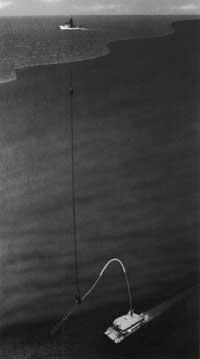 The company GEMONOD uses the propelled car seen in the image to extract metals from the seabed. The vehicle can work at 6,000 m depth and pumps the material from the surface delivery pipes.

Due to the sea pressure that divers bear, their work is mainly based on two methods: on the one hand, the immersion with air, which allows to descend to a depth of 50 or 60 meters; and on the other, the immersion with gas mixture, so that divers can live in a week or two pressure interval. The latter reach 200 or 300 meters deep. The record reached to date is 1977. A porrón descended to 501 meters deep.

The higher the desired depth, the higher the cost of immersion. The diver is an important element in maritime tasks, but at depths above 150 m, due to the different risks, it can hardly work.

In manned atmospheric systems, occupants work under normal pressure inside the vessel or in a pressure dipping suit. In the world there are 176 manned atmospheric systems. Saga is one of the best known in the field of underwater boats. This submarine vessel uses elements of Commander Jacques Cousteau's Argyronete submarine vessel, but with more modern technology. The saga can descend to 600 meters and carry up to 6 dives that can work 450 meters deep and 500 miles of land. This boat is not affected by bad weather on the sea or ice and is very appropriate to work in submerged structures and equipment.

The three-chair boat to work in deep water areas is about to disappear. It has recently begun to use single-seater boats, although in this situation the diver may have serious psychological problems. However, the diver's ability and maneuverability has not been achieved in remote-controlled guided vehicles.

The most common and widely used scuba diving is a small robot-shaped vehicle that moves with its generators. This vehicle is wired to a ship and receives power and orders from the cables. 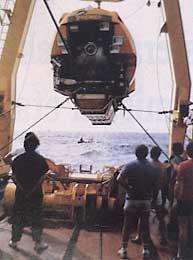 Nautile
Its weight is only 18 tons, but this dive can descend almost to all the seabed.

By the 1970s, the first divers were just a platform to test basic technologies. Since then more than 600 remote control subboats have been built in the world. In Europe in recent years more than 200 scuba diving have been built, mainly in the UK, Germany, Holland, Italy, Norway, Sweden and France.

Although divers were initially considered as auxiliary elements of divers, they are now increasingly accepted as independent elements for certain works. The most important work performed by underwater structures (platforms, pipelines, etc.) is an inspection.

In some projects, such as the French ELIT, the aim is to remove the silver cable and replace it with acoustic communication and control systems. The success of ECA’s PAP 104 mine detector has been such that hundreds of units have been built.

This dive of Saga-1 29
m length ended in 1987 in France. Designed to meet the needs of the oil industry at sea, it can reach 600 m deep. While six crew members live under normal atmospheric pressure, six divers are installed in a pressure cabin. They can work several days in bottoms up to 450 m deep.

Few remote control vehicles are prepared for heavy duty submarines. Some small vehicles are transported over tanks for cable and pipe inspection. Between France and the UK, the development of trenching machines and large cable loaders installed in the English channel for energy transport was promoted.

While it is difficult to accurately advance what role divers, divers and robots will play in the future, the use of remote control systems is expected to grow. In expensive, simple and repetitive tasks, remote control robots will gradually replace divers. Deep water work requires mixed systems, i.e. manned systems and automatic systems. However, progress in this field, as in most cases, will be associated with economic factors.