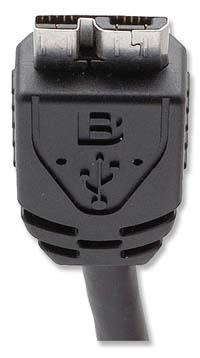 The third generation USB connection was presented in January at the Consumer Electronic Show, organized by the American organization CEA in Las Vegas. Companies such as Seagat or Western Digital presented products using the USB 3.0 connection. The previous version, USB 2.0, has dominated for eight years in the world's computers, but experts expect this new version to be replaced this year.

The biggest difference between both versions is the data transmission speed. The USB 2.0 version can transmit 480 megabits per second and the USB 3.0 version 4.8 gigabit, that is, it is ten times faster. For example, the 40 movies saved in DiVX format need 25 GB of memory and according to the advertising they have made, the new USB will transmit for about 70 seconds. The current USB takes about 14 minutes to do so and the first version 9 and a half hours.

To achieve this speed, the USB 3.0 version uses a new data and fiber optic exchange protocol. It is fully compatible with the previous version, but being based on different software and hardware, it only works on computers adapted to version 3.0.