The stone words of the Moon and people remain aloud. But not the scientist at the Johnson Space Center in Houston, Texas. This small group of scientists will tell you that the stones of the Moon have not revealed their secrets and that the image of the Moon as a result of the first research carried out is not entirely incorrect, but it is not complete. 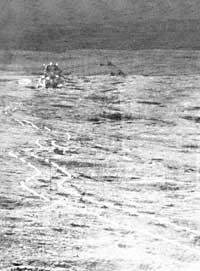 The Johnson Space Center in Houston houses most of the lunar material brought in six Apollo trips. The Center has two functions: storing material and researching. It contains lunar stones, earth, samples, sand and dust.

This warehouse was built for a concrete and concrete purpose, avoiding contamination of the samples. Being all or almost all contaminated on earth, the goal was not easy. Take lead as an example. In a single drop of welding lead there is more lead than the 382 kg of lunar materials collected. Lead, although scarce, is sufficient to calculate the age of samples.

Other more common substances can attack the purity of the lunar material. Oxygen can be one of these. Oxygen can react with the iron contained in Moon materials giving rust. Water can be mixed with other components forming a clay. And if by chance a researcher's rings infect the samples with gold, one of John Dietrich's managers tells us that "someone can light the golden fever on the Moon."

Initially it was thought to store the lunar materials in their original state (empty). Technically it was not possible. It was then decided to use normal atmospheric pressure. Nitrogen gas (inert and inreactive) is used for maintenance. Nitrogen would not contaminate samples.

The treasure brought by the Poles is analyzed in boxes filled with nitrogen and well closed. Attached to the glass walls of the boxes are rubber gloves coated with teflon. This way, researchers can manipulate samples without touching them directly.

Samples that have already been analyzed are stored in a warehouse. All samples, regardless of their final state, are collected in this warehouse. Each sample includes a detailed and detailed dossier. This dossier shows the analyses and tests that the sample has undergone. In the second warehouse are stored those that have not yet been analyzed and that are in full. 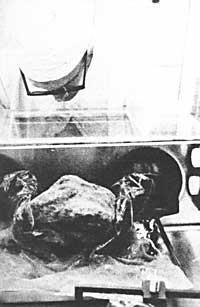 Some lunar samples are analyzed in the state in which they are found. However, when you have to break some, you proceed to sawing carefully and slowly with a stainless steel saw with diamond teeth. The saws are in nitrogen loaded boxes and the samples are transferred. All sawing steps are carefully photographed to record the initial position of each new sample. The head of staff, Doug Blanchard, said that "the sawing of a stone of four by five centimeters is a project for the whole month."

74% of the samples that brought the Poles remain intact, 3% are abandoned in other research centers, 5% has been analyzed and stored, 2% is used in educational works (exhibition, etc.) and 2% has been completely damaged by the use of destructive analytical techniques. The remaining 14% is kept at the Broaks base of the American Air Navy. Thus, if there were a deterioration of the Houston samples, there would be a legacy of certainty to continue the investigations.

While most of the material brought by Apollo is pending study and the information that has been extracted has not been exhaustive, the analysis of the materials of the Moon has shown that the ideas that exist about the origin of the Moon were too simple.

One of them proposes that the Moon was born from a fission of the Earth. A second proposes co-acceptance, that is, that the Moon and Earth were formed simultaneously in the same region of dust and gas. The third says that the Moon is a traveling body trapped by the gravity of the Earth. According to scientists, the capture theory is not very reliable, since very specific and concrete circumstances are needed. The difficulties of the theories of coacceptance and fission are based on the knowledge of the chemistry of the Moon. 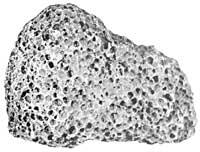 When molten volcanic stones are placed at low pressure, the gases come out violently leaving this porous structure. This basalt has gathered in the Mare Imbrium. It has a lot of iron and little aluminum compared to the stones of the Earth.

Isotopic dating, Earth, Moon and meteorites are the same age: 4600 million years. The surface materials of the Earth and the Moon (iron, aluminum, magnesium, calcium) are similar, although in different proportions. But if we compare the Moon with the Earth, the first has very few volatile materials, that is, low melting point elements such as cadmium, Indian, bismuth and zinc are scarce. Nickel and gold are also scarce.

According to Doug Blanchard, these differences indicate: That the Moon and Earth have not been formed by the same cloud of dust and gas and that the Moon has no fission origin of the Earth. Nevertheless, the Moon could not lose the volatile elements at that level. Moreover, similarities in surface composition make foreign bodies unclear.

Current theories about the origin of the Moon combine capture and fission to respond to the problem. It is proposed that at the beginning of Earth's history a planetoid collided with our planet. As a result of this shock the Earth launched numerous surface materials. At the time this occurred, heavy materials were stacked in the Earth area and the light ones were already on the surface. The Moon was formed with the management of these waste. All theories are variants of this basic idea.

These theories are the result of the continuous analysis of the samples provided by Ápoles. Houston geologist Graham Ryder says: "If we look at the stones, it is clear that 4,400 and 4,600 million years ago something happened that melted half of the Moon." The Moon separated from the Earth and materials rich in aluminum remained on the surface on an ocean of magma.

The next phase in the history of the Moon, 3.9 million years ago, is marked by a large bombardment of meteorites. This completely changed the surface of the Moon. Indirectly, the Moon allows geologists to know the age of planetary bodies. The surface layer of craterization of the Moon can be taken as a reference to calculate the age of the craterized planets.

3,300 or 3,600 years ago vulcanism began on the Moon, creating soft seas (no roughness). This was the last important event in the geological history of the Moon.

In the evolution of the Moon there are still many unanswered problems. There are masks (supercompact regions related to the seas). These have a radius of 200 km and a concentration of masses too high, which make the gravity field 9.1 times greater than in the surroundings. Nobody knows if they are depressions poured by the mascon with very compact lava or remains of impact bodies. 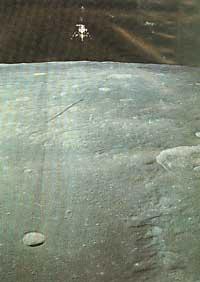 Another curiosity of the Moon is the location of its mass center. The mass centre is 2 km from the Earth in front of the geometric centre. In addition, the outer layer of the Moon on the opposite side of the Earth has a thickness of 60 km, while on the hidden side is 100 km. In past abusive or eonic seasons, the Moon has had enough time to put its heaviest face looking at Earth.

David Mckay, another researcher at the center, studies the varieties of the Moon soil (regolite). He wants to know the nearby history of the Sun. Find the traces of the energetic particles of the solar wind on the stones. The old lunar stones, once on the hill and buried for millions of years, have traces of their discovery. These fossil footprints can show what the sun's activity was in the past.

However, another of the main reasons for continuing the studies of lunar stones is that of the Moon. Mckay states that the time has come to resume the idea he had left behind the Poles of returning to the Moon forever. The analysis of the samples shows us the resources of the Moon and how to build the base of the Moon that will open the way of the colonization of space.