The communication systems by image and/or sound that use human sight and hearing have evolved notably in the twentieth century. Throughout the twentieth century. Flat televisions of all sizes and pocket sound systems with capacity to host thousands of songs are very widespread among us. As for touch, however, until the 1990s, no remarkable step has been taken in the devices that transmit information through touch, and if we compare it can be said that we are in the era of black and white television or of the turntables.
Haptic or tactical exploitation
01/04/2009 | Zabala Larrañaga, Xabier | Industrial Engineer

(Photo: Microsoft)
The information we can receive through touch is very rich. In fact, if the touch is lost, many of the actions we perform without realizing it would be impossible. Have you tried walking with the tinged leg? Or mooring the laces of the footwear after using the snow?

Without tactile capacity, the movements of the body measured and the interaction with the medium become almost impossible. Furthermore, if the ability to feel heat and pain is lost, many situations that would otherwise not cause damage become dangerous.

Devices that transmit information through touch are called haptic devices and, according to forecasts, XXI. In the twentieth century they can revolutionize the known systems of communication between the human being and the medium.

As for etymology, the origin of the word "haptika" is found in the Greek, where the word haptesthai encompasses everything related to the tactile sense.

If we would like to combine the meaning of Haptika in a single sentence, we would say: Haptika is a science that studies the research, development and use of touch communication systems between the human being and the medium.

In haptic systems we can distinguish three fundamental components: user, interface or haptic and medium device. 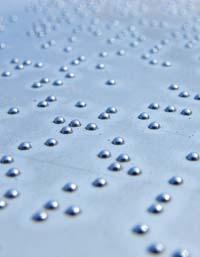 Today, the Braille language is the most well-known tactical media.
lissalou66

2. The haptic interface is a mechanical device that serves as a link between the user and the medium. The sensors located there inform the system of the movements of the device while the actuators act on the user by touch, transmitting haptic information.

3. As for the environment, in general, haptic systems work with virtual environments. These environments are presented by graphical interfaces, that is, screens, video projectors or stereoscopic helmets. The image that the user will see is built using software and the virtual tool he uses. Likewise, depending on the virtual movements and interactions of this tool, the forces to feedback the user are calculated.

However, more and more haptic systems are operating with real means. In these cases, the tool used by the user is real and can be handled by the user or remote. The user feedback forces depend on parameters measured in the instrument itself or in the environment.

Main features of the haptic devices

Most of the touch interfaces available today do nothing more than read user movements and the user receives audiovisual information from the environment. 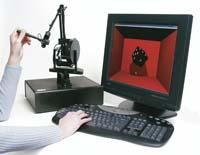 Additional parts of the haptic systems: user left, haptic device in the middle and middle right.
Sensable Technologies, Inc.
However, haptic devices, in addition to reading user movements, are able to generate forces and sensations that allow two-way touch interaction with the user. Therefore, the user can receive information not only audiovisual, but also touch.

Making a reading of user movements is a highly studied field, but it is not a baladí thing to transmit information to the user through touch. To meet this challenge, knowledge of areas such as robotics, computer science, system control, physiology or psychology is necessary.

Taking advantage of these areas of knowledge, haptic devices must have a main feature to ensure their proper functioning: transparency. A haptic device must meet two conditions to be considered structurally transparent:

- The user should only feel retro-powered theoretical forces, that is, the mechanical characteristics of the device cannot cause changes in the retro-fed forces.

In order to meet these two requirements, a good knowledge of mechanical design techniques is necessary. If, by chance, transparency in the performance of the haptic device is not guaranteed, the interaction between the user and the medium can be distorted.

The inertia, the friction, the rigidity, the slack, the isotropy, the type of drive, the degree of force of the same, the precision of the sensors, the balance of the forces of gravity, the safety, the ergonomics and the cost are many the characteristics to take into account in the design of the haptic devices. Apart from the last three, all others have a direct impact on transparency. 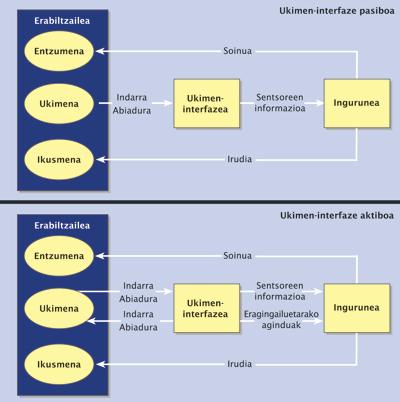 It is necessary to achieve a balance between all these characteristics, since the improvement of a characteristic can mean a worsening of another. For example, to achieve high stiffness, the inertia of the mobile elements of the device can be increased. The means to avoid it are the use of high rigidity and low density materials and design optimization, ensuring a reasonable cost of them.

uses for the use of

Sometimes it is necessary to introduce robots in strange or dangerous environments and users remotely direct them to avoid dangerous situations. In these circumstances, it is useful that the user receives a tactile feedback of the robot's works or actions, in addition to audiovisual information. Clear examples of the situations described are nuclear power plants, autonomous submarine and space vehicles, as well as robots for detection and deactivation of explosives.

In the image, the Da Vinci Surgical System. The surgeon, based on the three-dimensional image, directs the operating robot. The robot repeats the surgeon's movements on a smaller scale - and thus increases the degree of precision. The surgeon receives tactile feedback using control levers.
Intuitive Surcial, Inc.
In some uses of remote control, such as microsurgery, the most important thing is precision. The precision of the human hands is insufficient and it is necessary to use robots capable of repeating the movements of the doctor on a smaller scale and with precision. In addition, it helps the doctor to reflect the strength interactions the robot has with the patient, using the tactical feedback that the haptic device can offer.

In other uses it may be interesting to reflect user movements on a larger scale. Haptic interfaces allow the user to direct in their environment, with great ease, work areas of different sizes through a fixed and limited work area.

The goal of these systems is to train users in virtual environments so they can perform similar exercises in the real world in an orderly manner. The environment is created by computer and the haptic interface is designed according to the type of exercise. By retropowering through haptic interfaces the forces that the user would feel in reality, a high degree of realism can be achieved and, at the same time, user errors have no fatal consequences in reality.

Examples of these systems are medical training systems or vehicle simulators for military and civilian purposes.

The haptic devices allow to analyze models designed by computer without the need of models. This allows you to save time and expenses, correct errors and previously perform a simulation of assembly and maintenance. These exercises can avoid many problems and design changes that can appear later. 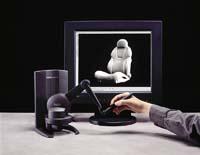 The powerful leisure industry has become in recent years one of the most important fields of application of haptic systems. So far, video games and virtual reality systems have used audiovisual communication as a response to user actions. On this path, however, it is difficult to take great steps and if you want to involve the user even more in games it is necessary to address the possibilities offered by touch.

In the face of the future, important advances are expected from the hand of the main suppliers of video games. At present, the new haptic devices are in development, with a degree of increasing realism of the sensations they generate and affordable prices in the short term.

Haptic devices have also reached the automotive industry. The cars offer more and more additional elements (radio, handsfree phone, air conditioning, browser, suspension adaptation, etc. ), and drivers are immersed in different screens and menus each time to correct them. For this reason, motorists have begun to use haptic devices to facilitate the work of the driver and prevent less attention being paid on the road.

On the other hand, the main manufacturers are working on the design of haptic pedals. A pedal of this type would feed the forces to the driver as prescribed by the speed control system or assisted brake.

The iDrive system created by Immersion for the German BMW car allows to tactically correct most of the additional functions of the car without the need for the driver to remove the view from the road.
BMW

It is difficult to predict what will be the future trajectory of haptic systems and the speed of development of this technology. In fact, who could foresee the XX. Flat digital televisions of 100 inches in the middle of the century?

However, taking into account the wide range of uses of the haptic systems and the remarkable virtues, it would not be an absurd affirmation to affirm that the human beings and the machines and interfaces that surround us are in the antechamber of a revolution.

Introduction to Haptics
By touching objects in daily tasks, they continuously feed us with strength and feelings. Touch allows us to detect and internalize stimuli of mechanical, thermal, chemical and electrical origin.
The senses of touch combine cutaneous touch and deep touch or quinesthesia. The cutaneous touch is manifested in the nerve ends of the dermis, provided that the magnitude of the stimuli is greater than the threshold of excitation of the end of the nerve; it is transmitted through the sensitive nerves to the nerve cells of the spinal cord, from where it passes to the sensory zones of the brain, where it becomes a sensory impression. The deep touch, on the other hand, is manifested in the muscles and joints and, together with the equilibrium system, provides information about the location, movements and weights of the body parts.
Thanks to touch and all other senses, the human being is able to perceive the medium in one way or another. Through touch, however, in addition to perceiving the environment, we are able to transform it.
The haptic systems, taking advantage of this capacity and the characteristics of the aforementioned touch, and artificially generating forces and sensations that will collect the superficial and deep tacts, allow the two-way communication between the user and the medium.
Bibliography Bibliography Bibliography
Iron, G.:
Force and touch feedback for virtual reality, Wiley-interscience, New York, 1996.
Goldstein, E. B. B.
Sensation Perception, Wadsworth Publishing Company, 1999.
Kenshalo, D. R. R.
The Skin Senses, Springfiled, Charles C. Thomas, Illinois, 1968.
Turiel, M.:
Mechanics in Haptics, Donostia, Tecnun, UN, 2000.
Savall, J.:
Mechanical Design of Haptic Devices of Great Working Space: • Donostia, Tecnun, UN, 2005.
Katzky, R. L.; Lederman, S. J. et al. :
"Procedures for haptic object exploration vs. manipulation", in Vision and action: Control of grasping: (1990), 110-127.
Zabala Larrañaga, Xabier
Services Services Services
252 252
2009 2009 2009 2009 2009
Security security security security
041 041 041
Awards; Engineering; Technology
Dossier dossier
Services Services Services 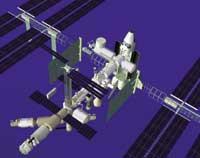