To continue dancing in the frantic peace of the night 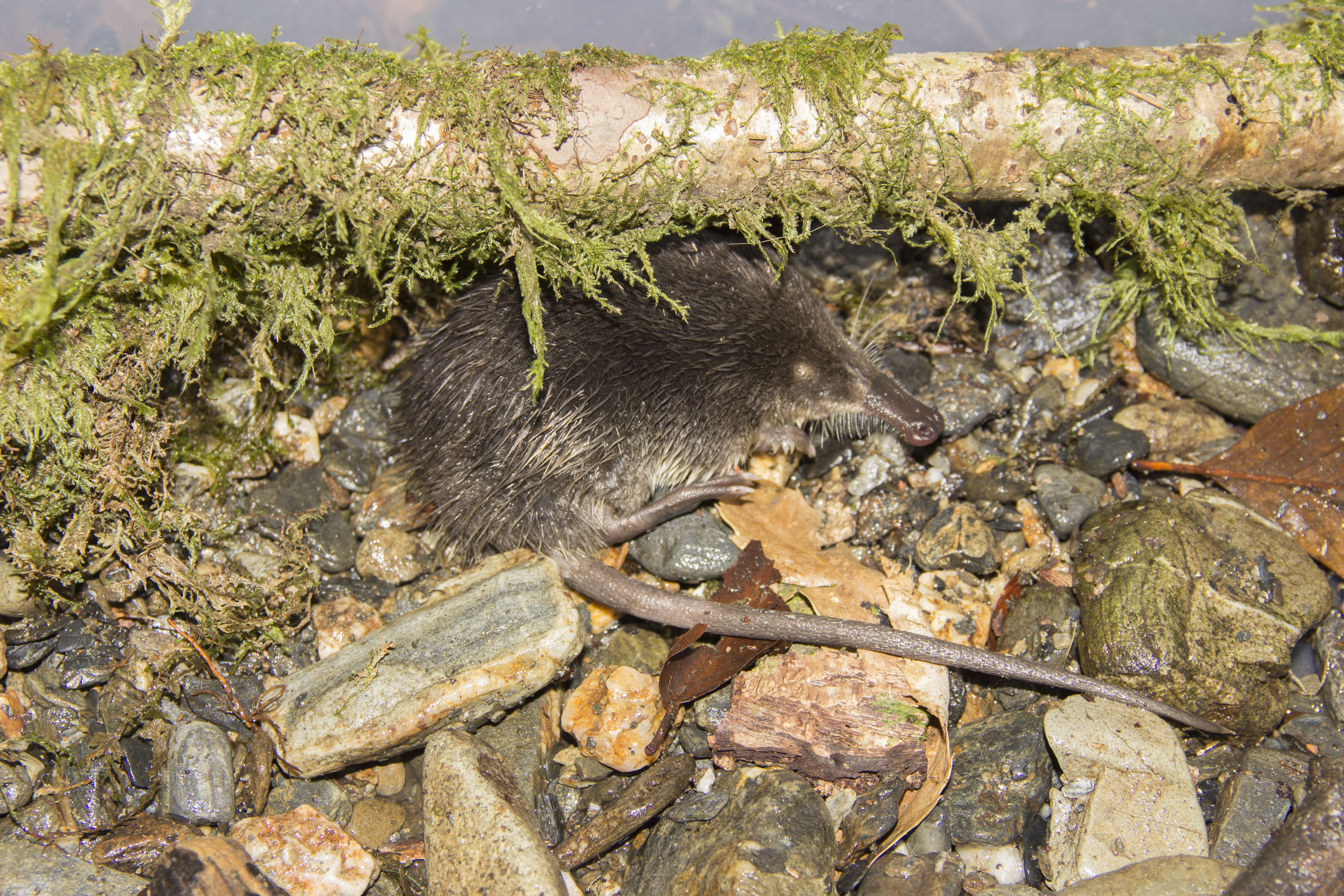 [Desman of the Pyrenees or topo of the water (Galemys pyrenaicus) in Elama]. Ed. Amaiur Esnaola Illarreta

In the hidden streams of the forest, when the sun sets, the view is turned off and the rest of the senses are danced. Desman wakes up frantically every night with the protection provided by darkness, at the rate of Beethoven's most intense symphony. It comes out of the cracks on the bank of the river that serves as a refuge, immerses itself in cold waters and goes up and down the river in search of food and breeders, until the dawn is consolidated in its dark shelter.

The Pyrenees (Galemys pyrenaicus; Figure 1) is a clever swimmer perfectly suited to the currents of the cold mountain streams. His lifestyle is frantic, since with the simple entrance to the water he starts to lose heat and needs a constant diet to maintain body temperature. You have to eat twice or three times your weight every day to be able to meet the energy demand, but this is an arduous task for this insectivore that only paste small bugs that live underwater.

Desman can be the last representative of a lineage adapted to resist ancient glaciations and to live in glaciations, endemic in the north of the Iberian Peninsula and the Pyrenees. The latest research has estimated that its area of distribution has been reduced by more than 50% in the last decades and is therefore in danger of extinction. The reasons behind this decline are unclear, but human activity is the main cause. 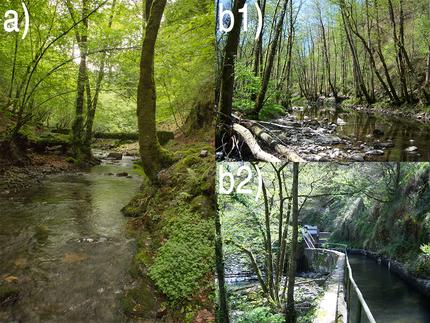 Some aspects of the ecology of desman were unknown at the beginning of the thesis. In fact, the nocturnal and evasive nature of the species makes it difficult to study its biology, whose observation in nature is practically impossible. The impossibility of seeing and following the water buffer also hinders the design of conservation measures. The main objective of my research has therefore been to address this lack of knowledge and achieve knowledge on key issues for conservation. To do this, we work on two different streams (Figure 2), one in excellent conservation status (Elama, Urumea) and another affected by water extraction systems for hydroelectric activity (Leitzaran, Oria).

When I started the thesis, we didn't know how desman used his living space. Previous studies analyzed the influence of environmental factors on the distribution of desman, but did not determine the selection of fodder habitats within their areas of life. However, for the conservation of the species it is essential to know what the preferred habitat is, and for this we designed the first section of my thesis: the study of spatial ecology. 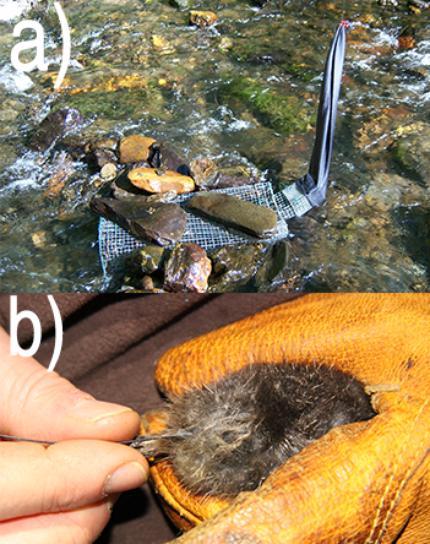 3. [Image]. [Catches of the length and follow-up by radio and telemetry]. (a) a trap used to catch the lengths, and (b) a radio emitter stuck to the back of a mantle. Ed. Amaiur Esnaola Illarreta

In total, we hit and followed 15 and 16 confines in Elama and Leitzaran respectively, through the tools of radio telemetry that allowed us to “see” in the dark (Figure 3). The nocturnal activity points were assigned to one of the three habitats: fast, calm waters or wells. The movements outside the tail of this little mammal were completely irregular, really spontaneous. Although his life was developing in a river area of hundreds of meters, most of his time was spent in specific areas of a few meters. I swam fast to move for or against the current. It could quickly take hundreds of meters to a nice stream of water from the shelter, and once it arrived, it could spend hours on it, frantically recording the bottom sections. These long stays in these “hot spots” occurred, in most cases, in water streams.

To measure the habitat selection of desman, the use of habitat was compared with the availability in each stream. So we saw that desman prefers streams of water in the calm water zone and charcas. The results indicate that this selection was stronger in the Leitzaran stream affected by water abstractions, suggesting that the least preferred habitats could be even worse.

However, radio telemetry did not clarify that habitat selection of desman occurred due to the availability of fodder in fast water or for another reason. To find a response to this, it was essential to design the second part of my thesis, the study of simultaneous trophic ecology.

Choice of restaurant or menu?

As already mentioned, it is practically impossible to observe desman in nature, so in order to determine its attachment to food it is essential to collect excrement and analyze the remains of prey. However, finding its excrement in the river is not an easy task, as its functions are performed in hidden places. However, a day of sampling gave us the chance that in the long run he loves to make stools in artificial places (Figure 4). Thus, the analysis of the dejection stored in the kaka allowed a writing study in fine taxonomic resolution not achieved until then. 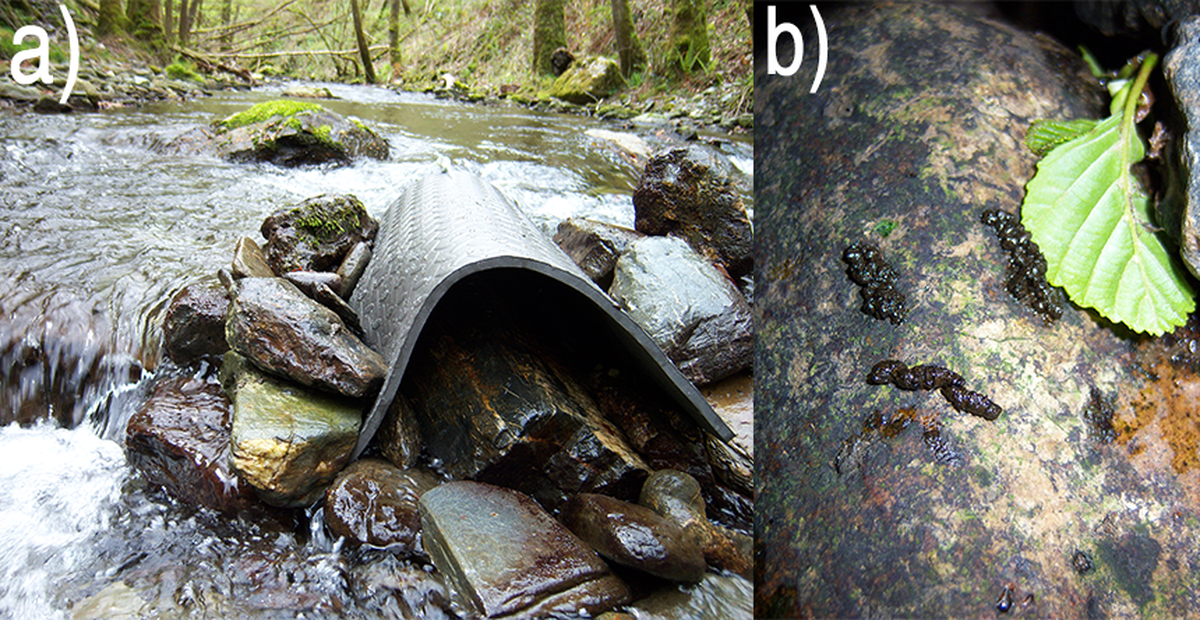 4. [Image]. [Analysis of the diet of the snout: a) the artificial drawer designed to collect the dejection, and b) the excrement]. Ed. Amaiur Esnaola Illarreta

To identify prey (aquatic invertebrates) through feces, we use molecular DNA metabarcoding technique. Molecular techniques are, precisely, a valuable instrument for the study of diets of endangered or fleeting species. However, these novel techniques require the development of a different methodology for each case. Therefore, first of all, we conducted a pilot test to refine the PCR amplification of both prey and predator.

Based on the analysis of forage selection, to identify the catches consumed and describe the diet, a DNA analysis of 94 stool samples was performed in each stream. To describe the availability of fodder, 10 samples were collected from each habitat type (in rapids, calm waters and wells) of each stream using a Surber type network (Figure 5a). The collected bugs were identified in the laboratory (Figure 5, b and c). 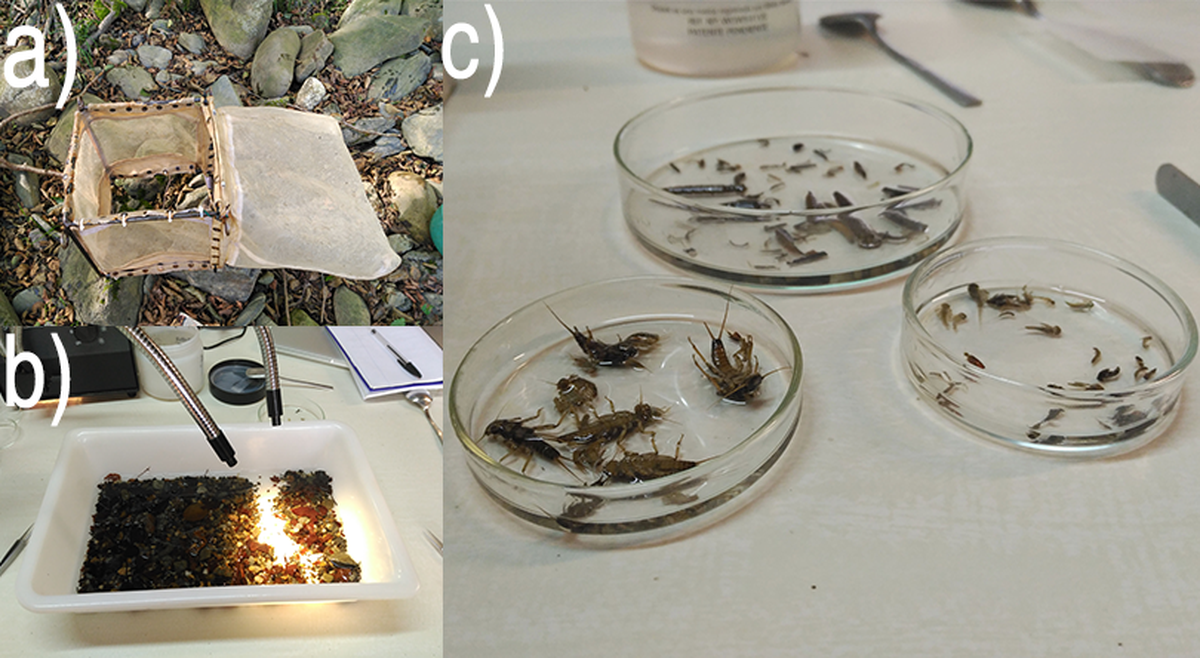 5.- Image. Characterization of forage availability: (a) Surber network used for the sampling of invertebrates, (b) treatment of laboratory samples and (c) identification of invertebrates — bugs — forged from desman. Ed. Amaiur Esnaola Illarreta 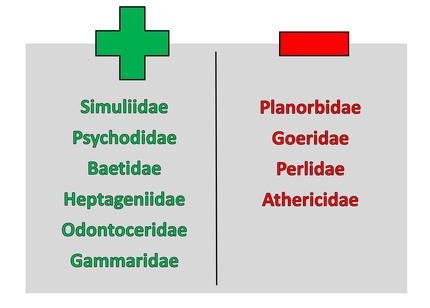 The availability of fodder and diet varied from one stream to another. The forage selection of desman (diet versus availability) also varied according to the river, crazier—more selective—in its best ecological status (Elaman) and more opportunistic in its worst preserved (Leitzaran). This analysis of forage selection allowed us to know which catches are selected positively or negatively (Figure 6), but it was not possible to explain the predilection of desman by the water current. In fact, we were not able to prove that habitats were different from each other from the availability of grasses.

The nominal selection analysis has traditionally compared the forage consumed with that available using taxonomy. Predators, however, do not understand it by taxonomy: they are based on other characteristics when choosing fodder. So we decided to reanalyze the above data, making a second approach to music tastes. On this occasion we focus more on the biological characteristics of prey than species, on the possibility of explaining habitat selection through their preferences for the characteristics of prey and whether the preferred characteristics were different from river to river. To infer the interest in the characteristics, the available invertebrates were compared with those consumed, but on this occasion they were based on nine biological characteristics (Figure 7), of which 4 were probably affected by the type of habitat (water stream, well or peaceful water) and 5 were considered independent of the habitat. 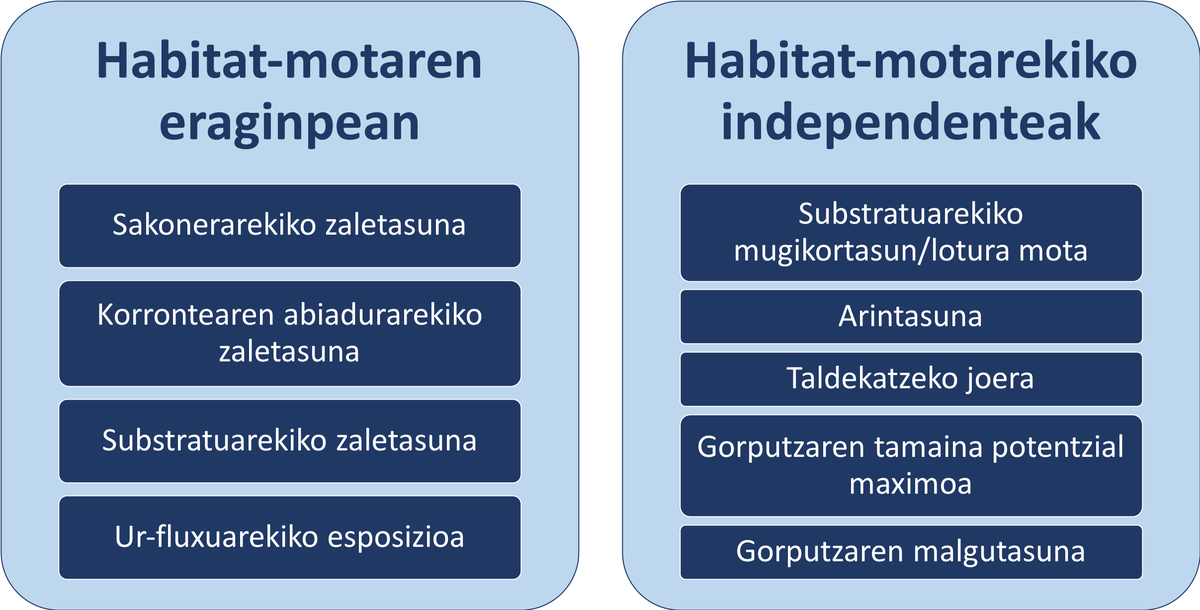 Despite differences in the availability of invertebrates between rivers and habitats, the diet of desman and forage selection were very similar in both streams (Figure 8). Some of the preferred features may simply reflect the characteristics necessary for dams to live in currents, but others may reflect the selectivity criteria of desman regarding prey profitability.

Most of the preferred catch categories were slightly more numerous in water streams, and it seemed that on this occasion we would be able to talk about different habitats depending on the availability of grasses. However, the differences between habitats were small, varied from one stream to another, and we concluded that the water stream is not selected by the local menu, but by the environment. In fact, some studies have suggested that for desman it may be easier to cope with buoyancy by taking advantage of water streams and being stuck to the bottom to hunt and protect from predators. 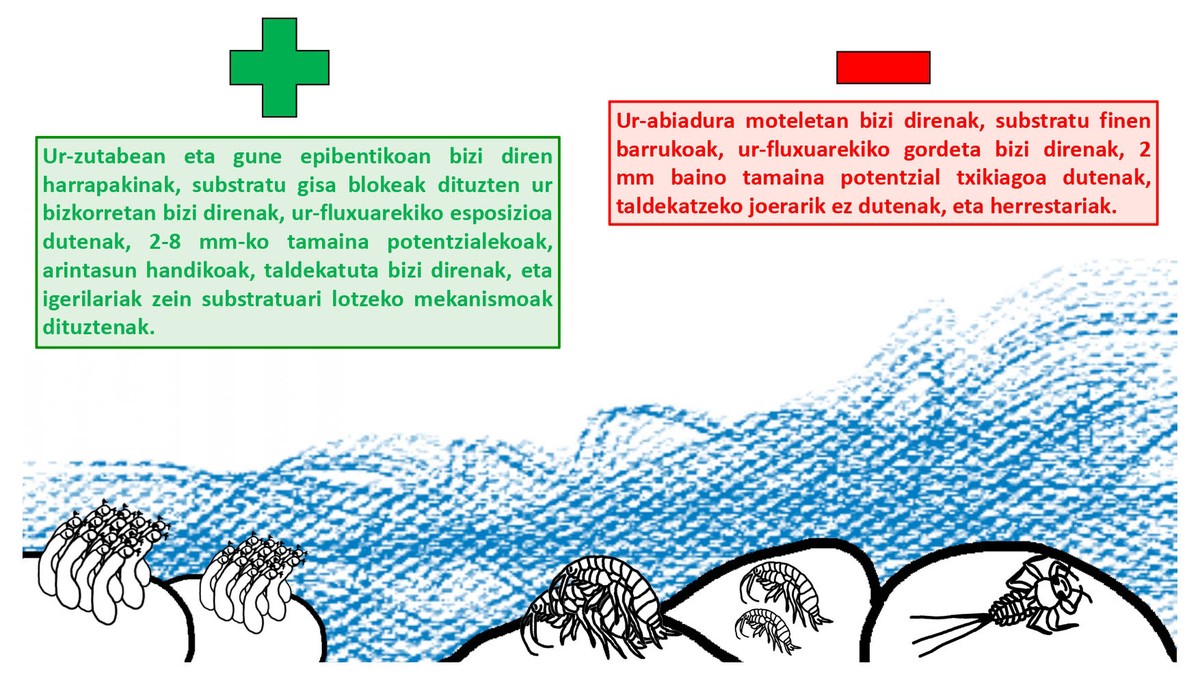 8. [Image]. [Forage selection of a desman of biological characteristics: positive (green) and negative (red) traits]. The ones that appear on the drawings are some types of prey that prefer the long ends. Ed. Amaiur Esnaola Illarreta

At speed, in search of peace

My thesis has shown, broadly speaking, the need for speed which is often referred to as the Pyrenees' desman, which is essential for his survival. Therefore, and due to its tendency to select specific prey, it also highlights its character as a specialist animal. In this context, the importance of designing river ecosystem management according to the needs of desman has been highlighted.

Unfortunately, he may be dancing the last notes of his symphony, the long hocic, because his population is in the last few days. Although at the beginning of the thesis we were without a way out, we now know that current activities that decrease the availability of streams, especially water extractions or water deviations, have a direct impact on the habitat quality of this species: both the construction of obstacles in streams and the reduction of the flow rate and the speed of the flow of water in the dried sections have a direct impact on the availability of habitats preferred by the desman. Therefore, this type of research seems to give the impression that in the end we have something mature. It is in our hands, therefore, to avoid the tragedy of Beethoven's ninth symphony and to believe in the survival of desman so that he continues to dance in frantic night peace. 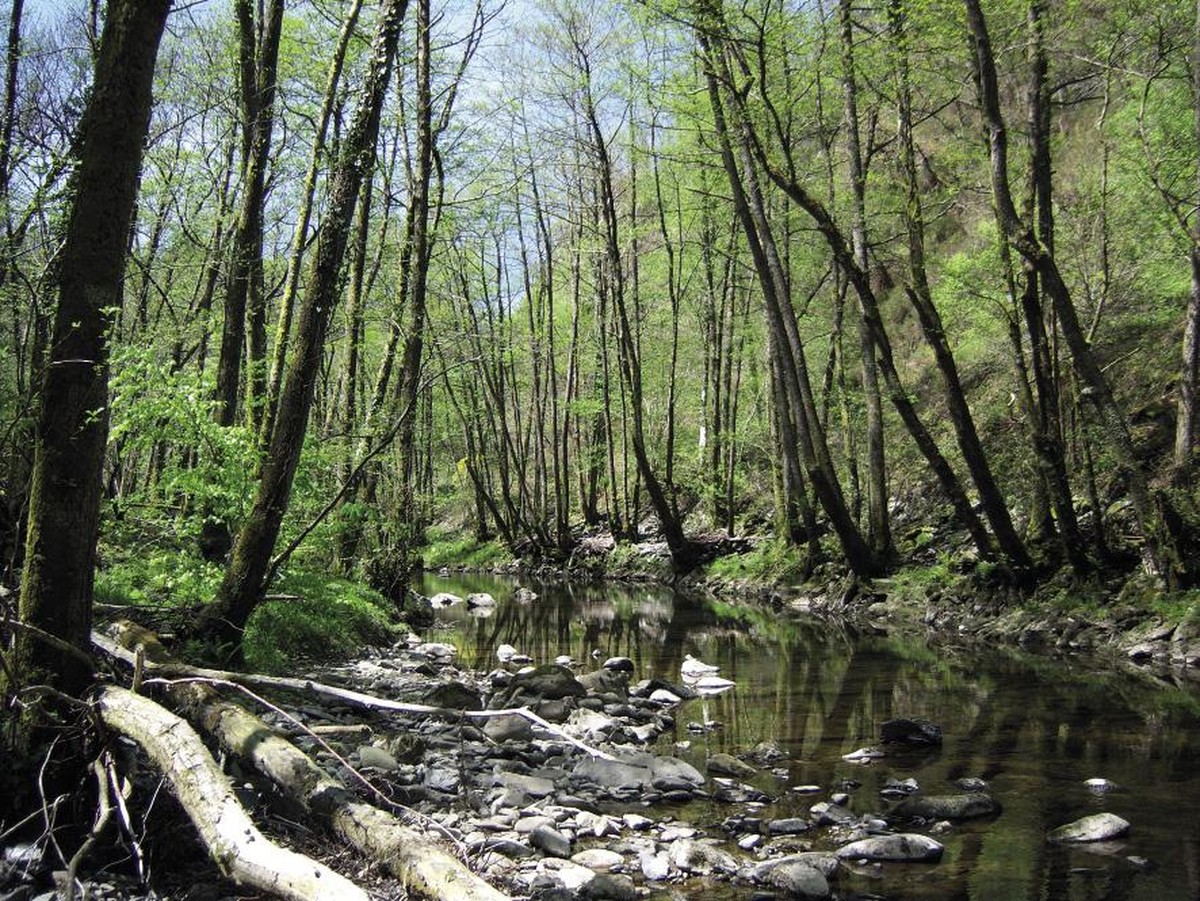 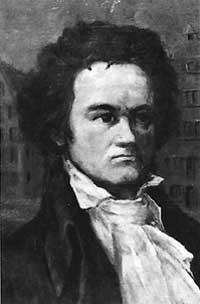