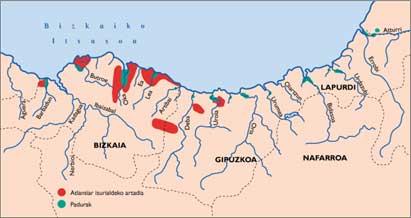 Before conducting an individualized analysis of the marine marshes of Bizkaia, it is interesting to mention the peculiarities of the hydrographic network of this territory that directly affect the rías.

The rest do not have significant differences with Gipuzkoa, since the Nerbioi, Agú and Barbadun rivers can be compared with any Cantabrian river that is born in the dividing between the Atlantic and Mediterranean slopes. Let us now analyze each of these rías.

This river, only 20 kilometers long, which is born on the northern slopes of Mount Oitz, flows into the town of Ondarroa, one of the main fishing ports of the Basque Country.

Ondarroa. The Artibai River only maintains a small marsh footprint. It also threatens the construction of a new road.
M. Estonba

Due to the narrowness of the mouth, from the beginning the man settled on marshes and dunes, due to the spectacular growth of the port and the village during the last years, the dunes have been completely destroyed and reduced to the minimum marshes. These last vestiges are also threatened because they want to pass the new variant of Ondarroa.

As in the case of Deba, conservation and, as far as possible, the recovery of these last remains should be a priority, as they are an important part of our ecological heritage.

Like the previous one, the Lea River is born on the northern slopes of Mount Oitz and, after traveling about 20 kilometers, flows into the wonderful bay of Lekeitio, after crossing the imposing ridge that forms Mount Lumentxa, full of holm oaks.

Despite the similarity between the birth and the travel of the Artibai and Lea rivers, they are quite different in the rías, since in the case of the Lea the estuary has not undergone sudden changes. As a result, we can affirm that his marsma is one of the most beautiful and at the same time unknown of Euskal Herria.

However, although this marsh is included in the Catalogue of Natural Enclaves of the Basque Country prepared by the Deputy Minister of Environment of the Basque Government and that according to the Territorial Sectoral Plans of Wetlands is a wetland of protection, the Provincial Council of Bizkaia is building the Lekeitio Sanitation. Amazing!

The Oka River, which rises on the slopes of the Bizkargi and Oitz mountains, creates between the villages of Gernika and Mundaka an extensive and wonderful estuary known as Urdaibai. 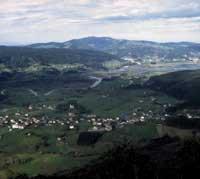 Surprisingly, this estuary, contrary to what has happened with the rest of the Basque Country, has maintained its natural structure, and its waters leave the sea without any channeling, forming great meanders in the silts and sands.

Due to the low human incidence, the Urdaibai marsh, at least to date, in addition to having the greatest representation of halophyte and bioverse plants, offers us a high density of birds and a great diversity, especially in times of migration.

But the ecological value of Urdaibai is not limited to its marsh, in the mountains surrounding the estuary (Atxerre, Ereñozar, etc.) The most widespread and best preserved holm oaks of the Atlantic slope of the Basque coast.

The best representation of holm oaks on the Atlantic side of the Basque Country remains in the mountains of Urdaibai. In the image you can see Mount Ereñozar.
M. Estonba

Thanks to all this, in Urdaibai, in an area of few square kilometers, there are numerous well-structured ecosystems: marsh, holm oak, campa, aliseda, marine cliffs, etc. ; this helps us to understand the causes of the immense biodiversity of the estuary.

All these values, as well as the work and pressure of the environmental groups against the wild project that the Provincial Council of Bizkaia prepared for the management of the estuary in the 70s, made that in 1984 UNESCO declared Urdaibai “Biosphere Reserve”, giving a great impetus to the conservation of this ecological treasure of Euskal Herria.

However, the declaration of the Biosphere Reserve did not involve the implementation of conservation measures, while numerous aggressions and threats threatened the reserve, such as the increase of cars and constructions, dredging, drying, uncontrolled marshaling, poaching, etc. It was easy to detect, therefore, the need for an ordination law to maintain this wonderful environment. However, it finally arrived.

Urdaibai is the municipality with the largest extension of marsh.
M. Estonba

At this time, although not everyone likes it, the Plan of Use and Management that prescribes the law has been approved, in which the use of the resources of the reserve is regulated by different protection figures.

It should be noted that in 1992, the RAMSAR Convention, which aims to protect the most important wetlands on the planet, decided to include Urdaibai in its list, granting this wetland new international approval.

The main problem of the estuary that forms the Butron River in the areas of Gorliz, Barrika and Plentzia is its proximity to Urdaibai, whose fame has shaded the estuary of Plentzia, making its high ecological value almost unknown.

Ria del Butrón. Txipio Valley. This second wetland in Biscay is endangered by the construction of a sports pier.
M. Estonba

Thus, after Urdaibai, taking into account the situation of the rest of the rías of the Basque Country, that of Plentzia should be placed in front of Txingudi. The reduced population density of this region, although it has not prevented the last stretch of the mouth from being channeled, has maintained large areas of marsh (Junkera, Meandro de Isuskiza, etc.) and some areas that, despite having lost the influence of tides, have recovered the characteristics of halophyte wetlands, with the aim of being useful for agricultural exploitation.

Among the latter, the Txipio valley stands out. At present, the construction of the Plentzia-Barrika road, an extensive and wonderful wetland that lost its connection to the estuary, has, unfortunately, in recent months a great fame, as in Zumaia, for the construction of a sports pier.

Ria del Butrón. Surroundings of Isuskiza. In this estuary you can still see places as charming as this one.
M. Estonba

It is not necessary to insist, but from an ecological point of view it would be barbaric to build such an infrastructure in Txipio. In addition, other socio-economic and sedimentological aspects question the feasibility of this project.

Also in this case, hope comes from the hand of the Deputy Minister of the Environment of the Basque Government, since in the Catalogue of Natural Barrenderías of the Basque Country prepared by it and in the Territorial Sectorial Plan of Humid Areas, especially the marsh of Plentzia and the valley of Txipio, appear as zones of strict protection. We want rationality to prevail on this issue and that Txipio does not disappear.

After crossing the rivers Nervión, Álava and the west of Bizkaia and the river Ibaizabal from south to northwest of Bizkaia, converge in Basauri forming along 30 kilometers the estuary of Bilbao that constitutes the most important port and industry in the Basque Country.

Less than 100 years have passed between these two photographs showing the end of the Ría del Nervión. There are plenty of comments.
M. Estonba

The graphic testimonies provided by history show that the marsh originated by these two rivers, and to a lesser extent by the rivers and streams that flow into this estuary (Gobelas, Cadagua, Galindo,...) could only be compared to that of the Atturro, whose ornithological abundance and, in general, its ecological value was exceptional.

Unfortunately, of this peculiar ecology, today there is no trace, since the development of the steel industry linked to mining, in this last century, has generated a huge flow of population and self-feeding industry. Consequently, human occupation has been total, turning the estuary into a channel.

The massacres carried out in the Ría de Bilbao should show our respect for our ecological heritage, and especially for the rías of the Basque Country that to date have preserved their natural values.

Less than 100 years have passed between these two photographs showing the end of the Ría del Nervión. There are plenty of comments.
M. Estonba

Barbadun is the westernmost river in the Basque Country. This river, born in the mountains of Artzentales, joins the river Kotorrio, coming from the mining mountains of Triano, forming the estuary of Pobeña.

These rivers, especially the second, cross the mining region of Bizkaia and the quality of its waters is very bad for some time.

As for the marsh, when in 1971 the company Petronor built its oil refinery in the marsh, it suffered a brutal beating. Therefore, its width is limited to a few square meters.

However, the wonderful conditions of the marshes located between Petronor and the variant of Cantabria, next to Pobeña, next to the end of the river without pipes and the extensive and charming dunes of the beach of La Arena, have turned this estuary into one of the few areas of great ecological importance. 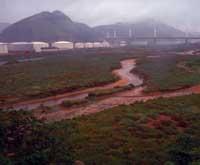 The ancient Petronor, followed by the Cantabrian briante, has been a donkey for the Barbadun River marsh. However, precious marshes are still preserved.
M. Estonba

These values have led to the inclusion of the marshes in the Territorial Sectorial Plan of Humid Areas and in the Catalogue of Natural Enclaves of the Basque Country, opening a window of hope for these last sections of marsh that have managed to overcome the violent aggressions of the human being.

In short, marine marshes are the most important ecosystems in the Basque Country from the point of view of biodiversity and productivity. Nor can it be denied that this wealth, especially the coast and the rias, along with their favorable conditions for life, has generated a human implantation.

As a result, man has long sought to adapt to his needs, paradoxically, leading to the practical disappearance of the values that have generated human attraction.

Pobeña. Ria del Barbadún. That is, one of the marshes in this estuary.
M. Estonba

This phenomenon has increased dramatically in recent decades, so very few marshes have maintained a good state of conservation to date. Some have completely disappeared and the rest are in a very serious situation.

Undoubtedly, the time has come to move from the proposal of projects, plans and management that have repeatedly praised the enormous ecological values of these areas to actions of protection, since time goes against the survival of these ecological treasures. 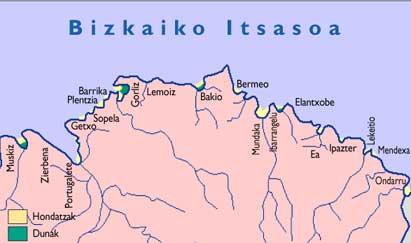 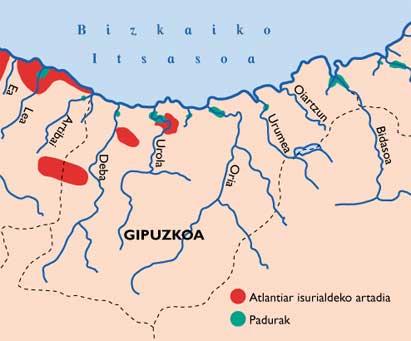