An industry that can be a source of wealth and benefit for the environment. Nobody wants a landfill in the area of the house, but it must be recognized that this type of waste and dirt storage can be the basis of a useful industry. Without going any further, among us they have also begun to see the first experiences to realize this potential. Donostia-San Sebastián has recently started collecting plastic containers to recover raw materials from the plastic industry. Glass containers and bottles are also collected in various villages of Euskal Herria, in these transhumed containers that have already become common elements of their landscape. These are only the first steps in the exploitation of waste. However, it can go much further.

One of the treatment routes is incineration. The truck unloads the garbage and then mixes to match the calorific power.

There are currently several cities in which groups of university researchers spread plastic bags after garbage collection and analyze, classify and weigh their contents. Actually this type of research is not new, as archaeologists have used the study of waste to obtain data on ancient civilizations. Today's garbage research can also bring interesting facts about this diabolical civilization.

The garbage consists of all kinds of waste: food remains, damaged utensils, dirt collected in cleaning tasks, things that have no longer been considered useful or that do not want to have more. Garbage collection services have transported its contents in trucks and dumped in landfills. At best, we can call landfills, so every day the new discharge is covered with land to avoid forgetfulness and rats.

One of the treatment routes is incineration. Incineration is done in special ovens.

When a landfill of this type fills up to saturation, you have to look for another place or other solution to face a problem that is renewed day by day. In a large city of one million inhabitants, at least in the US, it generates daily more than a thousand tons of garbage. Refuse collection trucks have to go further and further to pour their cargo, as no one wants landfills near the neighborhood they live in.

However, in this disgusting charge there are many useful materials. Iron, aluminum, copper, zinc, tin, lead and brass, among others. Real mining of all these materials can be done in landfills. A landfill can be more profitable than many mines. Some begin to say that trash can be a great source of wealth.

One of the treatment routes is incineration. The heat generated could be used to obtain electrical energy.

Engineering is working on the conditioning of mineral processing machinery to make waste profitable, such as conveyor belts, sieves, hunting and ferric separation magnets. And fans of separation of light materials: paper, plastics, leather, cuts,... Some substances may be burned for energy. A process called pyrolysis in oxygen-poor combustion chambers can decompose organic waste to extract the gas and transform it into an oily fuel as this gas cools.

Thus, in addition to recovering valuable materials and energy, the need to look for new landfills would be reduced.

One of the treatment routes is incineration. The ashes come out. These can be used to build the road base, for example.

These wonderful promises have sometimes failed, as there are experiences that have not gone as well as expected, either because of the numerous failures suffered by the facilities, the bad economic results or the harmful effects of combustion in air pollution. The organic part of the waste can also be used for fertilizer production. This idea began to develop in the 1970s. This solution can also provide other benefits. As chemical fertilizers have replaced manure the humus has deteriorated.

If they continue to do so, with the excuse of improving crops in the short term, they would only sterilize the soil in the long term. Companies like France are manufacturing fertilizers from household waste. They all use a similar procedure, sorting and crushing waste, fertilizing organic waste, granular waste or incinerating comburent waste and recovering metals.

Controlled landfill. Garbage is covered with inert matter like sand.

One of these procedures is the reduction of waste, followed by the magnetic distribution of hardware and screening of plastics, paper and textiles. These last light elements are desiccated and granulated. The ground organic part is carried to silver and there it is preserved for eight days, turning one day. In some cases, liquid organic waste such as sewage sludge is added. From now on the fertilizer can be kept in other weeks if convenient.

Once the waste is crushed in another procedure, the light elements are separated by fans. These light elements are intended for the manufacture of fuel and the rest for the manufacture of fertilizer. The fuel also vibrates. The subscriber is inserted into a rotating cylinder that circulates organic matter. After three days the organic matter is sifted and the glass fractions are removed taking advantage of the density difference.

Controlled landfill. At the end of the process, green fields are obtained.

These procedures allow obtaining 4 tons of humus and 2.5 tons of granulated fuel of 10 tons of urban waste.

This compost, extracted from the garbage, is not very famous, perhaps because it often has worse quality than is needed, with pieces of plastic and glass. Some are also working to remedy it. Biologists have researched manufacturing processes and achieved cleaner fertilizer. Granulated fuels obtained together with fertilizers have also been improved to prevent the corrosive gas from hydrogen chloride from being removed.

This improved procedure consists in the homogenization of the organic elements and their mixture with the remains of slaughterhouse and purification sludge, until obtaining a suitable moisture for fermentation. The fermentation is done in a controlled way with ventilation without pressure and maintaining the control of humidity and temperature. After two weeks the biomass expands to heal for two months. Then, taking advantage of the density difference, the pieces of glass and the metal fragments are separated. 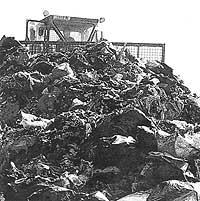 Recently another procedure has been invented that has played an important role. It is basically a method of separation of fluid and solid elements from waste. The rubbish is compressed to more than 800 bar of pressure. This accelerates the decomposition of organic elements. The resulting liquid is sold to users of organic products. The solid part can be used as fuel, but it is more unusable than the granulate and also the problem of chlorine and iron slag are not solved.

A complement to this last method is methanization. Through this process we obtain the fertilization of the organic elements and the methane generated by the fermentation. The results can be interesting, especially from an ecological point of view, but at the moment economic profitability has not been achieved.

At least it can be said that the treatment of waste generated in homes has begun to know a new stage. 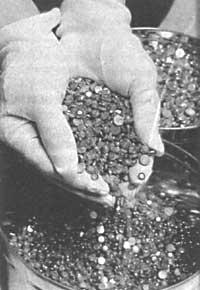 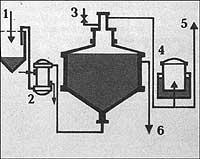