The concept of virtual reality is an ancestral concept that has been developing systems and virtual reality devices for decades. But none of them achieved a really satisfactory result and much less a success in the market, so in recent years there has been little talk of this technology. In any case, the technology has advanced a lot and lately devices and systems have actually appeared. Are we facing the definitive explosion of virtual reality? 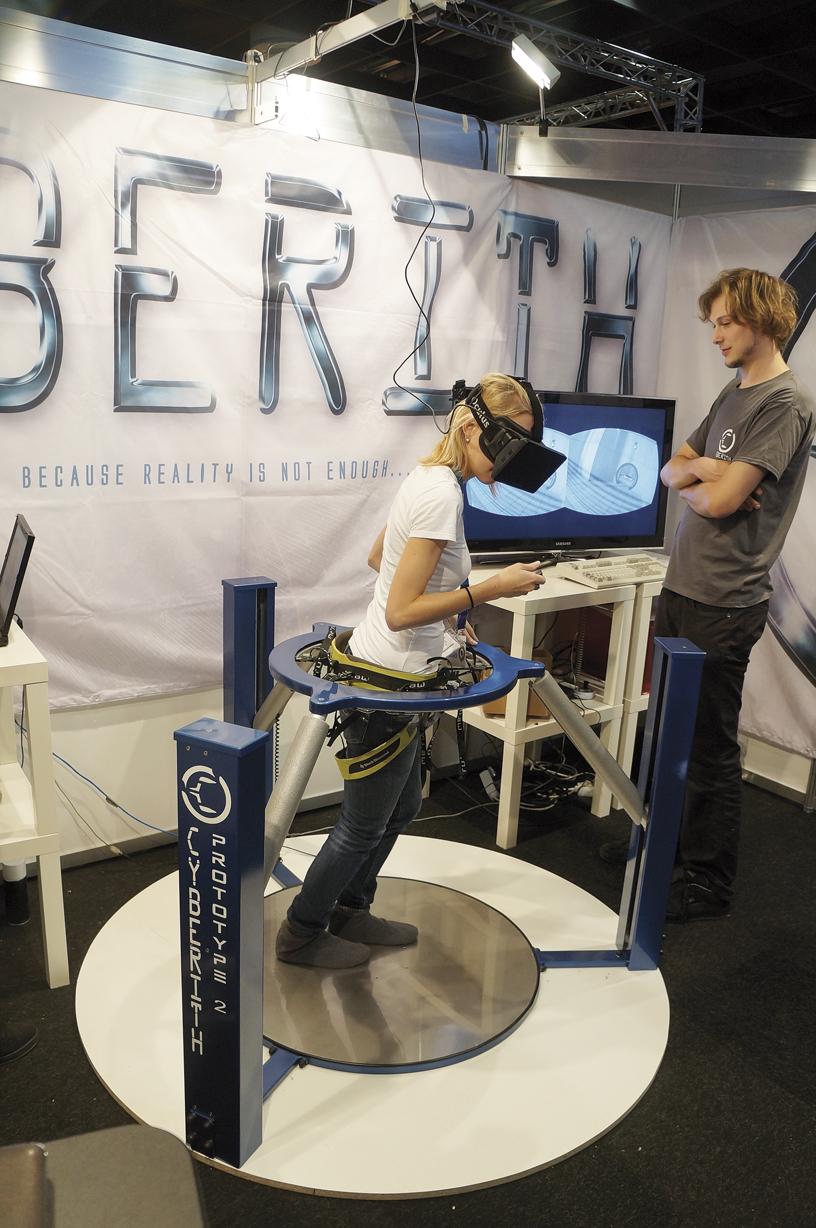 The combination of different systems (in the image, the prototypes Oculus Rift and Cyberith Virtualizer) allows you to get a real sense of virtual reality. Ed. Oleg2525/CC-BY-SA

In this world of smartphones, tablets and smart glasses, the augmented reality, that is, the incorporation of additional information to the reality that we are seeing, is the star technology (of which we speak in the article of December 2009). But before these devices arrived it was a virtual reality.

Virtual reality is to create an apparent reality through computers and other devices and give the user the feeling of being in that other reality. Normally, the virtual reality system is formed by glasses that stop seeing anything apart from this virtual world and sensors that are placed in the body to detect our movements (to reproduce our movements in the virtual world). One of the most obvious applications of this technology is video games, but it also includes practical applications such as learning to drive (cars, planes or other vehicles) or medicine (to train in surgical or relief operations, in robotic operation, etc. ).

This technology began to investigate around the 1960s and in the 1980s and 1990s there were numerous attempts to make commercial devices. But all of them failed and, for their sake, in recent years they have barely heard accounts of virtual reality. The causes of these failures are multiple: on the one hand, the glasses and sensors of that time were too big and heavy; on the other, the quality of the graphics that were obtained then was not very good; on the other hand, the computers of that time were not fast enough, the response time of the sensors and the movements of the virtual world were slow; and finally, the systems were expensive. In short, the technology of that time was insufficient for virtual reality. In the end, due to so many errors, virtual reality systems were limited to specific professional uses and have not been used in video games and massively. These types of technologies have focused on mobile devices and augmented reality for the general public.

But since then, the aforementioned technologies have advanced a lot. The synthesis images that are made are of very good quality and 3D technology has been developed a lot. Computers and graphics cards are much faster. Position and motion sensors are also very miniaturized (they exist on mobile phones), sound effects have also advanced a lot.

In this new context, virtual reality systems reappear. One that has gained fame and is in the mouth of everyone is Oculus Rift. These glasses place a screen in front of each eye, showing a different image on each screen you get a stereoscopic or 3D effect. The screens cover all our visual field and, through some lenses, show us a curved image, obtaining a very realistic effect and a feeling of immersion. In addition, they have sensors of position and movement, and the image that is projected on the screens responds to our movements. Finally, they have stereo helmets for the ears.

All those who have tried it speak very well of Oculus Rift, and at the CES Fair 2014 (Consumer Electronics Show, the most important IT and consumer electronics fair in the world) has received the award for the best device. It is not yet on sale, although the developer kit is available for the authors of video games to make games for the device, they have a lot of funding and an intention to market it soon. Many video game companies are preparing or adapting their games for the Oculus Rift. Also Steam, a leader in gaming distribution platforms on the PC, has begun testing for Oculus Rift to work.

Oculus Rift is not, however, the only indication that he has returned to curb virtual reality. Valve, owner of the aforementioned Steam platform, is convinced that virtual reality will revolutionize the world of leisure in the next two years. And it is also developing its own system like the Oculus Rift.

However, devices like Oculus Rift respond to our movements and adapt in a very realistic way what we see and hear, but for the feeling of virtual reality to be complete it is not enough to change our point of view by the keyboard but by the movements of the head. In addition, we should respond to the movements of our arms (shooting, fists, steering wheel...) and our legs (where we go, at what speed, jumps...).

The bracelet is solved long ago, as we mentioned in the article of June 2011: The Wii console detects its movements very naturally with the accelerometers of the Wiimote controller, or more recently the Xbox console with the Kinect camera without any type of control.

Devices also appear to detect the movement of the legs. In them, basically, there is a platform with a very slippery floor and poles, of which are extracted some supports that grab us from the waist and prevent us from leaving the floor, although we can turn. In this way we can or can run in the direction we want but without moving from the place. The platform detects the direction and speed and communicates it to the video game, which responds according to the movement. Examples of this type of devices are Virtuix Omni and Cyberith Virtualizer.

The combination of the aforementioned systems (i.e., a device like Oculus Rift, a kind of Wiimote or Kinect to detect the movement of arms and one of these leg detection platforms) must provide a real sense of virtual reality. They are testing with all this kind of systems and video games, and on the Internet there are really spectacular videos. At the moment they are nothing more than prototypes, but we hope we can soon see them in the street! Well, I say for the children, eh... ;-)